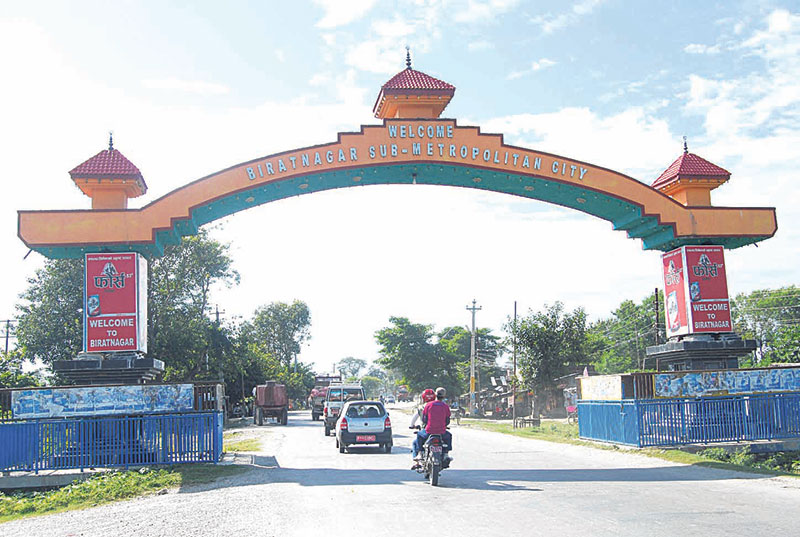 BIRATNAGAR, June 18: “Except for Koirala residence and the airport, there’s no noticeable place in Biratnagar for visitors.” That’s a statement of a noted intellectual in Biratnagar Ram Babu Dahal delivered in frustrated tone and further adding that the city, which he feels is very important for the nation, has never seen actual development.

If the pace of development is not kept on par with the growing population, things turn chaotic. Though the city’s population has grown over the decades, its roads and other public infrastructures have not been upgraded.

“Neither the government nor the locals could improve the situations. In fact, if you look at it now, things have gone worse from bad,” he stated. Biratnagar is indeed over a century year old city. Oldest sub - metropolitan city of the country however is still waiting to wear a look like one. Locals lament that the city has never received due attention of politicians and officials.

“Even after decades, no concrete measures have been taken for ensuring proper development of Biratnagar. Some current development projects related widening of roads, laying of sanitation pipes and so on, have rather disfigured this place,” remarked Dahal.

He finds never ending deadlines of these development projects. He said that the road department had partly or fully destroyed houses and fences to broaden the road long back. Along with it, other concerned authorities have also dug the roads for laying various pipelines, electricity and telephone poles have been deranged he said stating this all has made the city further chaotic.

“This has made people’s life extremely miserable, particularly during monsoon. Everything, everywhere around this city has been turned filthy,” Dahal said. He does not count new schools, colleges, hospitals and so on as indicator of development in Biratnagar, because ‘cleanliness, system and order are more important’. “If the pace of development is not kept on par with the growing population, things turn chaotic. Though the city’s population has grown over the decades, its roads and other public infrastructures have not been upgraded.”

Some ambitious projects have been going on Biratnagar since 1996. Road widening project, construction of ring road and railway lines were some of the projects envisioned then. However, they have missed several deadlines since then. According to concerned officials, the consecutive governments over the years have never released adequate budget for these projects. “These projects never made it to the priority lists of any government over the decades. Compensation to the locals still remains an unresolved issue. Along with that dishonest contractors and uncommitted politicians have marred this city’s development,” said an official with the sub-metropolitan office, seeking anonymity.

The proposed 42-kilometer ring road in Biratnagar was estimated to be constructed at a cost of Rs 1.30 billion. This much awaited project, never received budget to start, until last year. The government had released half million rupees for the project. Similarly, Bathnaha - Katahari railway line which was supposed to be completed long back, has not even started. Along with that several other projects related to sanitation and upgrading of roads are in limbo.

Twenty-five kilometer long main sewage pipeline is being built in the city with financial support of ADB. Other projects of ADB include construction of waste treatment plant and laying of sub pipelines for sewage. However, the projects have not shown good progress.

Apart from the above, a four-lane road from Jogbani to Dharan has remained in limbo since long. Some locals feel that consecutive governments have all been good at giving them big dreams, but none of them have ever shown seriousness in realizing those dreams in reality. “When road construction projects take time, it affects us in too many ways. Worst of them is the impact of dust on health,” said Dahal.

Kishore Lal Mahaju, chief of Urban Development and Building Construction Division, one of the reasons behind delays in implementation of some projects is the sluggish coordination with India. Mahaju informed India has been collaborating in some projects including construction of integrated check posts, custom points, quarantine facility for wild animals, among others. “This is an integrated project. The Indian government has built few infrastructures on their side, but not on our side as agreed,” he said. “As part of the agreement, we had to avail land for the structures. This has been completed. But has been delayed by Indian authorities,” he added.

He informed that around 65 percent of work on the Indian side has been completed while it’s not even started on the Nepal side. “We are only to facilitate, they are to implement the project,” he said adding that similar delays on railway project by Indian project has delayed its implementation. “Since these are integrated projects, projects cannot complete on time until and unless stakeholders coordinate well and on time,” Mahaju stated.

KATHMANDU, March 13: The government has forwarded a bill to parliament for bringing development projects of national priority under the... Read More...

Development work speeds up in Biratnagar

I will return to Nepal on October 6: Sandeep Lamichhane
14 hours ago