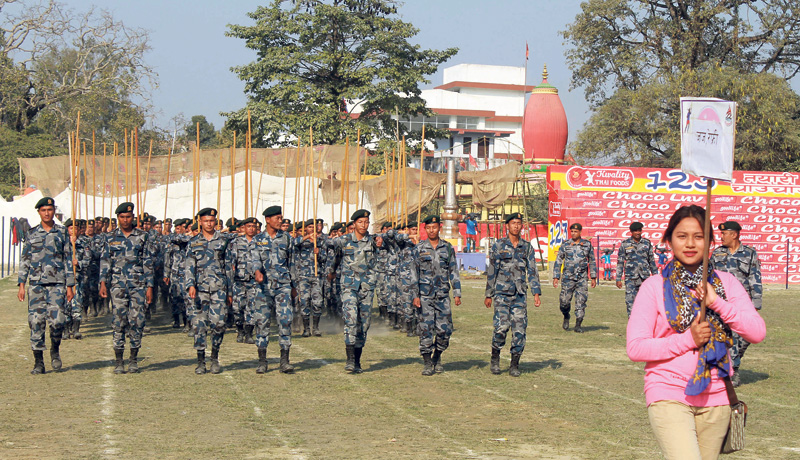 Police personnel rehearsing for the opening ceremony of the Seventh National Games at Shahid Stadium in Biratnagar on Thursday. Photo: Chuman Basnet/Republica

BIRATNAGAR, Dec 23: Five years after the completion of the last edition of National Games, Shahid Stadium of Biratnagar is all set to raise the curtain on the Seventh National Games to be held in various cities of the Eastern Region. President Bidya Bhandari is scheduled to inaugurate the eight-day sporting event on Thursday.

The Games originally scheduled to be held every two years, have been irregular since the fourth edition back in 1987. This year's games will be only the third edition of the games in 29 years. However, the biennial event started since 1981 had been successful in developing sports infrastructure in all regions of the country until the games' fourth edition.

While the Eastern Region is hosting the first-ever National Games, Shahid Stadium has been decorated and the final rehearsal for the inauguration ceremony were carried out until Thursday evening.

National Sports Council (NSC) Member Secretary Keshav Kumar Bista has said that all the preparations for the Games have been completed. According to Bista, the closing ceremony of the Games will be held at the ANFA Complex in Dharan. “The president is scheduled to inaugurate the event while the prime minister will close the games,” he said.

Security has been beefed up in Biratnagar for the president's visit. The inaugural ceremony will feature cultural shows, parade, dance and demonstratoin of sporting skills. School students, security personnel and sportspersons have been rehearsing for the inaugural ceremony. The stadium has undergone repair work and been given a fresh coat of paint.

Among the 35 games included in the National Games, the Eastern Region will host only 30 events citing lack of infrastructure. Morang, Sunsari, Jhapa, Dhankuta, Siraha, Saptari and Udaypur are the districts hosting various events.

KATHMANDU, April 30: The selection committee has selected Karate players for the 18th Asian Games which will be held in August... Read More...

PYEONGCHANG, South Korea, Feb 8:  It was a historic moment, and it happened even before the Pyeongchang Winter Olympics had officially... Read More...

BHIMDUTTANAGAR, Dec 15: Of the total 4,029 players across the country vying in 35 games during the forthcoming 7th National... Read More...

How Israel failed its Covid test
14 hours ago

Trans-Himalayan Railway project under China’s BRI could be an economic and geopolitical game-changer: Baburam Bhattarai
1 hour ago