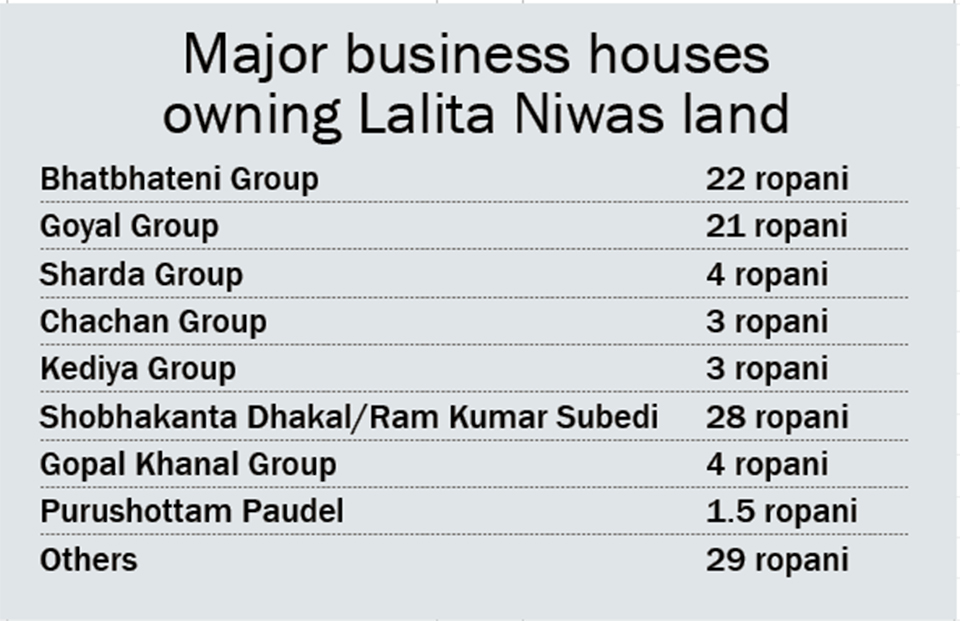 KATHMANDU, April 18: It has been revealed that the brokers, who had illegally transferred the land belonging to Lalita Niwas, partnered with over half-a-dozen business houses.

The brokers who managed to illegally transfer ownership of the land in collusion with land revenue officials, ministers, political leaders and secretaries at various ministries, are found to have sold the land to country's some of the influential business houses such as Goyal, Sarda, Chachan and Kedia groups. The government had earlier acquired the same land by duly compensating the rightful owners.

“The main reason behind why the land mafia sold the Lalita Niwas land to big business houses and those with access to power center is they felt it would be easy to settle any dispute that might emerge,” said an investigation official. “However we have clear instruction to expedite the investigation without any pressure.”

Gurung, Dhakal and Subedi had bought the land from the owners of the land from its users in 2061 BS. They had subsequently sold the land pieces to politicians, business houses, and other 'powerful' individuals.

A businessman who bought the land from them said the land was sold at Rs 600,000 to 800,000 per ana [342.25 sq ft]. The land brokers and businessmen buying the land are found to have taken huge loans from various banks including Nepal Investment Bank, Century Bank, Sanima Bank, Global IME Bank, Nepal Bank Limited, Prabhu Bank Limited, Sunrise Bank and Janata Bank.

Ruling Nepal Communist Party (NCP) General Secretary Bishnu Paudel is also found to have 'bought' a piece of the land from the same group. Paudel claimed that he bought 8 ana land from Uma Dhakal, the wife of Shobhakanta.

Chachan Business House, which has investment in Janata Bank and Mahalaxmi Finance, is found to have bought more than 3 ropani of land of Lalita Niwas.

This group is also found to have bought 4 ropani of the land in the name of its executive director Manoj Kediya from Gurung and his family members. The two masterminds of the land grab case — Dhakal and Subedi – still own over 30 ropani of the Lalita Niwas land.

Sarda Group proprietor Pawan Kumar Sarda said that he was cheated by Gurung in the land purchase deal. “Min Bahadur ji requested us to buy the land saying that it was a legally registered land. We then bought it in the name of Sarda Group and those affiliated with the Group,” said Sarda. “Why would we buy it if we knew that was a government land?”

Sarda shared that Gurung as well as land revenue officials had congratulated them saying that they had bought a good piece of land.

However, Kedia did not want to reveal anything about the land purchase. “We were told that the land was duly registered. Land Revenue Office also registered the ownership of the land in our name. We came to know only later that it was government-owned land.”

Kedia said that they will publicize their statements on the issue later, while requesting not to ask anything about the land purchase for now.

Four other individuals including Gopal Khanal, who also runs Mega College, had purchased 60 ana at the rate of Rs 700,000 per ana from the Gurung family.

Investigation officials said Election Commissioner Sudhir Kumar Shah is found to have purchased 2 ropani in the name of his wife Urmila Shah in 2049 BS and sold that land in 2061 BS.

The government has directed the Commission for the Investigation of Abuse of Authority (CIAA) and the Central Investigation Bureau of Nepal Police to further investigate the case after it came to light that ownership of a total of 114 ropani [14.33 acre] belonging to Lalita Niwas, which was acquired by the government by paying due compensation to its users then, was illegally registered in the name of private individuals. Then ministers, land revenue officials, secretaries and political leaders are also being investigated.

Coordinator of Naya Shakti Party (NSP) Baburam Bhattarai said Wednesday that all the persons involved in the encroachment the Lalita Niwas land should face the consequences of their illegal act.

Opining that the persons must have used political influence to grab the land, former Prime Minister Bhattarai said that everyone involved should face strong action irrespective of their positions.

“People have started encroaching public property, this must stop,” he told Republica. “Bhim Prasad Gautam who was the land reforms minister in my cabinet has also been linked in the scam and I have already asked him for clarification.” Former Prime Minister Bhattarai claimed that his government had not taken any decision about Lalita Niwas.

KATHMANDU, May 2: Minister for Communications and Information Technology, Gokul Prasad Banskota, has made it clear that the government would... Read More...

KATHMANDU, April 12: Government spokesperson Gokul Baskota has said that the government is committed to retrieving the land it owns at... Read More...

Ruling alliance on the verge of collapse over new president, home ministry row
14 hours ago

PM Dahal holds meeting with UML Chairman Oli, RPP Chairman Lingden
11 hours ago
Bill on money laundering to be amended through fast track process
10 hours ago
If you want to seek your property share, go to Baluwatar: MP Agrahari
8 hours ago