Bhairahawa's next mayor will face a city at crossroads 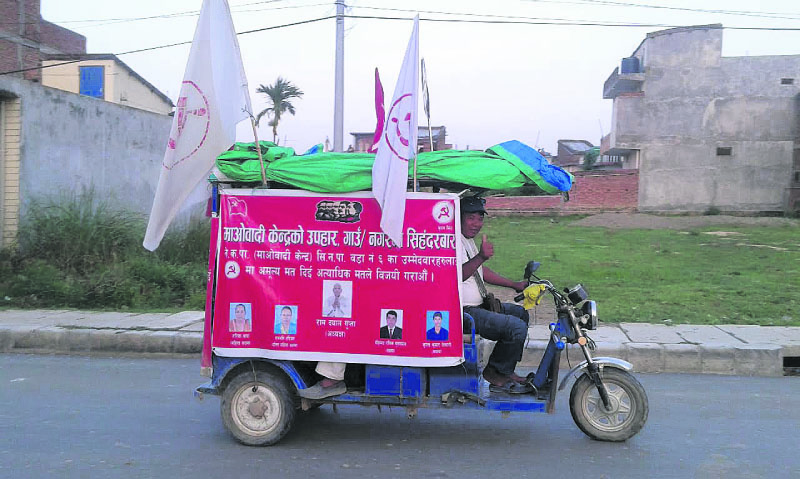 BHAIRAHAWA, June 24: Siddharthanagar Municipality's next mayor will inherit a city at a crossroads. The municipality, better known by its former name Bhairahawa, now lives in a state of utter neglect. The road, which is under construction for the last two years, is dirty and full of potholes. Power shortage is chronic. The city lacks decent health care and education systems.

"There are problems here, problems there and problems everywhere. Bhairahawa has been a victim of widespread corruption and mismanagement," said Salman Khan, a local journalist.

But there are hopes that the historic city, which is one of the oldest municipalities in the country, will rediscover its lost glory. Siddharthanagar is an ideal place to be a great city from the strategic, economic and cultural points of view.

It's one of the busiest trade and transit points with India. Tens of thousands of people from both sides of the border use this city. It's proximity with Lumbini, one of the holiest religious sites for Buddhists from across the world, makes it culturally important. Unlike other trade and transit points, it is a city with the settlement of people from all castes and creeds.

"The only thing the city lacks right now is good governance and political will. The indifference of not only the policymakers but also the public is harming the city," said Khan.

But the residents of Bhairahawa hope that the scenario will change after the elections.

Siddharthanagar Municipality will elect its first mayor in the last two decades on June 28.

"There is no need to bring new action plans or policies. We already have a lot of projects pending," Rameshwar Halwai, a resident of Siddharthanagar ward no 13 said, citing various infrastructure projects that are in the process of implementation, including the Bhairahawa  International Airport and the Greater Lumbini Circuit.

The city will stand on its own feet again if the new mayor completes the pending works while promoting good governance and transparency," said Halwai.

Realizing the aspirations of the voters, the mayoral candidates of all parties have prioritized issues of governance and local development in their election campaigns.

"Our party RPP has already unveiled a 43-point manifesto. If I get elected, I will deliver all the promises we have made. I will restore the former glory of Bhairahawa," said Sagar Pratap Rana, RPP mayoral candidate.

Matrika Prasad Yadav, NC's mayoral candidate, said that he will serve the people honestly if given the chance to lead the city.

“I will make the municipal administration more accessible to the people and promote transparency and good governance.  The current ways of doing things should change," said Yadav.

Hari Prasad Adhikari, the CPN-UML's candidate said that he hopes to promote the city as a green city.

Candidates of other parties have also been making similar promises.

Who are in the race?
Ten different political parties have fielded candidates for the June 28 elections, including the tarai-centric parties. Locals say that only the Rastriya Prajatantra Party (RPP), Nepali Congress, UML and CPN (Maoist Center) have a chance of winning the mayoral seat.

RPP's mayoral candidate Sagar Pratap Rana was the elected mayor in the last election held in 1997, while his deputy Hari Prasad Adharki is now UML's mayoral candidate. The NC and Maoist Center have respectively fielded Matrika Prasad Yadav and Faiz Ahamad Khan as their mayor candidates.

"It is very difficult to say who will win because there are so many candidates. But the RPP and the NC have a better chance of winning because of their candidate selection and agendas. The two parties enjoy relatively better public support," said Bablu Shahani, a resident of Siddharthanagar ward no 8.

Muslim Factor
Khan's candidacy is thought to have brought a new twist to the race. Many believe that most of the around 5,000 Muslim votes are likely to go to Khan. It is not good news for RPP, a party which considers Muslims as its most important vote bank.

The Muslim community had played a key role in electing RPP candidate Deepak Bohara in the second Constitution Assembly elections held in 2013. If the Muslim community rallies behind Khan, Maoist Center can emerge as a strong contender in this election.

Hills versus Madhes
There are around 33,700 registered voters in Siddharthanagar Municipality. All 10 parties which have fielded their candidates have at least 1000 to 3,000 pocket votes. The growing gulf between the Pahade (hilly) and Madhesi constituencies is likely to impact the poll outcomes. Both communities have grown suspicious of each other after the Madhes movement. There are around 18,000 Madhesi voters and 15,000 Pahade voters in the constituency.

Many expect the voters to vote the candidate from their own community. If that happens, most Madhesi votes may go to Yadav, Khan, and candidates of regional parties including Nepal Loktantrik Forum and Federal Socialist Forum Nepal. The lack of enthusiasm among Madhesi voters toward the UML is likely to affect the main opposition party. But it is in a better position to get the votes of the Pahade communities.

BHAKTAPUR, May 30: CPN (UML) candidates have been elected the mayor and deputy mayor in Changu Narayan Municipality. ... Read More...