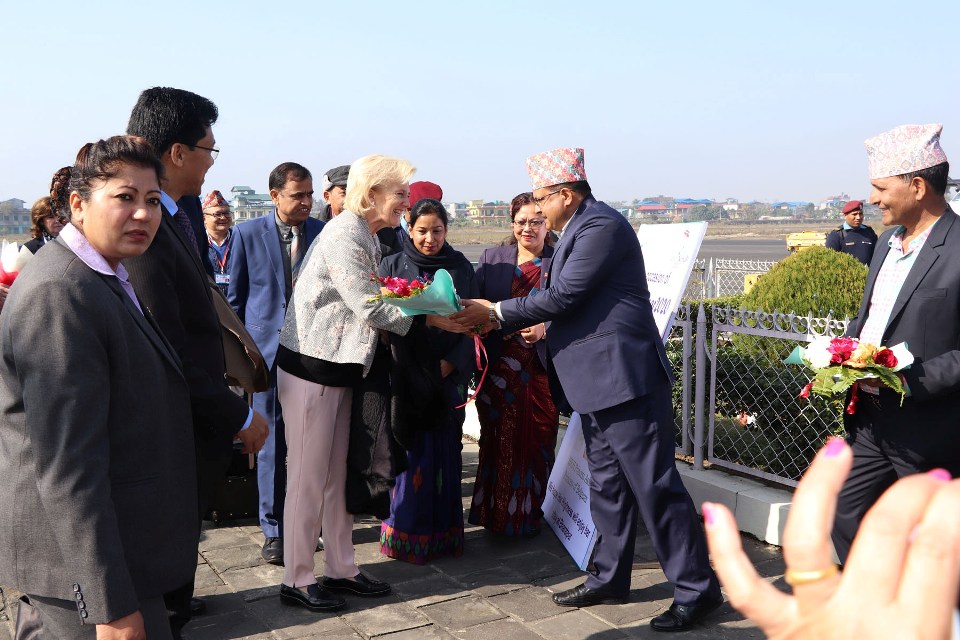 CHITWAN, Jan 22: The visiting Princess Astrid of Belgium was given a grand welcome in Bharatpur today. She arrived here in connection with attending a programme to be organized at Madhyabindu District Hospital in Nawalparasi.

Chief District Officer of Chitwan, Narayan Bhattarai and chiefs of security bodies in the district were also present. The metropolis greeted the Belgian princess right outside the airport amidst the playing of the panchaibaja.

Nepal's ambassador for Belgium, Lok Bahadur Thapa was also there to welcome Princess Astrid. On the occasion, mayor Dahal briefed the Belgian royal guest about the geography, culture and touristic significance of Bharatpur city. Ambassador Thapa also informed Princess Astrid on the importance of Chitwan district.

Princess Astrid is accompanied by her spouse Prince Lorenz among a seven-member delegation. She had arrived in Nepal on January 19 and will return home on January 25. According to ambassador Thapa, Princess Astrid has met with President Bidya Devi Bhandari, Deputy Prime Minister Ishwor Pokhrel, Minister for Foreign Affairs Pradeep Kumar Gyawali, Minister for Health Bhanubhakta Dhakal and Tourism Minister Yogesh Bhattarai, among high officials. She also visited the Bhaktapur Durbar area, the Bouddhanath Stupa, various places in Kathmandu and Dhangadhi.

Princess Astrid is scheduled to stay in Meghauli today after attending the programme in Nawalparasi. She will spend two days in Chitwan on private visit.

KATHMANDU, May 4: Referring to the letter from the party President Sher Bahadur Deuba as the official one, the District... Read More...

Apple production area in Jumla continues to expand
22 hours ago

Truth and ecstasy
22 hours ago
Kathmandu police arrests 57 for involvement in criminal activities
15 hours ago
EIB to provide Rs 12.4 billion grant to Nepal
15 hours ago

Jumla continues to be neglected
1 day ago