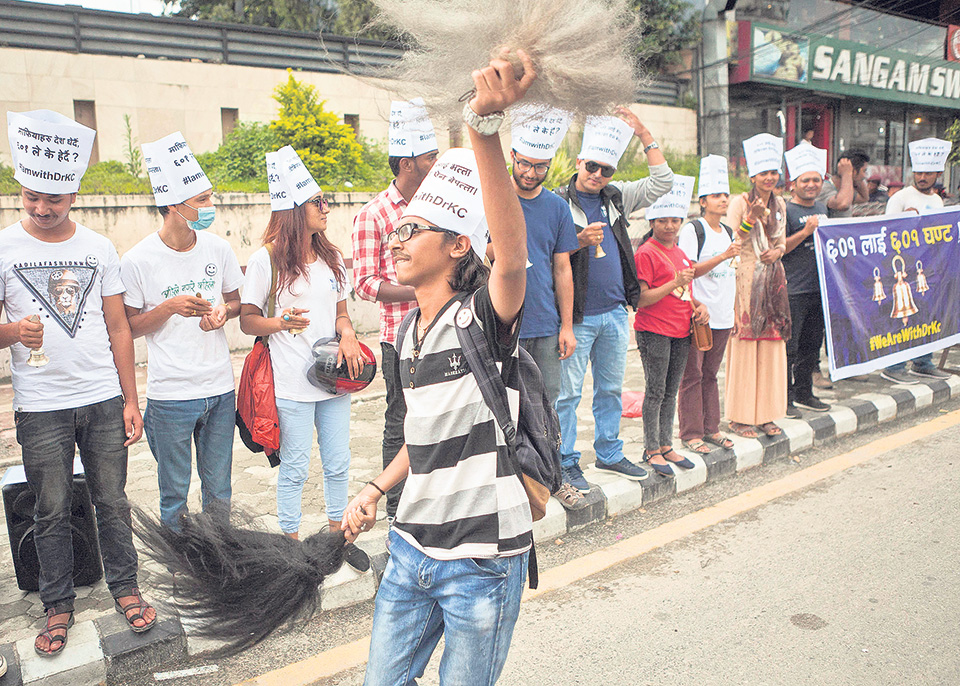 The prospect of yet another fast unto death by Dr KC has drawn different responses from different people.

If there are those who are genuinely concerned, there are also those who admit feeling exasperated. Given the doctor’s character, this kind of persistence on his part doesn’t exactly come as a surprise, but one does wonder about his supporters. Priyanka Gurung talks to members of the public who have rallied around him so far to gauge the mood in the KC camp.

When Dr Govinda KC called his 11th fast onto death recently, he managed to bring thousands of members of the public out on the streets demonstrating for the government to heed to his demands of medical reforms. What started as a noble man fighting against the system alone became a nationwide movement because of the people who rally behind him every time he calls a hunger strike.

Kedar Sharma fully supports and even encourages her daughter Aditi Adhikari, 27, an educator, to participate in the demonstrations whenever she can. Having participated in his own share of movements in the country starting from the Panchayat revolt itself, Sharma claims to have only one word of advice for the youngsters.

“You may not be actively participating in all this right now but just make sure you won’t regret it later on as well,” he says, “When you have grown some grey hair and you look back at your youth, it’s good to have stood up for yourself.”

His daughter, Aditi, confesses she is wary of holding placards because she doesn’t like her photos to be taken. She isn’t affiliated to any party either and, most of the times, doesn’t know the people present at the rallies.

She says the sole reason she continues to go to the rallies and encourages her friends to participate too whenever their work allows them is to help make the crowd of Dr KC’s supporters appear bigger.

As Aditi puts it, it’s crucial. “I do get frustrated. But what’s the other alternative,” she says.
Personally she says she refuses to be the generation that continues to turn a blind eye to the unscrupulous acts of the authorities.

Ravindra Singh Baniya, 34, a theatre artist and filmmaker speaks of similar sentiments. He shares he is considering trying to make a short clip or movie to underline the significance of the movement. Dr KC may be integral in the medical sector but he believes these marches could inspire a social movement. “I’m sure the education sector, the business sector, the development sector and more could all use a Dr KC in their own fields.”

He fears that if we don’t fight to keep up this momentum the younger generation of Nepalis might continue to be suppressed by our country’s biased system.

But Baniya admits to feeling incredibly disappointed at not spotting more familiar faces during the most recent demonstrations and rallies. Where were more of his friends, colleagues and family members?

In his opinion, the urgency of the matter right now couldn’t be more apparent. Yet he feels the movement, in many ways, is abating. So the last time he attended a meeting with a group of fellow supporters, including members from Bibeksheel, he shares he strongly urged those present to consider the shortcomings of their strategies.

Everybody agrees on the importance of Dr KC’s demands being met yet there are only thousands gathering to show their support.

“Why have we not been able to make more Nepalis feel obligated to join these marches?” he asks, “Of late, this has been bothering me more than ever. Along with demonstrations, we need to divert our attention on those factors and stir up more people.”

In regards to this conundrum, 19-year-old, Sara Pyakurel claims to have settled on an answer. “The Nepalis who are indifferent about actively joining the movement are the ones who have not personally suffered at the hands of the system. It’s as simple as that,” she says.

Though she is still a teenager, Pyakurel has been part of multiple protests and demonstrations for Dr KC’s cause. She even shares experiences of being driven off in police vans and being placed in custody. But she has apparently also realized how this kind of need to act can be singular in many cases. After joining forces with Bibeksheel, she says the interactions with the public showed her the extent to which one too many Nepalis had normalized our corrupt systems and inefficient state.

“So to shake the public out of this stupor, perhaps we should collect legit evidence of direct results of the wrong doings that Dr KC is standing against. Perhaps, we need to start visiting homes and directly talking to people,” says Pyakurel, sharing that these are all options her peers at the party are readying themselves to focus on.

Unlike Baniya, rather than being disappointed Pyakurel claims to be angry at the moment. She considers the government’s decision to not scrap the affiliation of National College while the doctor hadn’t even recovered from the 11th hunger strike as blatant disrespect.  Still, she assures that she isn’t feeling hopeless yet. In fact there is more work to be done.

Brigid Shrestha, 16, has also been helping out with the movement whenever her college schedule allows. While her work also involves assisting with the demonstrations, she shares that there are some who have only negative things to say about it.

She recalls being scolded while protesting for Dr KC. “I have been shouted at by people. They ask us why we are continuing with this when it isn’t going to make a difference. They ask why we are wasting our time,” she says.

Shrestha doesn’t deny being frustrated from time to time, but she has personal reasons to help with the cause as well. She lost her mother two years ago solely because of a doctor’s negligence here in Nepal. She also knows that she isn’t alone. Many at these demonstrations have shared similar experiences as well. Shrestha says currently she has heard parties like Bibeksheel planning stronger and tougher actions and she wants to stay put for all of these schemes to make the government adhere to the necessary reforms.

Despite their young age both Pyakurel and Shrestha discuss Lok Man Singh and Sushila Koirala’s cases in great details. They seem to be using the relatively positive endings of the two cases to muster up hope for the KC campaign as well. They agree that being active in his cause has motivated them to pay attention to politics and helped them understand its significance as well. They think it’s unfortunate that it’s not the case with majority of both their college friends but seem determined to play their individual parts in all this.

From TUTH, Dr Suman Archarya, Dr. KC’s student as well as a member of his negotiation committee says he is well aware of this rollercoaster of emotions. Back in 2015, he reveals he used to be one of those who urged Dr KC not to go on hunger strikes. Today he has apparently resigned to the fact that as a doctor this might just be his lifelong fight.

He doesn’t deny that the wait seems to have slightly dampened the spirit among his own medical community though. Comparatively, while there have been more support from the outside, he notes medical students and residents seem a little less likely to actively participate every now and then.
Nevertheless, he resorts to counting their wins. Dr Acharya lists the public’s level of awareness, the change in people’s mindsets to proposing a significant act, and he considers it all a good start.
“We started with a handful of issues like the appointment of the dean and cost of medical education but now our scope has become bigger. We are aiming for more,” he says.
He, like all the others, has the same response when asked why they want to be part of the movement – self-satisfaction. “If anything happens I will be sad, but I know I will not be ridden with guilt.”