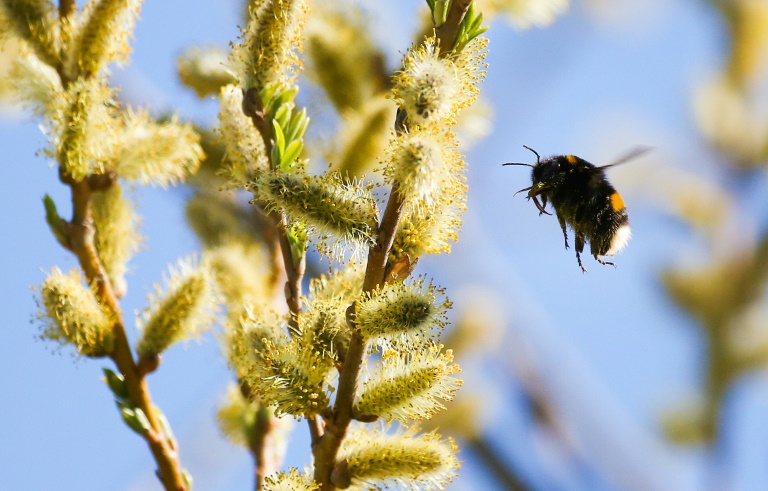 Bumblebees acquire a taste for food laced with a pesticide known to harm them, according to a study suggesting the chemicals pose an even greater threat to pollinators than previously thought.

In experiments, researchers showed that bees initially put off by sugar water containing neonicotinoids -- the most widely-used class of insecticide worldwide -- soon started seeking them out to the exclusion of untainted food.

The findings were published Wednesday in the journal Proceedings of the Royal Society B.

Neonicotinoids, earlier research has shown, disrupt the ability of bees to reproduce and lower their resistance to disease.

"At first, it appeared that the bees did avoid the food containing the pesticide," said lead author Andres Arce, a researcher at Imperial College London.

"However, as individual bees increasingly experience the treated food they develop a preference for it."

Even when the position of their feeders was switched, the pollinators made a beeline for the one laced with insecticide.

Neonicotinoids target nerve receptors in insects much in the way nicotine -- the addictive ingredient in tobacco -- does in humans and other mammals.

"Our findings... tick certain symptoms of addictive behaviour, which is intriguing given the addictive properties of nicotine on humans," said lead researcher Richard Gill, also from Imperial.

Unlike contact pesticides, which remain on the plant surface, neonicotinoids are absorbed by seeds and transported to leaves, flowers, roots, and stems as the plant grows.

Several countries have banned forms of the insecticide, mainly due to its impact on Nature's little helpers.

Canada recently announced it would phase out two neonicotinoids used on canola, corn, and soybean crops.

Widely used over the last two decades, neonicotinoids were designed to control sap-feeding insects such as aphids and root-feeding grubs.

In recent years, fears have been growing over the declining health of bees globally, and the possible role of neonicotinoids.

Pesticides have been blamed as a cause of colony collapse disorder, along with mites, viruses, and fungi, or some combination.

BANEPA, Sept 23: The Agriculture Knowledge Center based in Dhulikhel has started to collect vegetable samples from Panchkhal and Kerabari areas... Read More...

The global climate is changing, threatening, and causing risk to agricultural production system. It has imbalanced the world’s food security... Read More...