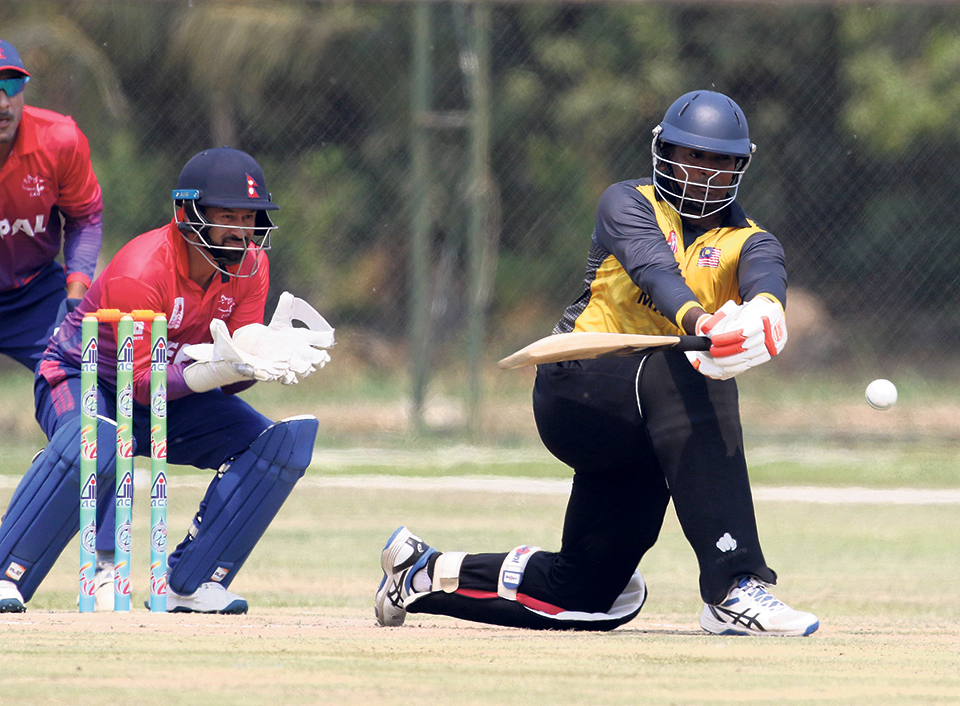 This is Nepal’s first loss against Malaysia in T20I cricket.

Nepal needed 45 runs in remaining 33 deliveries with seven wickets in hand. However, Malaysian bowlers led by Sharvin Muniandy who registered a match-winning four wicket haul to upset ODI nation Nepal in the opening match of the qualifiers.

Fresh from a 5-0 demolition of Hong Kong in a T20I bilateral series in the build up to the tournament, Malaysian bowlers held their nerves in a tricky situation. Khizar Hayat, Syazrul Idrus, and Pavandeep Singh shared two wickets each in a complete bowling performance helping player-of-the-match Muniandy.

Nepal’s captain Gyanendra Malla and Dipendra Singh Airee top-scored with a score of 38 runs each but failed to play long innings, costing the match.

Malla scored 3 boundaries and a six during his 33-ball stay whereas Airee took longer time to pace his innings.

He scored 38 runs off 40 deliveries which included a solitary boundary.

Similarly, Pawan Sarraf was the only other double-digit scorer with 19 runs off 14 deliveries which included a boundary and a six.

An experiment to open with Kushal Malla failed with teenager being dismissed for two-ball duck.

Likewise, former captain Paras Khadka’s slump with the bat continues with nine runs off 10 deliveries before holding a catch to Ahmed Faiz off Idrus.

He smashed four boundaries and two sixes during his innings which proved out to be a difference between the two sides.

He shared a crucial partnership of 63 runs with Aminuddin Ramly for the sixth wickets. Ramly chipped in with a timely cameo of 29 runs off 18 deliveries which included two boundaries and a six.

He smashed three fours and two sixes during his 29-ball stay.

Sandeep Lamichhane was pick of the bowlers for Nepal scalping three wickets in his four overs.

Karan KC dismissed Ramly who was looking dangerous at the end of the innings. Pawan Sarraf picked up four catches in the match.

Malaysia top the league with two points after the win along with Singapore which defeated Thailand on the same day.

Thailand was bowled-out for 96 runs chasing the Singapore total of 139 runs. Sidhant Singh top-scored for Singapore with 59 runs in a 43-run win.

Nepal will face Hong Kong in a must win match on Sunday whereas Thailand will lock horns with Malaysia on the same day.

KATHMANDU, May 19: The friendly matches against Malaysia scheduled for May 22 and 24 are expected to be a solid beginning... Read More...