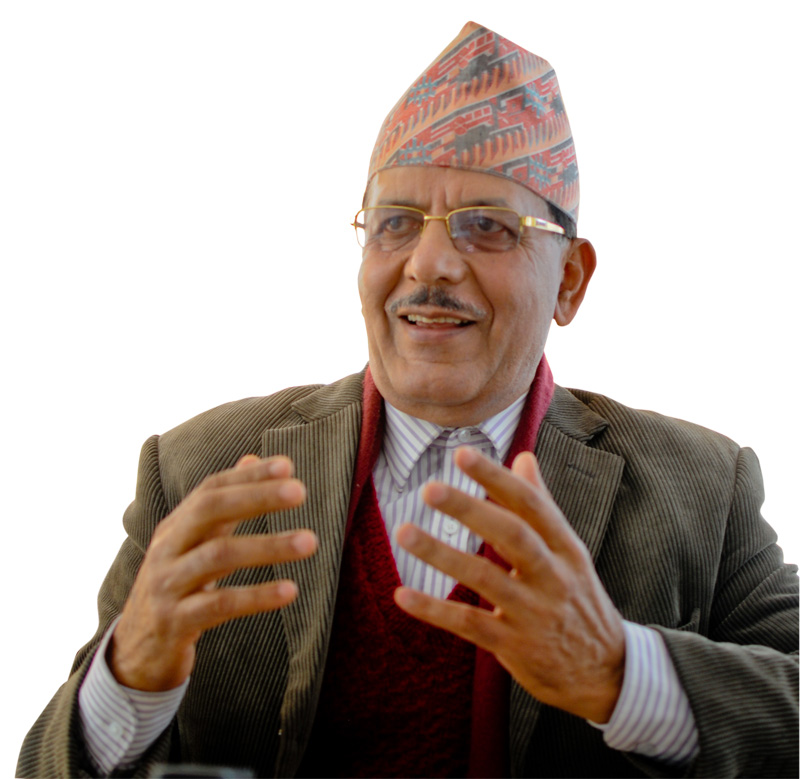 The frustratingly slow vote counting process has dented the great public enthusiasm for local election. Many of them are asking if there is a way to make this process faster during the second phase. Perhaps using electronic voting machines is an option? Neel Kantha Uprety, the Chief Election Commissioner during the second Constituent Assembly elections in 2013, offered his views on these and other election-
related issues in an interview with Republica’s Mahabir Paudyal and Bhadra Sharma.

The vote counting process after the first phase of local election has been frustratingly slow. What accounts for this?
One of the characteristics of democratic elections is quick counting and declaration of the winners. If the process of counting and winner declaration is delayed for long, it makes voters suspicious. This is why counting has to be transparent, fast and credible. I agree that counting has been frustratingly slow. I am dismayed that the Election Commission is not doing much to expedite the process. That said, vote counting in local election is complicated. You have seven cast votes in a single ballot paper. Thus one paper is, in a way, equivalent to seven ballot papers.  This is why the process is time consuming. But why were plans not in place to make the process faster and more efficient?

I had suggested to the Election Commission that it should properly train counting managers and use technology to mark ballot papers and display the results on the wall.

For example, if every ballot paper could be displayed electronically on the wall, you would not have to show the same ballot paper to every single party representative in the counting centers. This could have made the process faster. The counting process could have been made semi-automated with the use of cameras. We did none of this. Only when the counting process started did the Election Commission start adding to its human resources to speed up the work. That could have been done in advance.

How long should it ideally take to complete vote counting?
It all depends on the local context: the political climate, use of technology in voting and counting and on other factors. Afghanistan has a history of holding ballot boxes for many weeks after election. After its parliamentary elections in 2005, Afghanistan undertook a painfully slow vote-counting process. There was recounting in several places. But Nepal cannot be compared to Afghanistan because we have been conducting polls regularly. If you exclude the Afghan case, you can say Nepal has witnessed perhaps the slowest and the most tedious vote counting in the world. People anxiously wait for the results but it takes two hours to count three ballots. Our counting process is pathetic.

If so what can Election Commission do to ensure counting in the second phase is faster?
I believe the counting for the first phase will be completed in a couple of days. For the second phase, the commission needs to start arranging logistics for counting right away. It should also start training counting managers. All this can be done within a few days.

Is there any other way to expedite the counting process?
I had proposed sometime back that we could count votes at polling centers. Even this process could take time given the nature of local polls and the kind of ballot papers we are using, but since the counting process would be widely distributed among polling centers, it would also be much faster. Polling officers of each center would oversee the process and submit final reports. When reports from all centers within an electoral unit are gathered, the outcome would be declared. Some people think this is not viable from security point of view. But in local election it is the voters who guard ballot boxes and ensure that every vote is properly counted. Bangladesh has this system. I had proposed this idea to the political parties as well as Election Commission.  But political parties did not like it, even though the commission was positive. Political parties were opposed to this idea as they thought since not all polling officers are legal officers they cannot be entrusted with vote counting.

It is vital that the Election Commission starts training counting officers right away and starts exploring  other viable options. After the bitter experience of counting witnessed after the first phase, we must not repeat this mistake in the second phase. Delay in vote counting makes people suspicious about the election process and they may reject the final outcome. This happened in Kenya in 2007. The country witnessed a bloody post-election violence precisely because the vote counting process was very slow.

Why can’t we use electronic voting machines (EVMs) in our elections?
When we introduced EVMs in Constituent Assembly polls, we had borrowed them from India, which has been voting electronically since 1985. We had borrowed their voting machines without changing their specifications. We used those machines in a few constituencies in Kathmandu and in by-election in six constituencies in 2008 and 2013 polls. This could be done because Indian machines were compatible with ‘one-vote one-candidate’ and ‘one-vote one-party’ system. We could not have borrowed the same types of machines for the local polls, because you require seven marks in one ballot paper.

Instead, we could have developed indigenous machines and built software to suit local needs. But Election Commission could not do so because it had to do so many things in a short time span. It had to complete all preparatory works within around 80 days. This is a very short time in which to prepare for an election.

Besides, if you use machines for voting, you also need rigorous voter education. You need to go door to door with the machines and teach the people how to vote. You need to develop the system, test it and make sure that it really functions before you put it to use. It also requires polling officers to be properly trained on EVM system.

But once you perfect the system, you can safety implement it for many years. In the upcoming provincial and federal elections, we can introduce EVMs if we sincerely work towards this from now.

EVMs not only prevent rigging but also discourage booth capture. Since machines do not tell you who cast the vote, it may be captured by some groups. But Indian machines are developed in such a way that one machine can receive a maximum of 90 votes in an hour.

This reduces the changes of registering fake votes. The best thing would be if we develop machines based on our needs rather than importing them from elsewhere. It won’t be that difficult because we have human resources for it. I don’t think political parties will oppose EVMs because some of them, like Nepali Congress, have used them in their party elections.

The government has increased the number of local units in Tarai plains on the eve of the second phase. Does this not violate election code of conduct?
Changing electoral map between two phases of same election is not allowed anywhere. This is against national and international norms, nor does our election code of conduct allow this. But strangely there has been no opposition to this except from some opposition leaders. Changing of electoral map has raised questions about feasibility of election in the local units that have been added. But the final authority to hold election is the Election Commission and it has not said election will be impossible under that condition. But this surely adds to the commission’s burdens as it needs to create new voter lists and print new ballot papers. But since Election Commission has said it is up to the task, let us hope it can do it. But if I were the head of commission, I would not accept change of electoral map in the last minute.

And how do you see the open violation of election code of conduct? No party seems to be abiding by it.

The code of conduct does not seem to apply to our government ministers and political parties. They seem to have made violation of election code an acceptable practice. It raises question about for whom the code was devised. Was it only for the local governments which are yet to be formed? Does it not apply to the central government?
The government is bringing budget before the second phase. The government is being changed in between two elections. Key officials are being appointed and transferred and new projects inaugurated. So our ministers seem to be above the election code. But except for some party leaders and media outlets, nobody is speaking against code violation. Even Election Commission has not taken firm action against the violators. But this is setting a dangerous precedent. Future governments will now think they can safely engage in gerrymandering, distribution of state resources and changing of electoral boundaries at last minute. This way our electoral system will soon lose its credibility, both nationally and internationally. This is a worrying sign.

I don’t know about the kind of compromises the Election Commission has been forced into.  May be they are compelled to accept some breach of code. But in the pretext of transition and political disputes, every political actor seems to have silently accepted code violation as legitimate. The commission seems to have done the same. But like I said, we are setting a dangerous precedent.

The decision of Election Commission to bar foreigners from observing local election seems to have displeased the diplomatic community. How do you see it?
International observers were not invited for observation of local elections in the past as well. Only observers from within the country are allowed to observe local elections. So this recent government decision should not have been an issue for our foreign friends. But, yes, if our development partners and diplomatic missions in Kathmandu could depute their personnel to visit polling stations, it would have provided vital international feedback for the Election Commission. This is why we had allowed diplomatic corps to go as observers in 2008 and 2013 CA elections. But this time, the Election Commission allowed such visits only within Kathmandu valley. They should have been allowed to go out of the valley as well. I hope commission considers this before the second phase.

Canadian citizen busted on the charge of pedophilia
21 hours ago