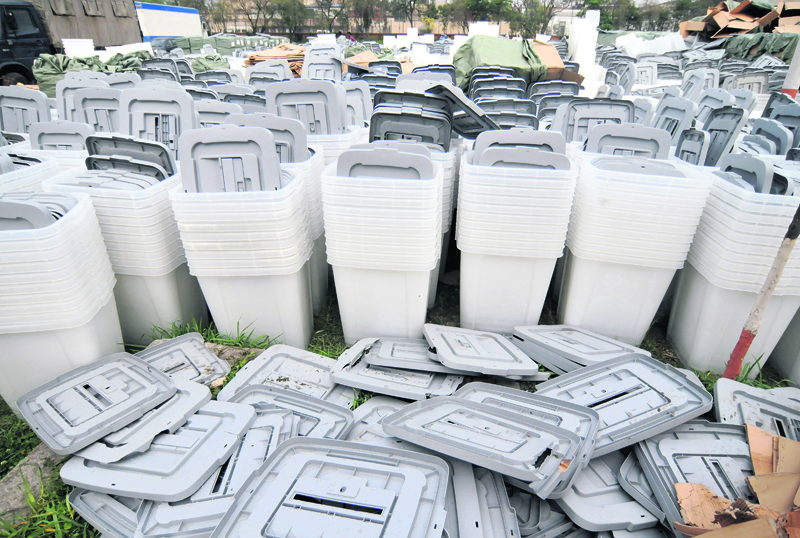 Counting of ballots to start only after all voting ends

KATMANDU, Nov 24: As the Election Commission (EC) and the political parties  have agreed to begin vote counting only after the casting of  ballots in both  phases of the parliamentary and provincial assembly elections are complete, safeguarding the ballot boxes for days is going to be a challenge.

Unlike in the recent local elections, the election offices will not  count the votes. Instead, the ballot boxes will be transported to the district headquarters of the 32 districts where first phase elections are taking place and stored there for nearly  two weeks.

Political parties have reached an understanding to begin the vote counting only when the second phase elections scheduled for December 7 are completed. They argue that the initial poll results may influence voters in the next round of elections. But stakeholders are worried the ballot boxes might be destroyed while  being transported from polling booths to the district headquarters.

“The army should not be allowed to guard the ballot boxes as we generally believe these should be kept under civilian control. So, keeping something precious  like diamonds safe for days remains a challenging job,” said former chief election commissioner Bhojraj Pokharel, “Let's see how the EC manages it.”

The EC is conducting the parliamentary elections in two different phases, contrary to the previous practice of holding it in a single phase across the country.

Chinese-made ballot boxes   are fragile. Some say the boxes can be damaged by disgruntled parties or even by mice  if full care is not exercised. In some  remote villages, it takes more than a day just to collect the ballot boxes.

Pokharel,  a Jennings Randolph senior fellow at the United States Institute of Peace, said mistrust could  widen if  there are any untoward incidents  and a party fearing defeat in the election can destroy the ballots along the way. “If things are not arranged properly disputes could emerge. So, the ballot boxes should be kept in the safest places and the authorities should adopt all  measures to ensure safety,” he said.

A serious dispute  emerged in the 2013 Constituent Assembly elections after the Maoists accused the Nepal Army of replacing ballot boxes while they were being kept at the barracks in course of being transported to  district headquarters. The Maoist party boycotted the vote counting. The dispute was settled after a parliamentary committee was formed to probe  accusations of  rigging.

Officials at the EC say ballot boxes will be transported to the district headquarters soon after the voting is over. They plan to keep the ballot boxes at the district administration office, and police, the district coordination committee and representatives of  contesting parties will be   on guard   until the vote counting begins on December 8.

“Obviously, keeping ballots safe for days is a difficult task. But local election offices are fully mandated to handle the elections. Hope, they will manage it properly,” said Election Commissioner Ila Sharma.

The role of being an active citizen is not only confined to owning a citizenship certificate or singing the country’s... Read More...

MUGU, Nov 26: Just a day before the first phase of parliamentary and provincial elections, the District Election Office of Mugu... Read More...