Balen hits back at Oli, says ‘landless squatters have only become your vote bank’

KATHMANDU, Nov 30: Taking strong exception to the remarks of CPN-UML Chairman KP Oli on his drive to clear land encroached upon by squatters, Mayor of Kathmandu Metropolitan City (KMC), Balendra Shah has asked Oli why the latter failed to see the 32 years of suffering of the squatters.

Addressing Oli on his official facebook page, Balen said that Oli’s comment on “a task being carried out by the Kathmandu Metropolitan City to fulfill its responsibility as per the request and in coordination with the empowered Bagmati civilization [High Powered Committee for Integrated Development of the Bagmati Civilization]” was expected and normal.

On Oli's opinion about the campaign launched by the metropolis to remove the squatters’ settlements from the banks of the Bagmati River, Shah commented through social media that he did not see Oli taking the leadership of the state structure many times.

“It is normal for you to have such an opinion. Because even though 14 commissions have been formed after 2047 BS (1990), none of them could solve the problem of squatters in Kathmandu. You became a minister many times and even the prime minister of a two-thirds majority government, but you did not see the 32 winters that the squatters spent on the riverbanks, suffering. The squatters are just a vote bank for you. Instead, you used them in things that were in your own interest, such as the Guthi movement. That too for political self-interest," Shah hit back at Oli 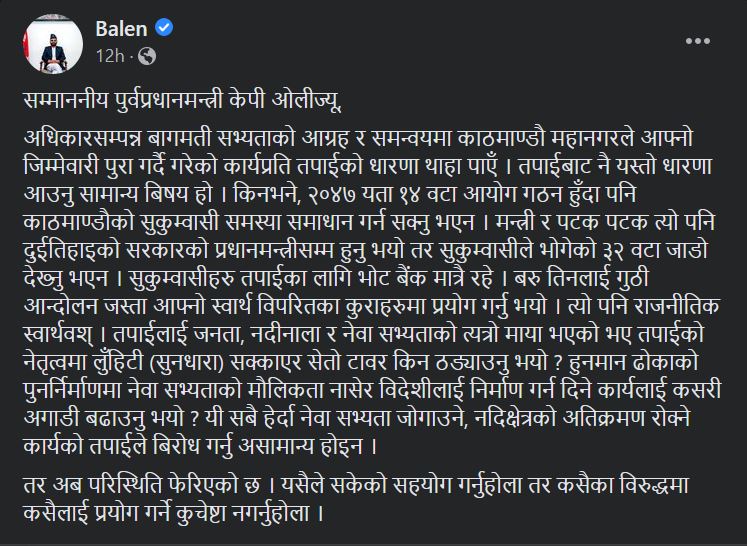 ITAHARI, June 26: Five years ago, Balutun Khatun’s cottage on the bank of the Chatara Canal in Ramdhuni-2 was demolished... Read More...

RATNAGAR, Aug 19: Minister for Land Reform and Management, Bikram Pandey, has said that the Ministry would devote to resolving problems... Read More...