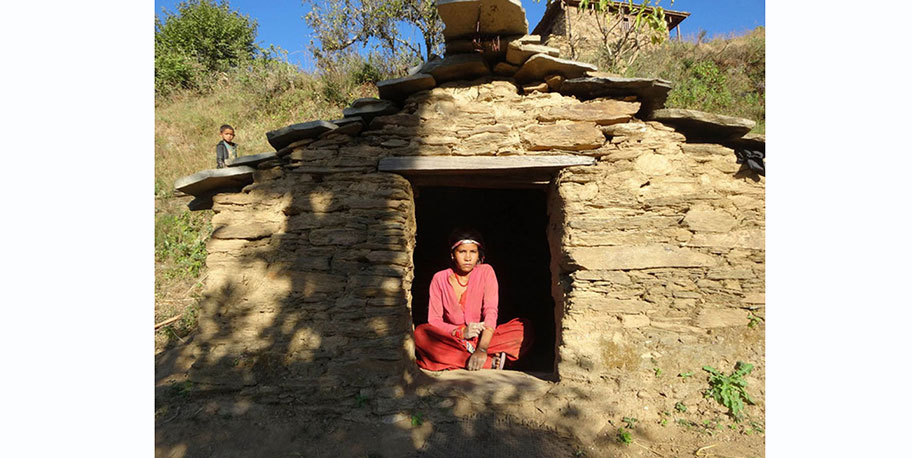 BAJURA, Jan 16: The District Police Office has launched a campaign to dismantle chhaugoth, a small hut designated for menstruating women and girls away from house.

The deep-rooted practice of Chhaupadi is taking its toll especially in the western and far western districts wherein menstruating women and girls are forced away from house. They are deemed to be impure during their period. This exposes them to dangers like animal attacks, rape and other deadly circumstances, leading to their death in some cases.

Some days earlier, a woman and her two children were found dead in a 'menstrual hut' in the district. The woman was forced into the hut to follow the Chhaupadi as she was menstruating.

In the first phase, a police team has been mobilised to 14 different areas of Badimalika Municipality to identify and collect the number of chhaugoth, said Deputy Superintendent of Police Uddhav Singh Bhat. "We have a strategy to indentify and collect number of chhaugoth in the first phase. We have started out from the municipality. It will be gradually expanded across the district," he said. So far more than 80 chaugoths have been spotted in the course of collecting their data in some areas of Kolti bazaar, he said.

Likewise, 49 chhaugoths have been found in Tribeni Municipality-6. "We will dismantle them in the presence of local authorities," he said. RSS

DOTI, Dec 21: The drive to demolish Chhaugoth – an outdoor shed where women or girls are kept during menstruation... Read More...

BAITADI, Jan 27: The District Administration Office, Baitadi has said there is no chhaugoth in the district. Chhaugoth is a... Read More...