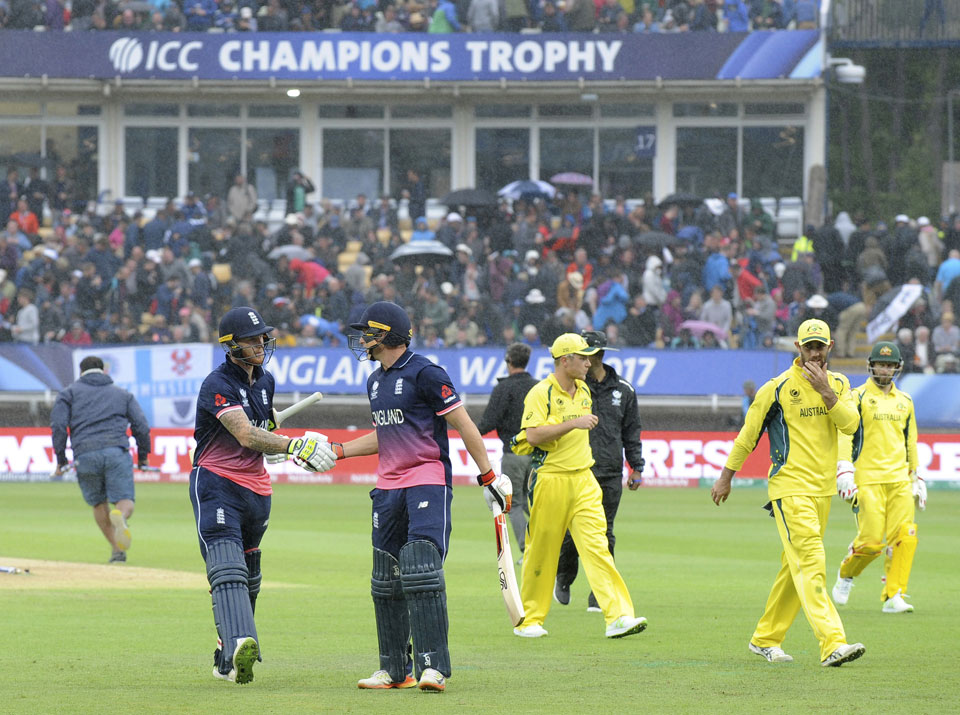 BIRMINGHAM, June 11: Australia was eliminated from the Champions Trophy by its fiercest cricketing rival as Ben Stokes smashed a career-best 102 not out in England's rain-affected 40-run win at Edgbaston on Saturday.

Frustrated by washouts against New Zealand and Bangladesh in its opening two matches, the world champions finally played to a result in Group A, but will return home having not completed a full game in this tournament.

A late collapse — precipitated by a wonder-catch on the boundary from Jason Roy — saw Australia stumble to 277-9 off its 50 overs on a good pitch. England slumped to 35-3 before a 40-minute rain delay, but captain Eoin Morgan (87) and Stokes compiled a match-defining 159-run stand for the fourth wicket.

England was 240-4 after 40.2 overs when more rain arrived at the central England venue. The players jogged off and didn't return, sealing a victory for England by 40 runs using the Duckworth-Lewis-Stern scoring method.

England advanced as the group winner after three straight wins and will be joined in the last four by tournament outsider Bangladesh, which finished in second place on three points — one more than Australia — courtesy of its win over New Zealand on Friday.

The English will likely play either Pakistan or Sri Lanka, with Bangladesh set for a match against the winner of South Africa-India at The Oval on Sunday.

Since clinching a second straight Champions Trophy title in 2009, the Australians haven't won any of their six games in the tournament across two editions, held in England and Wales in 2013 and '17.

"When you're playing in a big tournament for your country, you need to step up and get the job done. We weren't able to get that done on this occasion, unfortunately," Australia captain Steve Smith said.

"We had some frustrating games throughout and just haven't been able to find any momentum."

They arrived in Britain this time with their players embroiled in an industrial dispute with governing body Cricket Australia over the terms of a new pay deal. It has been the subject of regular questions over the past week but although it is clearly a major issue in the background, it wasn't the reason for Saturday's loss.

"We were off with our execution," Smith said, "and you can't be off when playing against players like that."

Put into bat, Australia was motoring along at 239-4 in the 43rd over when middle-order dangerman Glenn Maxwell (20) swiped a hard, flat shot off paceman Mark Wood that was heading for a six until Roy reached above his head for a brilliant catch.

Teetering next to the boundary edge, Roy threw the ball into the air to avoid carrying it over the foam marker and hopped either side of it before collecting and completing an extraordinary play.

England seized control, taking the next four wickets for nine runs off 20 balls as Wood finished with career-best ODI figures of 4-33 and legspinner Adil Rashid claimed 4-41.

Emerging from the rain delay in a difficult situation following the dismissals of Roy (4), Alex Hales (0), and Joe Root (15), Morgan and Stokes still managed to play with the freedom preached by England's Australian coach Trevor Bayliss since his appointment in 2015.

Their partnership contained 106 runs in boundaries, with Morgan clubbing eight fours and five sixes before getting run out by Adam Zampa after a mix-up going for a single.

Stokes hit two sixes and 13 fours, the last of which completed his third ODI century and took him one run past his previous best score.

"His potential is through the roof," Morgan said of Stokes. "Very calm with the crease, very relaxed. All those games he's played (in the IPL for Rising Pune Supergiant) really came to the fore today. He was outstanding."

Only one more ball was delivered before the rain arrived, leaving Jos Buttler in the middle with Stokes on 29.

"Beating a side like Australia in a game where we've nothing to gain is a big step forward for us," Morgan said, "because we beat one of the better sides around the world."

LONDON, July 30: England are still basking in the glow of an epic World Cup triumph but if anything can... Read More...