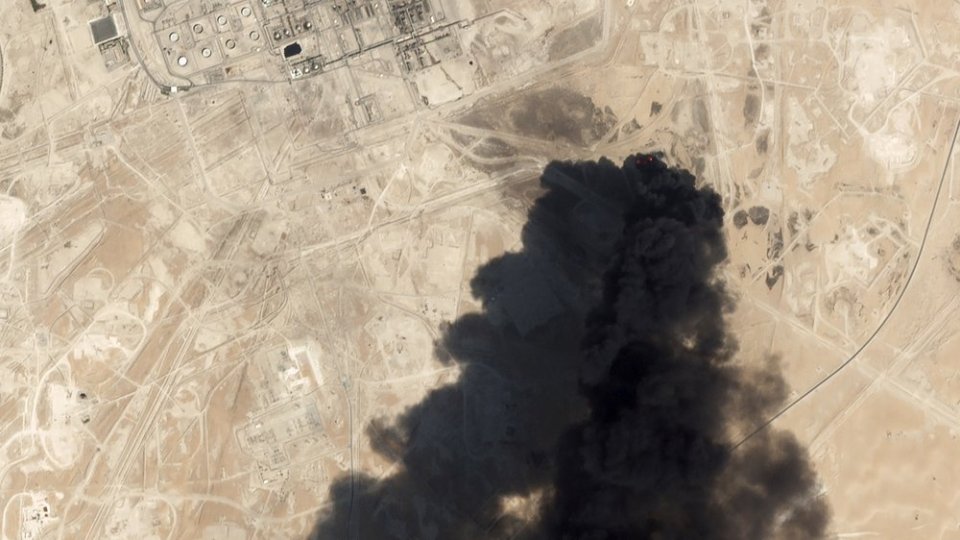 Iran called the U.S. claims “maximum lies,” while a commander in its paramilitary Revolutionary Guard reiterated its forces could strike U.S. military bases across the Mideast with its arsenal of ballistic missiles. A prominent U.S. senator suggested striking Iranian oil refineries in response for the assault claimed by Yemen’s Iran-backed Houthi rebels on Saudi Arabia’s largest oil processing facility.

“Because of the tension and sensitive situation, our region is like a powder keg,” warned Guard Brig. Gen. Amir Ali Hajizadeh. “When these contacts come too close, when forces come into contact with one another, it is possible a conflict happens because of a misunderstanding.”

Actions on any side could break into the open a twilight war that’s been raging just below the surface of the wider Persian Gulf over the last months. Already, there’s been mysterious attacks on oil tankers that America blames on Tehran, at least one suspected Israeli strike on Shiite forces in Iraq, and Iran shooting down a U.S. military surveillance drone.

The attack Saturday on Saudi Arabia’s Abqaiq plant and its Khurais oil field led to the interruption of an estimated 5.7 million barrels of the kingdom’s crude oil production per day, equivalent to over 5% of the world’s daily supply. It remains unclear how King Salman and his assertive son, Crown Prince Mohammed bin Salman, will respond to an attack targeting what analysts describe as the heart of the Saudi oil industry.

“Amid all the calls for de-escalation, Iran has now launched an unprecedented attack on the world’s energy supply,” Pompeo wrote. “There is no evidence the attacks came from Yemen.”

The U.S., Western nations, their Gulf Arab allies and U.N. experts say Iran supplies the Houthis with weapons and drones — a charge that Tehran denies.

U.S. officials previously alleged at least one recent drone attack on Saudi Arabia came from Iraq, where Iran backs Shiite militias. Those militias in recent weeks have been targeted themselves by mysterious airstrikes, with at least one believed to have been carried out by Israel.

“The Americans adopted the ‘maximum pressure’ policy against Iran, which, due to its failure, is leaning towards ‘maximum lies,’” Mousavi said in a statement.

Iraq “abides by its constitutions that prevents the use of its lands to launch aggressions against neighboring countries,” the statement said.

Houthi leader Muhammad al-Bukh reiterated his group’s claim of responsibility Sunday, telling The Associated Press it exploited “vulnerabilities” in Saudi air defenses to strike the targets. He did not elaborate.

Iran, meanwhile, kept up with its own threats Sunday as well. Hajizadeh, the Guard brigadier general who leads its aerospace program, gave an interview published across Iranian media that discussed Iran’s downing of the U.S. drone in July. He said Guard forces were ready for a counterattack if America responded, naming the Al-Udeid Air Base in Qatar and Al-Dhafra Air Base near Abu Dhabi in the United Arab Emirates as immediate targets, as well as Navy ships in the Persian Gulf and the Arabian Sea.

“Wherever they are, it only takes one spark and we hit their vessels, their air bases, their troops,” he said in a video published online with English subtitles.

“Iran will not stop their misbehavior until the consequences become more real, like attacking their refineries, which will break the regime’s back,” Graham wrote on Twitter.

All this comes before the United Nations General Assembly, which will draw world leaders to New York in a little over a week’s time. There’s been speculation in recent weeks of a potential meeting between Trump and Iranian President Hassan Rouhani on the summit’s sidelines, possibly in exchange for the lifting of some economic sanctions the American leader imposed on Tehran after unilaterally withdrawing from the atomic accord over a year ago.

If Iran had a hand in Saturday’s attack, it could be to bolster their position ahead of any talks, analysts say.

“The main point for Iran, in my opinion, is not necessarily to derail a meeting between Trump and Rouhani but to increase its leverage ahead of it,” said Michael Horowitz, the head of intelligence at the Bahrain-based risk management firm Le Beck International. “By carrying out such a major attack, Iran wants to send the message that the only way to decrease tensions is to comply with its demands regarding sanctions relief.”

However, he warned there could be a danger for Iran “overplaying” its hand.

“There will be no political benefit for Trump in a meeting with Rouhani if this meeting sends the message that the U.S. simply surrendered to Iranian demands,” he said.

There was no immediate impact on global oil prices from the attacks as markets were closed for the weekend. Benchmark Brent crude had been trading at just above $60 a barrel. Analysts, however, anticipate a spike in oil prices when markets reopen Monday in response to the attack.

Saudis blame Iran for drone attack amid calls for US strikes

DUBAI, May 17: Saudi Arabia accused Tehran of being behind a drone strike that shut down a key oil pipeline... Read More...

DUBAI, UAE, Sept 19: Iran’s top diplomat said Thursday that any attack on his country over a drone-and-missile strike on... Read More...