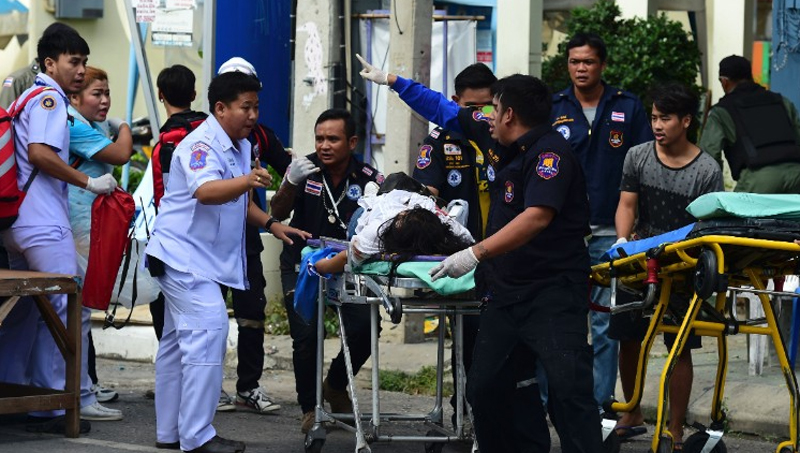 BANGKOK, Aug 12: "There is no evidence that this is linked to international terrorism," Pingmuang told a news conference Friday.These incidents are different from the usual terrorism acts, they are more local sabotage on certain locations and provinces," Pingmuang said following at least eight blasts at three separate cities.

He added that the blasts are not linked to the bomb attack at the Erawan Shrine in the capital, Bangkok, last year.

Three Thai cities have been hit by at least eight explosions in a span of about 12 hours, according to police officials.

At least two people are confirmed dead and at least 15 others are injured, authorities said.

No one has claimed responsibility for the blasts -- and it's not clear if they're connected.

The series of blasts come days before the one year anniversary of the Erawan Shrine bombing,  which killed 20 people.

The series of explosions started Thursday night in the resort of Hua Hin. Two bombs placed near a local bar went off within a few minutes of each other as foreign tourists were leaving to go back to their hotels, Police Lieutenant Colonel Samoer Yoosumran said.

In that incident, one woman working at a food vending cart in front of the bar was killed and at least 11 people -- mostly foreign visitors -- were injured.

Edwin Wiek, who has lived in Thailand for almost 30 years, said one bomb was near the London Bar, not far from the Hua Hin Beach.

He tweeted a photo of a planter that was blown apart in one of the blasts.

Two more bombs went off Hua Hin, and the southern city of Surat Thani and the resort island of Phuket were each hit by twin blasts, police said.

In Surat Thani city, the explosions occurred at 8:01 a.m. and 8:30 a.m. local time, according to Chavalit, a local police captain. Those two blasts were located about 650 feet (200 meters) apart from each other.

A female municipal worker was killed and four were injured in that incident, Chanmornoi said.

Around 9 a.m. on Friday in Phuket, two bombs went off, one at Patong Beach and one at Bang La Street -- both popular tourist sites -- according to Major General Theerapol Thipcharoen, the chief of Phuket Provincial Police.

Back in Hua Hin at 9:05 a.m, another two bombs went off near a clock tower, a city landmark, according to Yoosumran.

"Police have tightened security," he said. "We have set up check points and inspecting bags and other things."

Hua Hin is a popular coastal resort, about 90 miles (145 kilometers) southwest of the Thai capital, Bangkok. The city is home to many international hotel chains, including the Marriott, Hilton and Hyatt.

It's also home to the Klai Kangwon Palace, the seaside residence of Thailand's King Bhumibol Adulyadej.

The palace is located less than a mile (about 2 kilometers) from the bombing site.

The island of Phuket is one of Thailand's most popular destination for foreign tourists. Patong beach is lined with cafes and bars, while nearby Bang La Road is known as one of Thaliand's more raucous nightlife hotspots.

KABUL, June 3: A series of blasts in Kabul on Saturday killed at least 19 people at a funeral for one... Read More...

LUCKNOW, India, Aug 22: Officials say at least 40 people have died and hundreds of thousands have been evacuated as... Read More...