‘Assimilations,’ ‘Chasing Hope’ and ‘my friend i lost to imagination’ on display at SAG 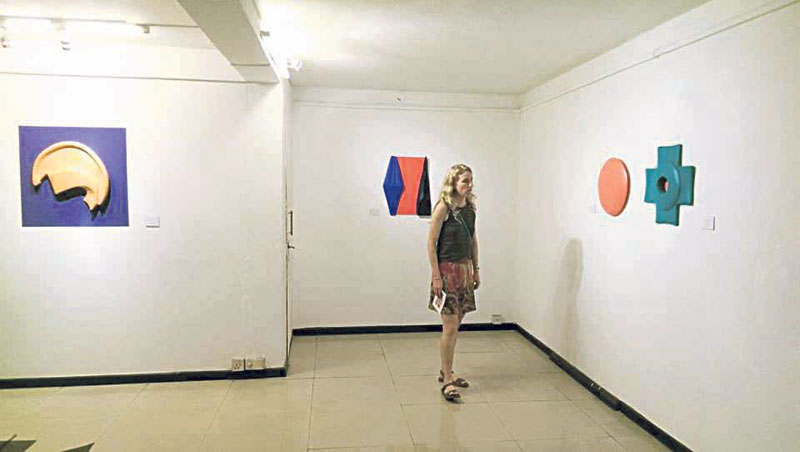 Brenna’s ‘Chasing Hopes’ reflects her intimate experiences of the 2015 Earthquake and its aftermath. Her exhibits are divided in three series: ‘Daydreaming,’ ‘Remnants of Loss/ Imagining Hope,’ and ‘Mapping the Damage/ Imagining Hope.’

She has also put up another art work: ‘Mending (Hope/Futility), where she has used ‘her own hair to mend ‘cracked’ Nepali lokta paper as a way to depict her ambivalent feelings during her time working in various relief efforts in the weeks and months following the earthquake. Her exhibition has also been inspired by a Japanese art form called ‘Kintsugi.’

Another attraction of her collection is a piece, in which she has collected over 8000 rice grains and stuck them on a fabric, as a tribute to the victims of the quake.

Similarly, Shelley Warren’s ‘Assimilations’ is a display of Buddhism inspired sacred objects, symbols and iconography. “Fusing Buddhist iconography and Neo-Pop Art color in foam boards, I have used bright colors to make them look uplifting, positive and have a joyous feeling,” says Warren, who has been studying Buddhist philosophy, meditation and art in Kathmandu for the past forty years.

‘my friends i lost to imagination’ by Karan Shrestha showcases 21 of his collections dating from 2012 to 2015. According to Shrestha, all of these exquisite paintings are his ‘dreams and visions’ put down in pages.

In each of his paintings he has only used black ink. When asked about his stylistic choice, he says, “I really don’t know! I feel comfortable with black. Besides, other colors would be too distracting.”

The exhibition will continue till July 15. The paintings and artworks are also on sale.

Souls of My City: My real hero

“When I was a little kid, I used to ask my mother: everybody has a dad…is there my dad too?... Read More...

WHO IS MY TRUE FRIEND?

You are whom I have witnessed. You are you, a hope, an insight, a person, who is close and handy... Read More...