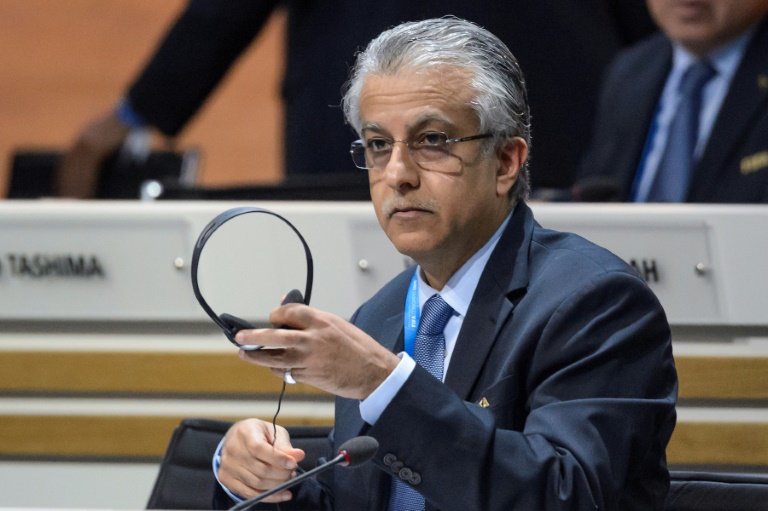 The Bahraini royal, who was standing unopposed for the second straight occasion, was elected in his absence at the Asian Football Confederation Congress in Kuala Lumpur, which he skipped following the death of his mother on Wednesday.

Sheikh Salman was criticised by rights groups this year for his silence over the case of Bahraini refugee footballer Hakeem al-Araibi, who was detained in Thailand and threatened with extradition to Bahrain.

Araibi, who was released following an international outcry, believes he was targeted for claiming Sheikh Salman was involved in a crackdown on anti-government protests in 2011 which included the arrest and alleged torture of footballers.

The former Bahrain FA chief has long refuted the accusation, which was aired when he first came to power at the AFC in a landslide election in 2013.

Minky Worden, director of global initiatives at Human Rights Watch, said "Asian football is in a crisis", accusing Sheikh Salman and others of failing to protect human rights.

"Sheikh Salman should commit to uphold and to carry out FIFA's 2017 Human Rights Policy, including in his home country," Worden wrote in a commentary responding to his re-election.

However, FIFA president Gianni Infantino said Asia was showing unity and "stability" by re-electing Sheikh Salman, who sent a statement expressing his "heartfelt apologies" for his absence.

The Bahraini pointed to a record commercial deal struck last year, and said it would not have been possible without good governance and reforms to AFC competitions.

Lurid allegations have dogged the Bahraini since he was first elected in 2013, replacing Qatari businessman Mohamed bin Hammam who was banned from football for life over corruption.

AFP / Lillian SUWANRUMPHAHakeem al-Araibi, a refugee footballer who was detained and under threat of extradition to Bahrain, claimed he was targeted for criticising Sheikh Salman.

At the time, he rejected claims of involvement in Bahrain's round-up of protesters following Arab Spring demonstrations in 2011, which included footballers and other athletes.

He also came under fire over accusations that the Olympic Council of Asia, headed by Kuwaiti powerbroker Sheikh Ahmad al-Fatah al-Sabah, had been lobbying voters on his behalf.

This year, Sheikh Salman was heavily criticised for not publicly weighing in on Araibi's behalf. The AFC said he stayed out of the matter to avoid accusations of a conflict of interest.

Sheikh Salman was also re-elected unopposed in 2015, but he looked set to face a challenge this time around when Qatar's Saoud al-Mohannadi and Mohammed Khalfan Al-Romaithi of UAE announced their candidacies.

However, Romaithi abruptly cancelled a lobbying tour and withdrew in late March -- about two weeks after launching his campaign -- and Mohannadi followed suit last week.

Mohannadi was among five delegates who won a seat on the powerful FIFA Council, while also retaining his position as an AFC vice-president.

Two arrested on charge of rape
11 minutes ago