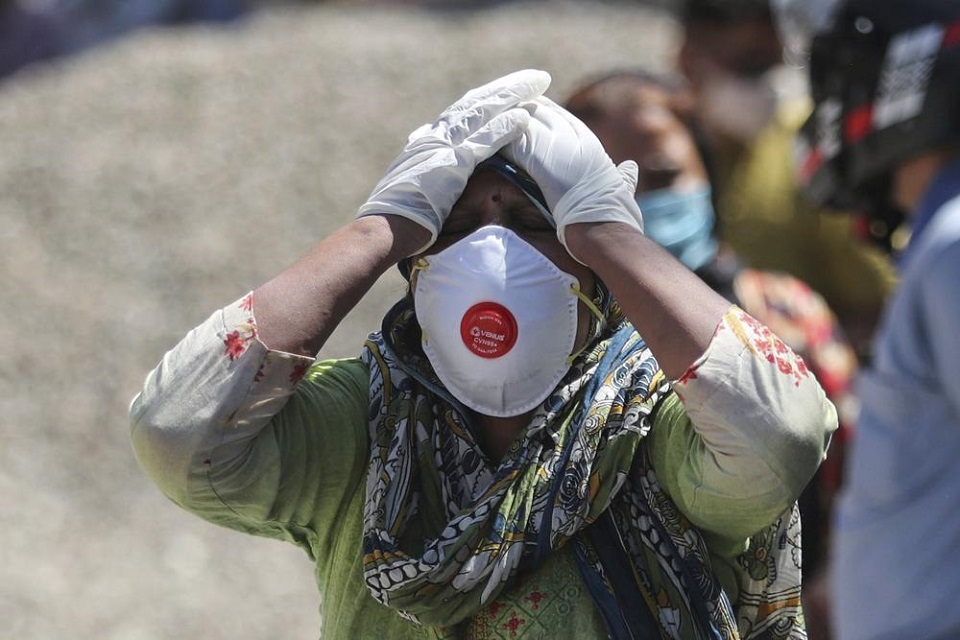 NEW DELHI, April 27: India recorded more than 320,000 new cases of coronavirus infection Tuesday as a grim surge of illness and death weighed on the country and its sinking health system started getting much-needed support from foreign nations.

Tuesday’s 323,144 new infections raised India’s total past 17.6 million, behind only the United States. It ended a five-day streak of recording the largest single-day increases in any country throughout the pandemic, but the decline likely reflects lower weekend testing rather than reduced spread of the virus.

The health ministry also reported another 2,771 deaths in the past 24 hours, with roughly 115 Indians succumbing to the disease every hour. The latest fatalities pushed India’s fatalities to 197,894, behind the U.S., Brazil and Mexico. Experts say even these figures are probably an undercount.

Other nations like the U.S., Germany, Israel and Pakistan have also promised medical aid. The countries have said they will supply oxygen, diagnostic tests, treatments, ventilators and protective gear to help India at the time of crisis, which World Health Organization’s chief Tedros Adhanom Ghebreyesus called “beyond heartbreaking.”

The surge, spurred by insidious variants of coronavirus, has undermined the Indian government’s premature claims of victory over the pandemic. The country of nearly 1.4 billion people is facing a chronic shortage of space on its intensive care wards. Hospitals are experiencing oxygen shortages and many people are being forced to turn to makeshift facilities for mass burials and cremations.

India’s top health official on Monday urged Indians to wear masks at home to prevent the spread of the virus. “It’s time people start wearing masks inside their homes as well,” said Dr. V.K. Paul, the head of a government committee on medical emergency preparedness.

India has also called on its armed forces to help. India’s chief of Defense Staff, General Bipin Rawat, said oxygen supplies would be released from armed forces reserves and its retired medical personnel would join health facilities to ease the pressure on doctors.

Meanwhile, in a bid to tackle the shortage of beds, Indian authorities are turning to train carriages, which have been converted into isolation wards. India has also started airlifting oxygen tankers to states in need. Special trains with oxygen supplies are also running in the country.

France was sending breathing machines, ICU gear and eight oxygen generators in a shipment expected to be sent later this week. Each generator can equip a hospital of 250 beds for several years, French President Emmanuel Macron’s office said.

France will also send breathing machines, pumps and containers of liquid medical oxygen aimed at helping up to 10,000 patients per day, according to the French Foreign Ministry. That first oxygen shipment is expected to arrive from Europe to India next week.

The White House was moving to share raw materials for the AstraZeneca vaccine by diverting some U.S. orders to the Serum Institute of India. White House COVID-19 coordinator Jeff Zients told The Associated Press the administration was working on other requests, namely for personal protective equipment, tests and oxygen supplies.

In other developments in the Asia-Pacific region:

— Japan will set up a large vaccination center in Tokyo and Osaka beginning in late May in a bid to speed up its snail-paced inoculation campaign so that at least the elderly people will finish their second shots by the end of July, officials said Tuesday. Chief Cabinet Secretary Katsunobu Kato told reporters a Tokyo vaccination center will be set up as early as May 24 to give shots for about three months. Details for the Osaka center are still being decided. Each will use the Moderna vaccine, whose approval by the health ministry is expected in May. Inoculations so far have covered only about 1% of Japanese people. Japan started its third state of emergency in Tokyo, Osaka and two neighboring areas Sunday to curb a rapid resurgence of the virus three months ahead of the Tokyo Olympics.

— Sri Lanka on Tuesday closed schools in the capital and suburbs for four days and made work-from-home plans for state workers to contain a growing outbreak. After weeks of reporting fewer than 300 new cases daily, Sri Lanka confirmed 997 during the past 24 hours. Most were in the Colombo district that includes the capital. Health officials have warned of an expected increase because people engaged in crowded celebrations and shopping during the traditional new year festival that fell on April 14. From Tuesday, half of state employees would be called to offices while the balance would work from home. Already, the government has imposed lockdowns on nearly a dozen of villages in different parts of the country.

— Philippine officials are assessing whether to extend a monthlong lockdown in the Manila region amid a grim spike in cases or relax it to fight a recession, joblessness and hunger. The country has recorded more than 1 million cases, including more than 16,800 deaths. A spike last month prompted President Rodrigo Duterte’s administration to reimpose a lockdown in the Manila region, where several hospitals reported being overwhelmed. Cabinet officials and medical experts are to meet Tuesday to recommend whether to continue the lockdown, and Duterte may announce the decision Wednesday.

— Australia will halt flights from India for two weeks due to its virus surge. Prime Minister Scott Morrison also announced Australia will give India 509 ventilators and 100 oxygen concentrators with tanks as well as personal protection equipment. Morrison said further aid would follow. Morrison announced last week plans to reduce the number of Australian citizens and permanent residents returning from India by 30%. But the number of travelers testing positive in Australian hotel quarantine jumped from 90 to 143 in a week, Morrison said.

Overall, Indonesia, the world’s fourth-most populous country, has reported more than 2.4 million infections and 64,631 fatalities from COVID-19. Those... Read More...