Ashram unable to utilize its lands since insurgency era 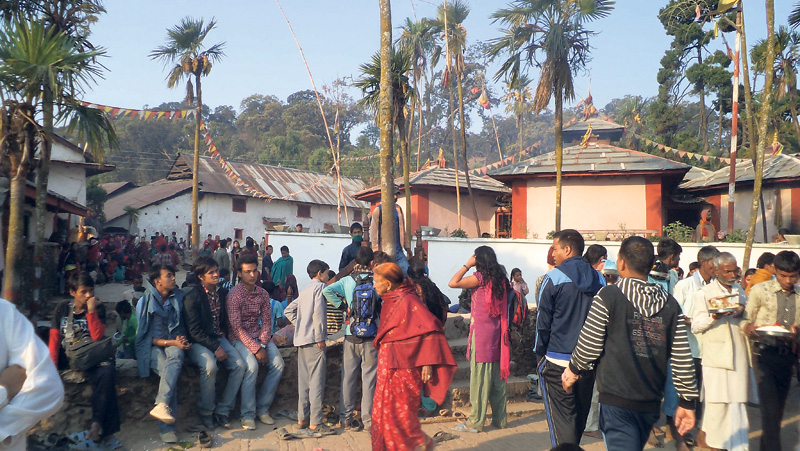 A long queue of devotees on the premises of Swargadwari Ashram. Photo: LB Thapa/Republica

PYUTHAN, Dec 10: The ashram of the famed Swargadwari Temple in Pyuthan district is struggling for proper management in lack of sufficient funds. The famous holy site located in the western region of the country has been thriving mainly on offerings made by pilgrims.

The temple's management committee said they are having difficulties on daily operation of the ashram which shelters the temple's priests and staff as they are unable to utilize its lands for generating revenue. It does not have a single regular source of income.

The ashram owns 1,012 bighas of farms in Dang district. However, it has not been able to utilize the farm lands since the Maoist rebellion as the rebels seized the farms during the conflict period, robbing the ashram of its main source of income.

“The famers who use the lands have stopped paying a share of the production to the ashram since a decade,” said Basu Bhattarai, accountant of the ashram. Therefore, the only source of income of the ashram is donation from pilgrims and various organizations.

It received about Rs 15 million in total from offerings and donations last year. Bhattarai said the entire amount collected from donations is not enough to meet the expenses of the ashram, which stands at Rs 300,000 per month. It spends on food, water, transportation, fuel, furniture, wages, communication, electricity, and medicines, among others.

It is estimated that the ashram receives about Rs 6 million in donations alone. However, the amount is not sufficient to pay even salaries of the staff which amounts to around Rs 8 million. It employs 141 staff, while 24 Bhramin priests are also paid on a regular basis, according to Bhattarai.

According to the ashram, about seven individuals have encroached on the lands owned by the ashram and have built their houses there. Local authorities have not taken any action against the encroachers to evict them.

Although the ashram has been operating mainly on the offerings of devotees, locals in the district have complained that the funds have not been utilized properly. They suspect of anomalies in managing the funds.

Giru Prasad Bhandari, chairman of Pyuthan chapter of Federation of Nepalese Journalists, stressed that the ashram management committee should properly managed donations and offerings of the devotees by forming Swargadwari Development Committee.

DANG, Feb 9: After the formation of new local units under the federal structure, the District Coordination Committee (DCC) of Dang... Read More...

DANG, Feb 6: After the formation of new local units under the federal structure, the District Coordination Committee (DCC) of Dang... Read More...

DANG, Feb 6: After the formation of new local units under the federal structure, the District Coordination Committee (DCC) of Dang... Read More...