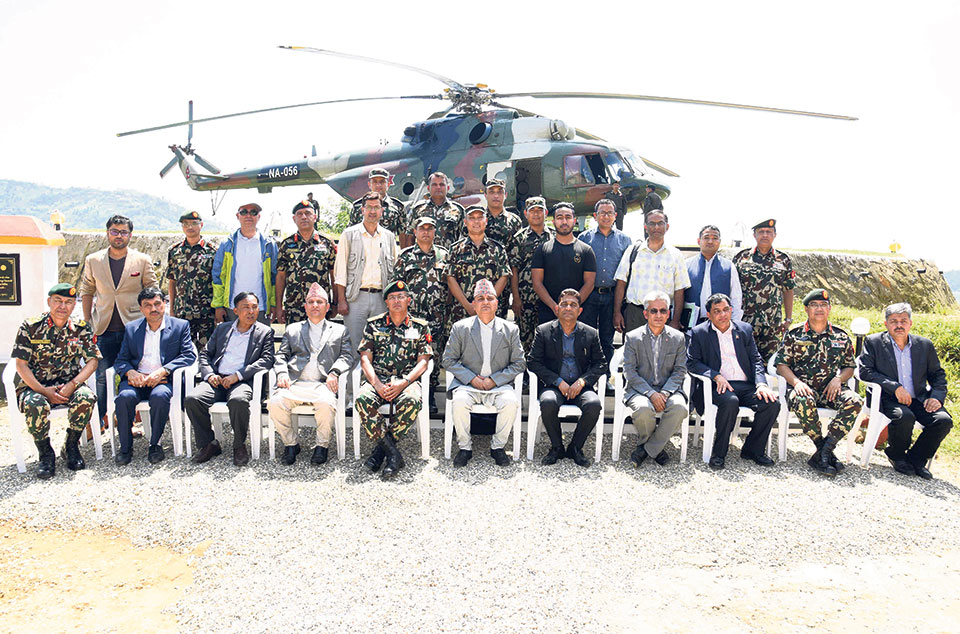 Defense minister Ishwar Pokharel (center), physical infrastructure minister Raghubir Mahaseth (sitting left to Pokharel) and officials pose for a photo with the Nepal Army’s MI 17 helicopter in the background at Lendanda during an inspection visit to the Kathmandu-Tarai Expressway site on Tuesday. Photo courtesy: Nepal Army

KATHMANDU, Sept 19: The Nepal Army has now proposed adding two new tunnels and also expanding the previously planned tunnel along the Kathmandu-Tarai Expressway citing fragile geology and the need to manage alignment so as to avoid overlap with the Kanti Rajpath.

The tweak in the project's design, which has yet to be finalized, will require additional investment of around Rs 5 billion and also makes the structure more complex. With the addition of the two tunnels, the total length of tunnel along the 76-km expressway will reach 6.3 km.

The tunnel's span was only 1.35 km (from Mahadevtar to Bhedre) as per the Asian Development Banks's feasibility study. The additional tunnels, whose length will total 4.72 kilometers, will add Rs 5 billion to the total cost, according to rough estimates by engineers. Normally a kilometer of the tunnel costs around Rs 1 billion. The Mahadevtar-Bhedre tunnel will be extended to 3.3 km, while two new tunnels -- Bhedre-Jitpur will be 1.37 km and the Lendanda tunnel will be 1.4 km, according to the army's proposal.

The longest tunnel span has been proposed at a place where the expressway has the same alignment as the Kanti Rajpath, 'so as not to cause any damage to the Kanti Rajpath'. The proposal was already tabled at the project's review meetings at the Ministry of Physical Infrastructure and Transport in August and also at the National Development Action Committee meeting headed by the Prime Minister KP Oli last week. “There are several other cheaper options to manage the alignments and avoid overlap, but they have proposed a very costly option. But we are surprised why are they exerting immense pressure on us to endorse the proposal,” informed the government engineer who declined to be named.

Minister for Defense Ishwar Pokhrel and Minister for Physical Infrastructure and Transport Raghubir Mahaseth and their secretaries and other high-level officials visited the project site in an MI 17 helicopter of the Nepal Army on Tuesday. A monitoring committee, formed a few months ago, led by the defense minister is the top authority to take policy decisions on the matter.

The purpose of the site visit organized by the NA was mainly to convince the political leadership to add the two additional tunnels, according to sources, but it is not yet known whether the officials became convinced. “Serious study is needed before deciding whether the additional tunnels are needed,” a source quoted Minister Mahaseth as saying during the visit to the project site.

According to a press statement issued by the NA, the visit was part of a periodic monitoring of the project. The team visiting the project site also included Bishnu Rimal, the chief political adviser to the prime minister.

Gokul Bhandari, NA spokesman, confirmed that the proposal to add two new tunnels was under discussion but has yet to be approved by the authorities concerned. Bhandari also defended the proposal saying they were absolutely needed.

NA was entrusted the work of building the mega project two years ago but it has been spending billions of rupees without even preparing a detailed project report. Critics say that the project is being developed ignoring international norms. NA spent Rs 8 billion in the project in the last fiscal year and for this fiscal year Rs 11 billion has been allocated for the project.

As the army was criticized for making haphazard spending in lack of civilian monitoring of the project, the government five months ago formed the monitoring committee led by the defense minister. NA has been criticized for purchasing heavy equipment and motor vehicles worth millions without following due procedures.

KATHMANDU, Sept 22: The decision to add new tunnels and expand already proposed tunnels was taken as per the advice... Read More...

KATHMANDU, Aug 26: Nepal Army (NA) has made a significant achievement in terms of clearing its arrears for the fiscal... Read More...

India provides Rs 1.54 billion to Nepal as a part of post-earthquake reconstruction assistance
18 hours ago