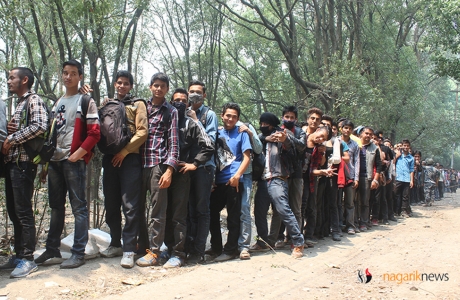 KATHMANDU, March 30: With two days to go before the deadline, the number of Korean job aspirants filling out the form under the Employment Permit System (EPS) has exceeded the number of applicants last year.

According to the EPS under the Department of Foreign Employment, Korea Section, as many as 64, 104 (64 thousands 1 hundred and four) applicants have filled out the forms online until Wednesday evening.

There are still two more days to go before the deadline for filling out the forms for KLT.

The application forms which were kept open on March 22 and will close on March 31, said branch officer at Korea Section Shobhakar Bhandari.

Those who have not received admit cards and those who have made mistakes in the name, date of birth and passport number have to contact the ESP, Korea Section from April 2 until April.