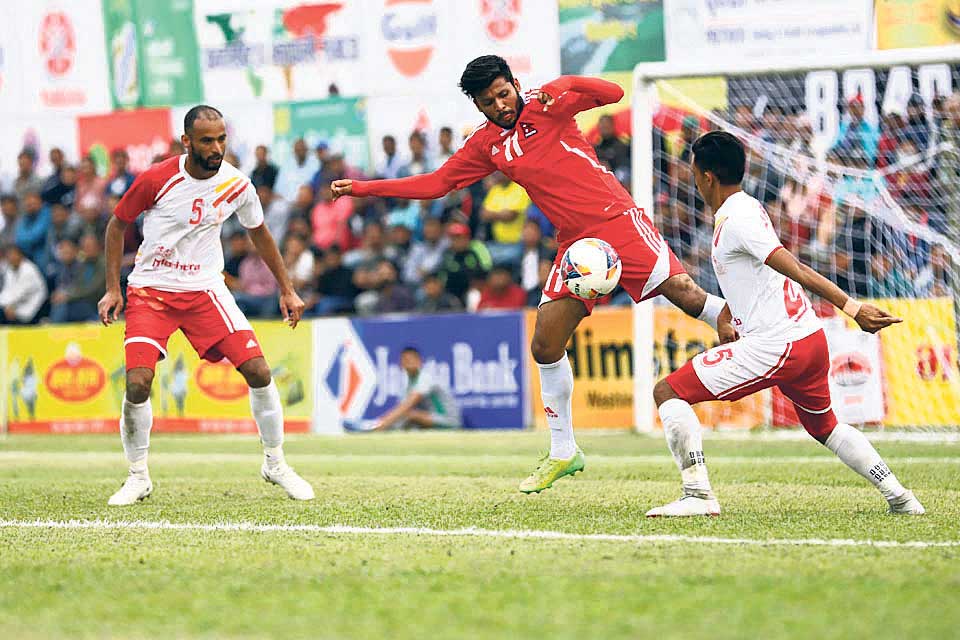 Players of Armed Police Force Club (white) and Morang XI Football Club in action during a match of the Jhapa Gold Cup football tournament at the Domalal Rajbanshi Stadium in Damak, Jhapa on Sunday. Photo: Republica

At the Domalal Rajbanshi Stadium in Damak, a goal nine minutes into the second half as a flick header from Hari Karki gave APF the win in its opening game of the tournament.

Karki scored a flick header after Ramesh Dangal gave him a headed pass when Morang goalkeeper Kishor Giri came forward to take charge of the ball in the 54th minute. The goal was enough to send the departmental team to the last eight.

Both the teams got other chances to score, but could not convert them. Morang hit a shot from inside the danger zone in the 66th minute, but was blocked by an APF player.

After the game, APF coach Ratna Kaji Maharjan said that the game had to be stopped as Morang breached the FIFA rules by playing players of other clubs. He added that the win was tough as the team had no time to rest after its last tournament.

Morang coach Sanjeev Budhathoki said that the team had to lose the game as APF pressurized them mentally and came up with the players’ conflict. He further added that the team combination was lacking, so it lost.

APF goalscorer Karki was named the man of the match and was rewarded with Rs 15,000.

Host Jhapa XI will take on Hong Kong’s Nepalese Academy for the other quarterfinal place on Monday.

About 20,000 observers to be deployed to monitor upcoming elections
54 minutes ago