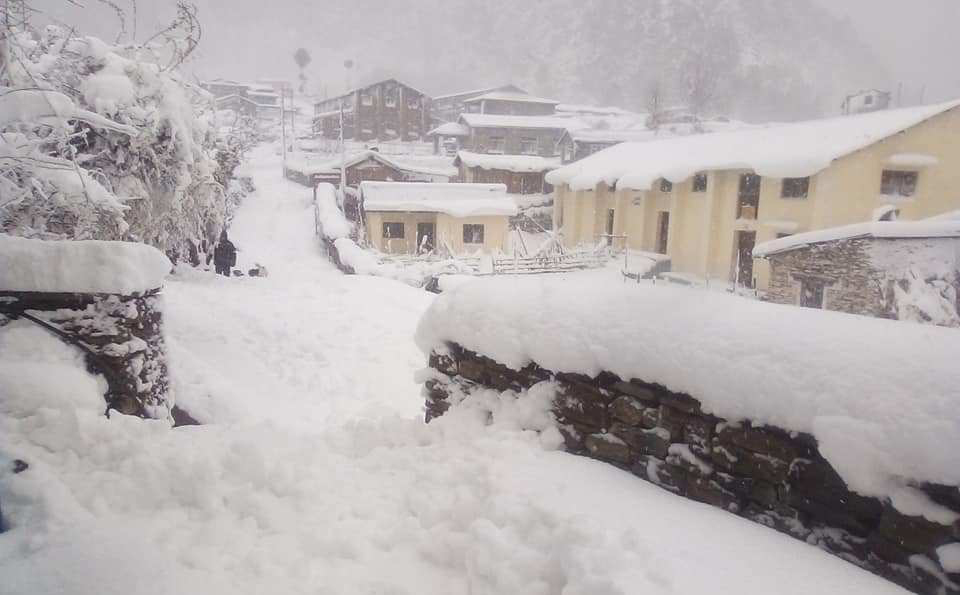 Photo: Republica Snowfall in Manang along the Annapurna trekking route. Trekking has remained halted for the past two weeks due to high snowfall.

POKHARA, Feb 17: The trails in Annapurna Circuit has been closed due to worsening weather conditions in the recent weeks. As a result, the tourists who had been trekking and hiking in the circuit have been called back by their travel agents.

According to Annapurna Conservation Area Project (ACAP), the trek route of Lamgunj – Manang – Thorang La has been closed off for travelers as the potential risk for the expedition is extremely high. “The heavy snowfall that the region has experienced has badly damaged the walking trails of the trekking circuit,” stated ACAP while deciding to close off the Thorang La Pass.

Babu Lal Tiruwa, section officer of ACAP, said: “The snow from the previous weeks has not melted and the added snowfall has further damaged the walking trails.” According to him, the tourists who have reached up to Upper Manang have been completely barred from traveling further north due to the hostile weather.

As the region is enduring the offseason, on average, there are around 10-12 travelers daily on average this year compared to 25-30 people taking on the trail last year. However, last year the region had experienced mild weather condition compared to this year.

Deputy Superintendent of Police Khadga Bahadur Khatri, the district police chief, said that the trail was closed for two weeks. He added that the trail had a slim chance of opening only if the region experiences sunny days for a week.

According to him, there are no trekkers in the route at the moment. Even a group of trekkers that had taken up the challenge has already returned as the trails were damaged from relentless snowfall. Furthermore, some regions of Manang have 5-7 feet of snow on the walking trails.

Likewise, Julal Gurung of Century Hotel said that they have been experiencing continuous snowfall for the past two weeks.

On the same note, Netra Sharma, chief of Chhomrang Checkpoint, said: “The number of tourists using the trekking route is minimal as compared to the recent years due to heavy snowfall.”

He added that the bright sunny days carries an increased risk of avalanche befalling on the travelers.

“This means that the circuit will be inaccessible to the travelers for some time now,” he added.