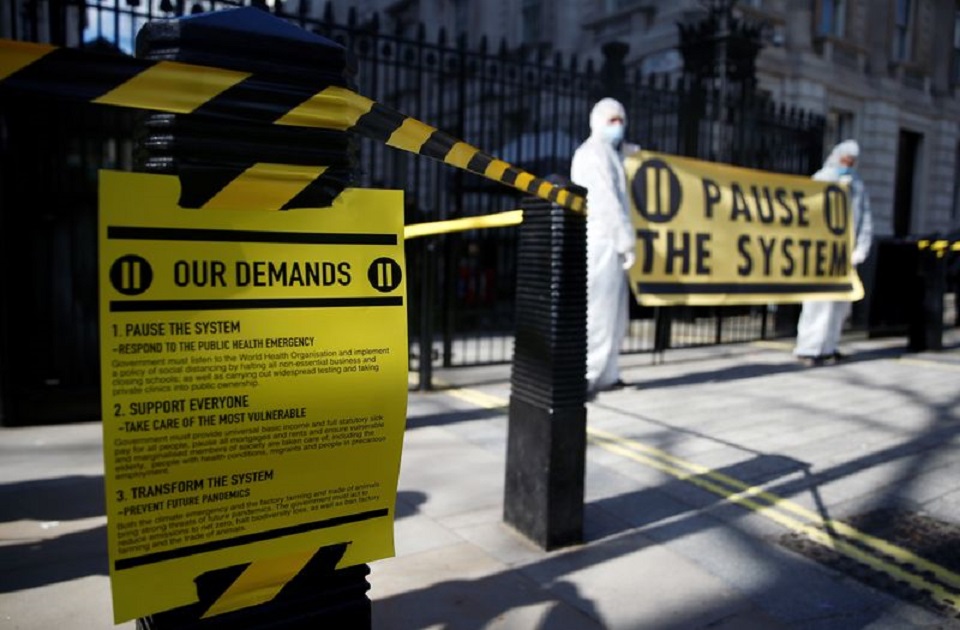 LONDON, March 16: British Prime Minister Boris Johnson faced a backlash on Monday over his decision to keep schools open, with angry parents keeping their children at home and complaining that other countries were doing more to stop the spread of coronavirus.

Britain has reported 1,372 confirmed cases of coronavirus and 35 deaths, fewer than in Italy, Spain and France, where schools have been shut, though the British numbers are expected to rise.

Johnson’s spokesman said the scientific advice was that school closures were not a step the government should be taking at this time, but a growing number of parents are refusing to send their children to school.

In Doncaster in northern England, Suzana Ilieva has kept her six-year-old son at home since Friday, out of fear that he could transmit the virus to an elderly relative who lives with her family.

“I think the government is irresponsible and for the sake of protecting the economy is damaging people’s lives,” she said. “I made my own decision with my husband.”

In Anglesey in north Wales, Helen Wright was at home with her 10-year-old son and had asked his school to send her a home education pack.

“I do not trust government guidelines or the government over their handling of the matter,” she said.

Several teachers who spoke to Reuters reported that a larger than usual number of children were absent on Monday. They did not wish to be quoted, saying that managers had asked staff not to talk to media.

The tags #Covid19Walkout and #CloseTheSchoolsNow were both trending on Twitter in Britain. Pupils were posting photos of densely packed school corridors and staircases, saying it was impossible to follow guidelines on social distancing.

“@BorisJohnson it’s time to act!” a user called Charlotte said in one of many tweets directed at the prime minister. “We need you to take action to SAVE LIVES! Why are we the only country not doing anything? This is so frustrating.”

On parliament’s website, a petition calling on the government to shut schools and colleges had attracted more than 590,000 signatures, and numbers were rising fast. Any petition on the website that gets more than 100,000 signatures must be considered for a parliamentary debate.

In Northern Ireland, a part of the United Kingdom that shares a land border with the Republic of Ireland, a mother whose daughter suffers from underlying health problems launched an emergency legal challenge against the government’s stance.

The education ministry said on Monday morning that the official guidance had not changed.

“Our advice to schools is to remain open unless otherwise advised by Public Health England,” a spokeswoman for the ministry said.

Some schools have already closed due to a member of staff or a pupil or a relative showing symptoms of the coronavirus, but the spokeswoman declined to say how many.

“It’s a dynamic situation. We’re not going to get into a numbers game. Some schools are opening, closing, opening again,” she said.

The education minister, Gavin Williamson, will meet school representatives later on Monday and information will be given to the public after that meeting, the spokeswoman said.

Some parents said pulling their children out of school was a difficult choice.

“I’m very much on the cusp, the key balance to strike being the likelihood that my kids could get and spread it (two of them are asthmatic) against the likelihood they could fall behind their peers educationally,” said father Gary Mark Fuller on Twitter.

LONDON, May 20:The United Kingdom’s COVID-19 death toll has reached nearly 43,000, underlining the country’s status as the worst-hit in... Read More...

LONDON, March 8: The number of confirmed cases of coronavirus in the United Kingdom has risen to 273, the Department... Read More...

Where to contact if someone needs Remdesivir?
4 hours ago
Sagarmatha sees first deaths of 2021 expedition
3 hours ago