An act of goodwill 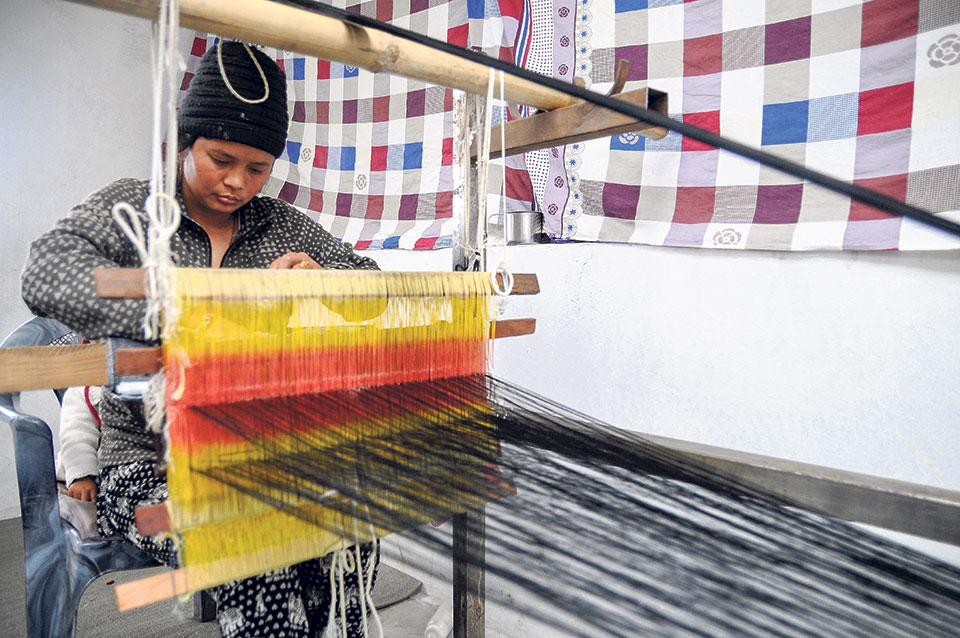 You wouldn’t start anything without meaning to make significant financial gains from it, would you? Why would you want to put in so much hard work and effort into something if you are not getting anything in return, right? But Sanam Sherpa, co-founder and marketing supervisor at Weaving for Empowerment, is doing just that. Even after running Weaving for Empowerment for more than a year now, she insists that she has not yet taken a rupee out of the profits. And she intends to keep it that way.

Launched with the aim of empowering women through creative ventures, Weaving for Empowerment was established in early 2016. And they do exactly what their name suggests – carry out the women empowerment agenda with hand-woven fabrics. Currently, five weavers work under Weaving for Empowerment, three of whom were originally trained by the organization The Small World.

Sherpa further explains the origins of the program, “Three women who hailed from the same district as I do – Solukhumbu – and had known me for a while had just been trained on weaving fabrics. They knew how to work but not how to earn from it and, when they mentioned this, I decided to put their work online to sell them.”

She adds that she did not really know how to run a business but still went along with it because she really wanted to help them in any way she could. Weaving for Empowerment recruited the other two weavers shortly after when the weavers arrived at their doorstep inquiring about the program and eager to join.

Bags are Weaving for Empowerment’s primary focus and they sell six different handmade designs (including a wallet one) made from hand-woven fabrics. Another thing they sell are scarves, which apparently does not need much designing on their part because the only work they put into it is weaving a pretty patterned Dhaka. But hand weaving meters long Dhaka fabric is quite a tedious task.

Weaving for Empowerment is also quite conscious of the way their production affects the environment. They do not use chemicals for anything and avoid any activity or product usage that hampers the environment. One thing they are still in search of is naturally or organically dyed threads.

Sherpa also emphasizes the importance and necessity of fair pay. She says there is a strict eight hours only working policy for all the workers at Weaving for Empowerment and stresses that we, as consumers, should also be conscious about fair trade and pay. “We have this tendency of buying cheaper stuff or bargaining. But what we fail to realize is that if we pay less for a product then that’s directly going to affect the earnings of its maker. They are going to be paid less than what their hard work amounts to,” she explains.

Sherpa mentions that Weaving for Empowerment has been doing pretty well commercially and that their business took off unexpectedly even before its six-month anniversary. But what surprised her was that they have more sales internationally than locally. She explains that quite a few Nepalis have pointed out that the price of their products is higher than the usual range and they do understand the reason behind it. Most people don’t buy anything saying the products are simply out of their budget.

But Weaving for Empowerment exports the goods to quite a few companies including ones in Colorado (USA) and Norway. The Local Project Nepal and De Craftmandu also display their products. And they also promote and sell their crafts through Instagram and Facebook.

Sherpa’s biggest challenge with Weaving for Empowerment is trying to give it time. For about three months each year she focuses on it but the rest of her year is spent on her day job at Global Dental Relief. But that also works to her advantage. “I don’t have to get commercial benefits from Weaving for Empowerment because I have a paying job but it is extremely hectic to work on both at the same time. I’m the one taking care of orders, shipping them, and I also handle most of the marketing aspects of the company and at times it gets very hard,” she confesses quickly adding she wouldn’t have it any other way.

BEIJING, Dec 24: The latest U.N. sanctions against North Korea are an act of war and tantamount to a complete... Read More...

Don’t like to limit myself as an actor, says Sunny Leone

Sunny Leone, whose latest song Laila main Laila is being appreciated, says she prefers not to put any limitations to her... Read More...