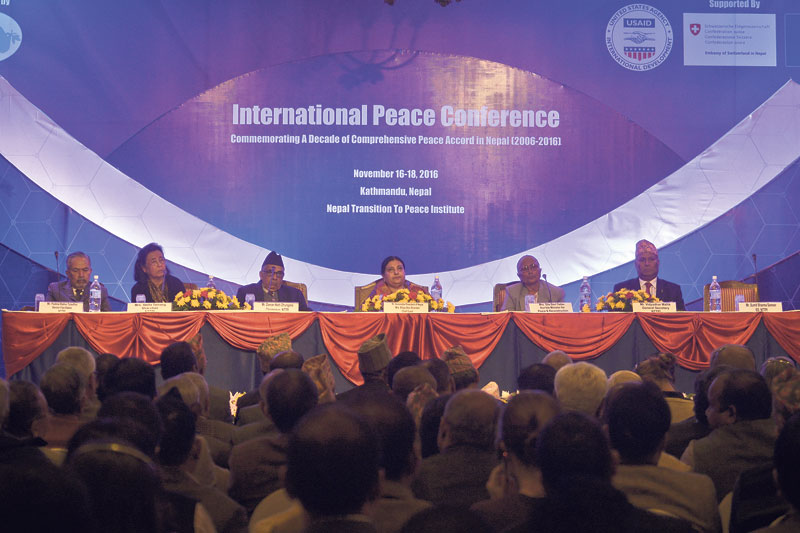 President Bidya Bhandari (center) and other dignitaries at the inaugural session of the International Peace Conference in Kathmandu on Wednesday. (Bijay Gajmer/ Republica)

KATHMANDU, Nov 16: Prime Minister Pushpa Kamal Dahal has said that the government is preparing to register an amendment proposal in parliament to address constitutional grievances of various agitating parties.

Addressing the International Peace Conference organized by Nepal Transition to Peace Institute (NTTPI) in the capital on Wednesday, Dahal asked the agitating parties to understand the limitations of the government, considering the party-wise composition of parliament. “It is not possible to meet all the demands immediately. I appeal to all the concerned parties to create an environment for addressing the demands, which can be addressed immediately,” he further said.

The prime minister also said that the government is trying to build national consensus on the constitution amendment proposal.

The international conference organized to commemorate the 10th anniversary of the Comprehensive Peace Accord (CPA), and to hold discussion on the challenges of peace building in Nepal was inaugurated by President Bidya Devi Bhandari. The conference also marked the launch of a book titled “Nepal Transition to Peace: A Decade of the Comprehensive Peace Accord 2006-2016” by Prime Minister Dahal.

Addressing the function, President Bhandari pointed out the need to hold periodic elections including local and provincial within the stipulated deadline of January 2018 through consensus among all political parties. She also urged political parties to work toward bringing social and economic transformation to the country through the implementation of new constitution.

Also addressing the function, Deputy Prime Minister and Home Minister Bimalendra Nidhi said the government is working to amend some weaknesses seen in the constitution in order to address the grievances of various agitating groups. He clarified that the government is preparing to register amendment proposal on four issues including demarcation of provinces, composition of national assembly, citizenship, and language commission.

Speaking on the occasion, Minister for Peace and Reconstruction Sita Devi Yadav said the peace process in Nepal has not completed as the wounds of the conflict victims have yet to heal. While adding that Truth and Reconciliation Commission and Commission of Investigation on the Enforced Disappeared Persons have just started work, she said that only 33 percent of the total infrastructures destroyed during the Maoist conflict have been rebuilt so far.

While CPN-UML Vice Chairman Bhim Rawal said his party would back any amendment proposal that is in line with the broader interests of the people and the nation, Chairman of

Tarai Madhesh Democratic Party Mahant Thakur complained that the government had failed to address their genuine demands. Thakur argued that current delineation of federal provinces fails to ensure “progressive state restructuring” and meet the aspirations of the Madhesi and other backward communities.

National Assembly row will be resolved in a few days: Dahal

KATHMANDU, Dec 25: CPN (Maoist Center) Chairman Pushpa Kamal Dahal has said that the present row over the formation of the... Read More...

BIRATNAGAR, Nov 11: Prime Minister Pushpa Kamal Dahal has said that the government was working out for the implementation of... Read More...