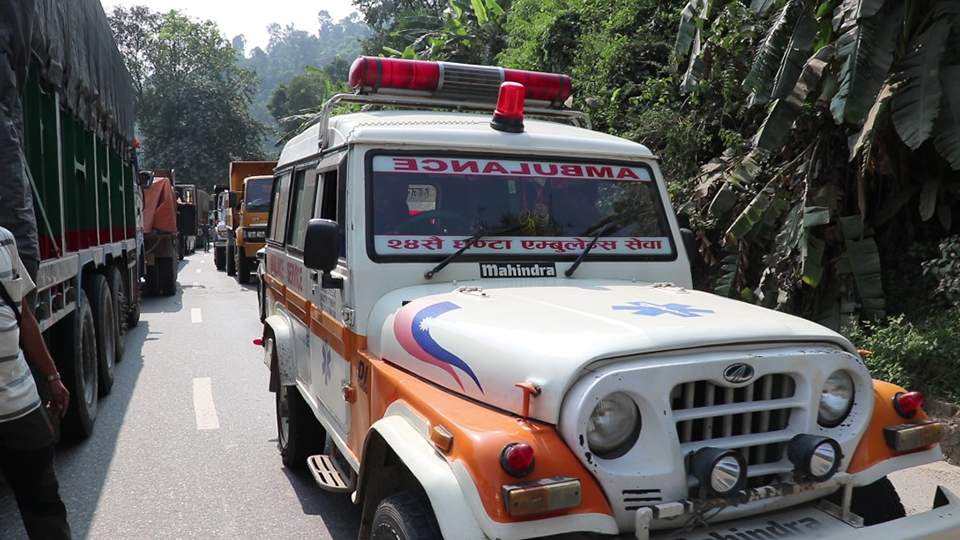 DHADING, Oct 4: Normally, it would only take around one-and-a-half to two hours to reach Kalanki of Kathmandu from Simle of Dhading. Of late, however, the travel time has significantly increased. It now takes at least eight to 12 hours to travel the same distance.

The heavy traffic snarls along the route even caused the death of a patient referred from Bharatpur Hospital of Chitwan to Kathmandu for further treatment. Rajani Chaudhary, 55, of Sauraha, got stuck in the traffic congestion and could not reach hospital on time. She died on Wednesday morning after being stuck in Naubise-Nagdhunga road section for hours.

The ambulance had crossed Prithivi Highway with great difficulty. It got stuck in Tribhuvan Highway at Dhanubesi Municipality for four hours, making it very difficult for the ill patient. Without immediate access to emergency medical attention, the patient died at around 10 am, according to police.

The general public has been facing severe traffic snarls on the road since the past week. It is attributed to the large number of passengers travelling home for the Dashain festival.

Nandi Thapa of Syangja said it took her nine hours to reach Dharke of Dhading from Kalaki. “I got stuck in traffic for at least seven hours, which is quite unbelievable. The heavy traffic made it very difficult to reach the destination.”

The traffic snarls is largely caused by the maintenance works along Thankot-Pipalmode road section, which is full of potholes. Additionally, the road is very narrow, dusty, and has lots of turnings. Authorities have closed the road from 8 pm to 5 am in the morning for repairing works.

Tension rises in Dhulikhel hospital after the death of a patient

BANEPA, March 2: Dhulikhel Hospital has courted controversy after the death of a patient who was admitted there for the treatment... Read More...

Hospital vandalized after death of patient

DHARAN, Feb 22: Locals and relatives of a patient vandalized the Bijayapur Hospital of Dharan after a man admitted for the... Read More...

Nepal feels like home to me: Afridi
19 hours ago