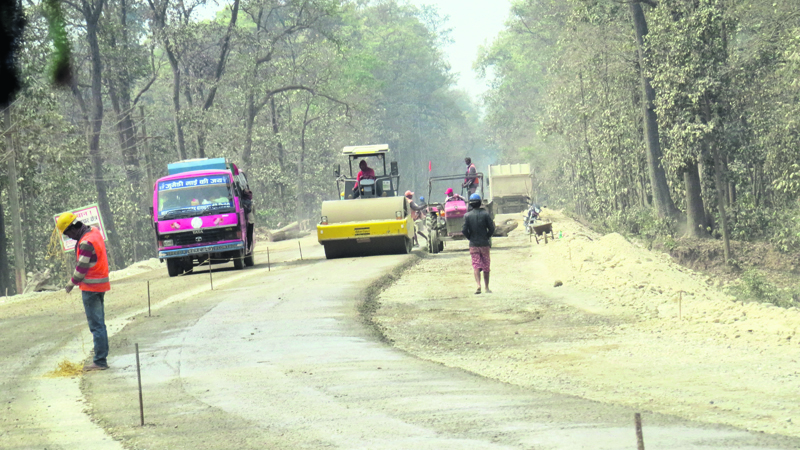 CHITWAN, Oct 5: Alternative to the Narayangadh-Mugling road section has been explored considering the growing traffic and the difficulties in course of the road widening.

Eight thousand to 10 thousand vehicles ply this road section on a daily basis. It is estimated that this number will reach around 15 thousand in the coming five years.

It is seen that the road being widened at present would not be able to accommodate the increasing traffic pressure after five years. For this reason, alternatives to this road section are being sought.

In this connection, the rural road linking Malekhu in Dhading district and Bhandara in Chitwan has been presented as the first choice as an alternative to the Narayangadh-Muglin road. However, this rural road needs to be widened and upgraded.

The second alternative is the proposed route from Mugling to Gaindakot of Nawalparasi via Devghat.

The consultant for preparing the detailed design of both the alternative roads has already been selected, the Asian Development Bank (ADB) project director at the Department of Roads, Keshav Kumar Sharma, said.

A Korean consultant has been selected for preparing the design of seven more roads and three bridges along with the two alternative routes. Sharma said an agreement to this effect would be signed next week.

The consultant has been asked to submit the report on the Malekhu-Bhandara road within a year and the report on other roads and bridges within one and half years. RSS

Risk areas to be identified for widening of Narayangadh-Mugling road

RATNANAGAR, April 5: Risk areas will be identified for the widening of Narayangadh-Muglin road that is in progress. ... Read More...

Nepali talents need to be identified and given opportunities: Whatmore

With all developing teams, there are areas which need improvement. There are always ways of improving and getting opportunity. There are... Read More...

CHITWAN, Sept 4: A landslide which struck between the Charkilo and Paanchkilo sections of Chandi Bhanjyang VDC – 6 on... Read More...