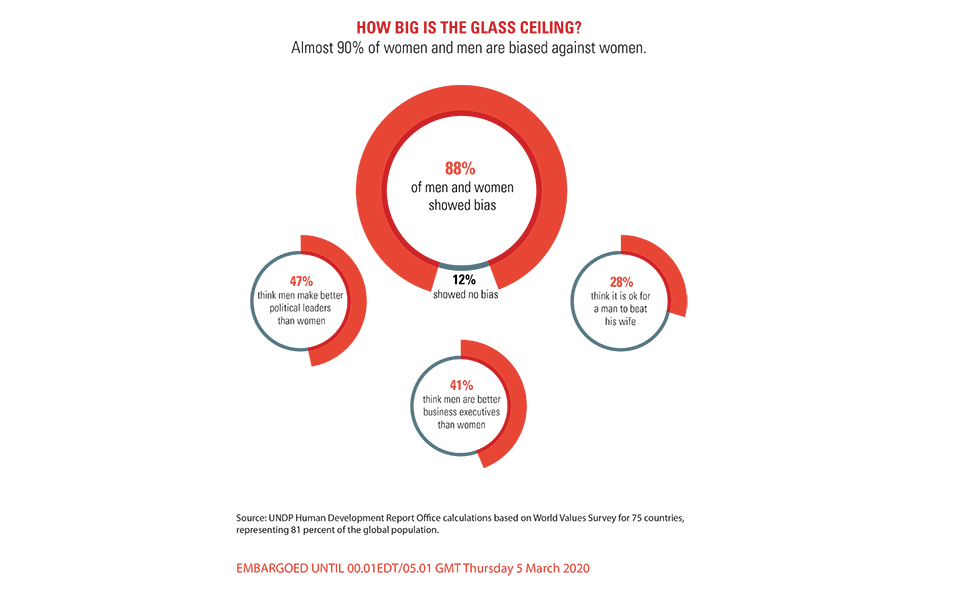 KATHMANDU, March 6: With a number of gender equality movements and initiatives including Beijing Declaration taken over the past several years, there is a popular belief that the ‘glass ceiling’ which exists against women is getting thinner and smaller.

But a first of its kind study commissioned by the United Nations in 75 countries shows that this has not witnessed any meaningful changes even as 25 years have passed since the Beijing Declaration took the most visionary agenda on women’s empowerment, exposing the global backlash toward gender equality.

Despite decades of progress closing the equality gap between men and women, close to 90 percent people hold some sort of bias against women, according to the new Gender Social Norms Index released globally by the UNDP on Thursday.

This index measures how social beliefs obstruct gender equality in areas like politics, work, and education, and contains data from 75 countries, covering over 80 percent of the world’s population. The new finding provides new clues to the invisible barriers women face in achieving equality, and a potential path forward to shattering the ‘glass ceiling’.

In addition to the gloomy picture of gender equality around the world, the Index also provides information on how bias is changing in around 30 of the total 75 countries under studies. It shows that while in some countries there have been improvements, in others, attitudes appear to have worsened in recent years, signaling that progress cannot be taken for granted.

“We have come a long way in recent decades to ensure that women have the same access to life’s basic needs as men. We have reached parity in primary school enrollment and reduced maternal mortality by 45 percent since the year 1990. But gender gaps are still all too obvious in other areas, particularly those that challenge power relations and are most influential in actually achieving true equality. Today, the fight about gender equality is a story of bias and prejudices,” a press statement issued by the UNDP quoted head of its Human Development Report Office, Pedro Conceição, as saying.

The new analysis also sheds light on why enormous “power gaps” still exist between men and women in our economies, our political systems, and our corporations despite real progress closing gender inequalities in basic areas of development like education and health; and the removal of legal barriers to political and economic participation.

For example, while men and women vote at similar rates, only 24 percent of parliamentary seats worldwide are held by women and there are only 10 female heads of government out of a possible 193. Women in the labor market are paid less than men and are much less likely to be in senior positions: less than six per cent of CEOs in S&P 500 companies-- a stock market index that tracks the stocks of 500 large-cap U.S. companies-- are women.  And while women work more hours than men, this work is more likely to be unpaid care work.

“The work that has been so effective in ensuring an end to gaps in health or education must now evolve to address something far more challenging: a deeply ingrained bias – among both men and women - against genuine equality. Current policies, while well-intentioned, can only take us so far,” the statement quoted Administrator of UNDP Achim Steiner as saying.

UNDP Gender Team Acting Director Raquel Lagunas said women’s rights demonstrations we’re seeing across the world today, energized by young feminists are signaling that new alternatives for a different world are needed. “We must act now to break through the barrier of bias and prejudices if we want to see progress at the speed and scale needed to achieve gender equality and the vision laid out in the Beijing Declaration over two decades ago and the Sustainable Development Goals,” the statement quotes Lagunas as saying.

KATHMANDU, April 30: A campaign titled “Say No to All Male Panel” was launched in Kathmandu on Tuesday. ... Read More...