All should be taken on board for constitution implementation: NC president Deuba 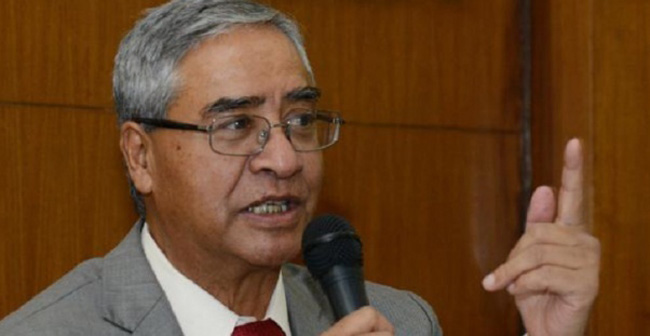 MELAMCHI, Feb 19: Nepali Congress president Sher Bahadur Deuba has said that voices of mountainous, hilly and Tarai should be accommodated on the issue of constitution implementation.

Blaming some opposition parties of making attempts to invite conflict by bringing division in the country, NC President Deuba warned that NC would launch agitation against such activities.

Addressing a mass gathering organized by NC Sindhupalchowk Constituency-1 at Khadichour on Saturday, he said that it was necessary to hold election of three-tiers by January 2018 after forging consensus with all parties.

Also former Prime Minister, Deuba expressed commitment said the NC would open the Tatopani check point, closed after the Gorkha earthquake, at any cost. He also claimed that NC would stand in first position in upcoming election.

Similarly, Minister for Physical Planning and Transport, Ramesh Lekhak said that people from all three areas—mountainous, hilly and Tarai should be looked equally.
Minister Lekhak said that the country has been bearing revenue of billion of rupees due to closure of Tatopani check point.

KATHMANDU, Dec 10: Nepali Congress (NC) President Sher Bahadur Deuba has stated that the objective of the registration of the... Read More...

Remembering Osho on his Mahaparinirvana Day
8 hours ago

Fresh mandate a must for peace, stability and development: Prez Bhandari
23 hours ago

Himalaya Airlines carries out test flight to Lhasa
5 hours ago

Remembering Osho on his Mahaparinirvana Day
8 hours ago

Schools in Humla to reopen from Jan 28
9 hours ago