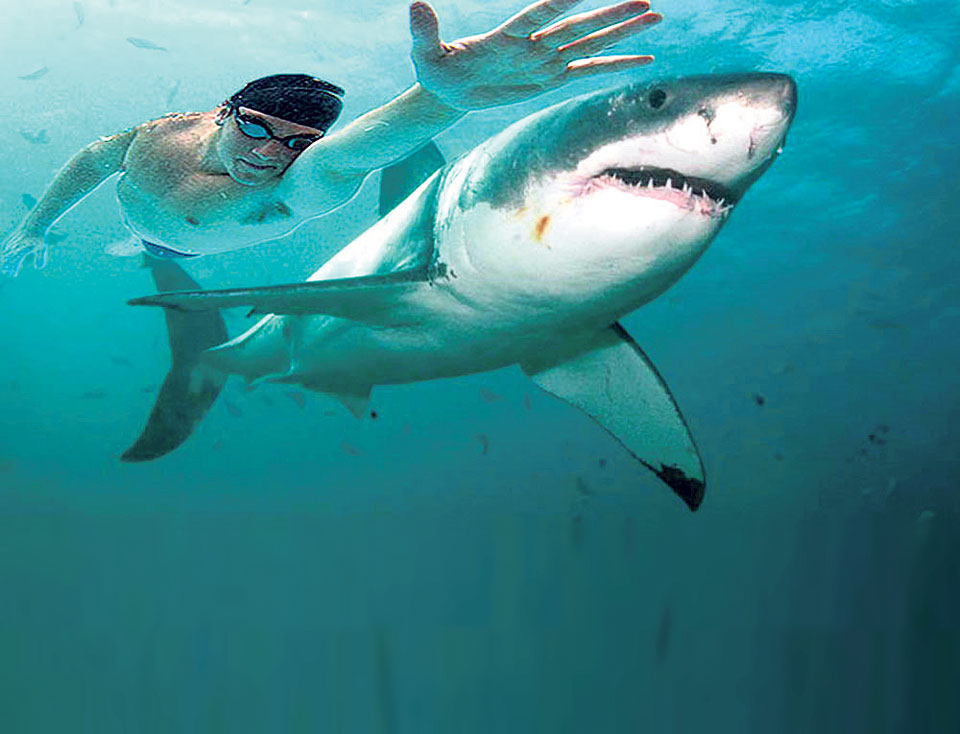 Here is a challenge. How many top women athletes of Nepal can you name immediately?

After the 2011 retirement of Guo Jingjing, the ever-graceful Chinese diver, I have been cheering for Katie Ledecty, the new American pool sensation. After winning four Gold medals in the 2016 Summer Olympics in Rio, Ledecty is now setting the Swimming World Championship in Hungary on fire. But even as she has been breaking records, Ledecty has been unable to take the attention of her countrymen away from Michael Phelps.

Phelps, the most decorated Olympian of all time, is not even taking part in the Budapest event. While most Americans have ignored Ledecty’s amazing feats, they happily tuned into Discovery Channel to watch Phelps race against a great white shark. It turned out that the shark was not even real but only a computer-generated image. Yet in TV ratings, the virtual race in South Africa beat the real race in Hungary, hands down. Don’t blame the Americans. Blame the universal bias for male athletes.

Here is a challenge. How many top women athletes of Nepal can you name immediately? Let me give it a try. Sangina Baidya. Gaurika Singh. Umm, I struggle for a third name. Now let me try to name a few male athletes. Paras Khadka. Sharad Vesawkar. Bimal Gharti Magar. Biraj Maharjan. Ganesh Thapa. Baikuntha Manandhar. Deepak Bista. I could perhaps give you at least 10 more names instantly. But why do I, a supposed fan of all sports, have this bias for male players?

I found myself asking this at the end of the scintillating women’s cricket world cup final between England and India last Sunday. In fact, it was the first time I had watched a women’s cricket match. Frankly, at first, even though it was a world cup final, the players seemed slow, their shots weak, the bowlers rather lame, and the fielders sluggish. But as the match wore on I got used to the pace and found myself more and more intrigued; in the end, it turned out to be a humdinger, with England barely squeaking to victory.

Given this wonderful experience, am I likely to watch women’s cricket matches in the future? Unlikely. First, since most viewers, including women, prefer to watch men play, sports channels skip most women’s matches—and not just in cricket. The women of Chelsea and Manchester City football clubs duke it out every season, just like their male counterparts, yet most of us will not even hear of these matches. They are not broadcast in Nepal. Even if they were, nobody would watch them.

But they certainly flocked to watch Aamir Khan-starrer Dangal, which broke all box office records in India (and even in China). It is a story about how a father nurtured his two daughters to be world-class wrestlers, the two women in the process breaking every imaginable gender stereotype. Yet real-life wrestlers Geeta Phogat and Babita Kumari that this film is based on were largely unknown to most Indians before the 2016 release of Dangal. India, incidentally, is also the country that worships Sachin Tendulkar as a demi-god.

Nepal has in recent times made great strides in gender equality. Our women have risen to become the country’s president, speaker, and chief justice. They are these days also better represented in almost all sectors. Yet, in sports, the field is as uneven as ever. Most of the money for sports development (as well as the big bucks from private sponsors) goes into men’s football and cricket. Women athletes have to make do with tiny leftovers. But this is not a big issue because in Nepal, as is the case in the rest of the world, sports are seen as exclusive male preserves.

It is said sports are unifiers, bridges between different cultures and societies, hallowed arenas that uphold the highest human virtues. But modern-day sports are anything but unifying, virtuous endeavours. They are openly sexist, with a clear male bias. They are unequal, as the countries and the clubs that can spend the most invariable get the best results. Nor are they fair, with athletes coming up all kinds of innovative ways to hide their use of performance-enhancing drugs.

Yes, even while watching women’s world cup final, I could not help compare the players to their male counterparts; it was almost as if I considered male cricketers the standard with which to compare cricketing women.

I may take a fancy to the likes of Guo and Ledecty, but my biggest sporting icon is, and will always be, the incomparable Roger Federer. I wouldn’t say Steffi Graf, would I?

Ying-Yang: Ancient Chinese knowledge on feminine and masculine (Part I)

DHANGADHI, May 25: The number of female voters in the second-round of local-level election on coming June 14 is more... Read More...