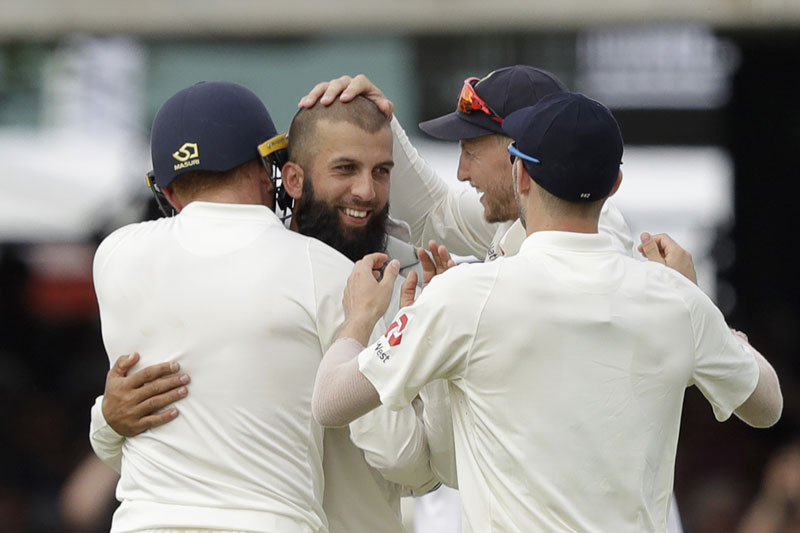 LONDON, July 10: The architect behind England's dismantling of South Africa, Moeen Ali doffed his cap and waved it to the spectators at Lord's as he led his victorious team back to the famous pavilion at the home of cricket.

A spot on the honors board awaits English cricket's unassuming star after his career-best figures of 10-112 that illuminated England's 211-run win in the first test on Sunday.

"A bit embarrassing," Ali said, sheepishly, "but to do that, especially at Lord's, was a great feeling."

On a day when 19 wickets fell, the South Africans gave themselves an outside chance of winning the test by dismissing England for 233 and setting a victory target of 331 with plenty of time left. It would have been the second highest successful run chase ever at Lord's.

They didn't get close.

Ali took advantage of a dry and dying pitch to take 6-53 as South Africa collapsed to 119 all out and a loss with more than a day to spare.

Dean Elgar, the Proteas' stand-in captain, called it a "capitulation."

"I do think in test cricket, particularly, you have to make your own luck," Elgar said. "We haven't been kind to ourselves the last four days."

South Africa will look back on England captain Joe Root's 190 in the first innings, and the fact he was dropped on 16 and stumped off a no-ball. On Sunday, Vernon Philander dropped Jonny Bairstow on 7 and he went on to make 51 to push England's lead over 300, a "psychological kind of figure" according to Elgar.

England beat South Africa at Lord's for the first time since 1960 and didn't have to play particularly well to achieve it.

Still, Root celebrated a great start to his tenure as captain.

"Everything I asked of the lads, they did," Root said. "It was nice to get the runs and a monkey off the back."

The second test starts on Friday at Trent Bridge, when the Proteas will have regular captain Faf du Plessis back but will be without suspended fast bowler Kagiso Rabada. Du Plessis suggested JP Duminy might be dropped.

"I thought it was game on, to be honest," Elgar said.

Yet, the hosts added 51 valuable runs after lunch, Bairstow making the most of his reprieve and Mark Wood scoring 28.

In the reply, Ali, who hit 87 and took 4-59 in the first innings, started his spree by getting Elgar caught and bowled to leave the South Africans 12-2. They fell to 28-4, Ali taking a sharp catch to dismiss Duminy, before the spinner took a wicket in five straight overs.

Ali has been given the go-ahead by Root to bowl in an attacking way and he showed he is up to it.

"That's when he's at his best, when he is aggressive," Root said. "He gets great shape on the ball, puts a lot of revs on it and makes it very difficult for batters to line it up.

"Whenever you can get a spinner beating both sides of the bat, it's very difficult to play against. He was outstanding."

The end came after 36.4 overs when Morne Morkel skied a delivery from Liam Dawson and Keaton Jennings took a catch in the deep.

Dawson, a left-arm spinner, took 2-34, with him and Ali combining for 14 wickets overall in the test.