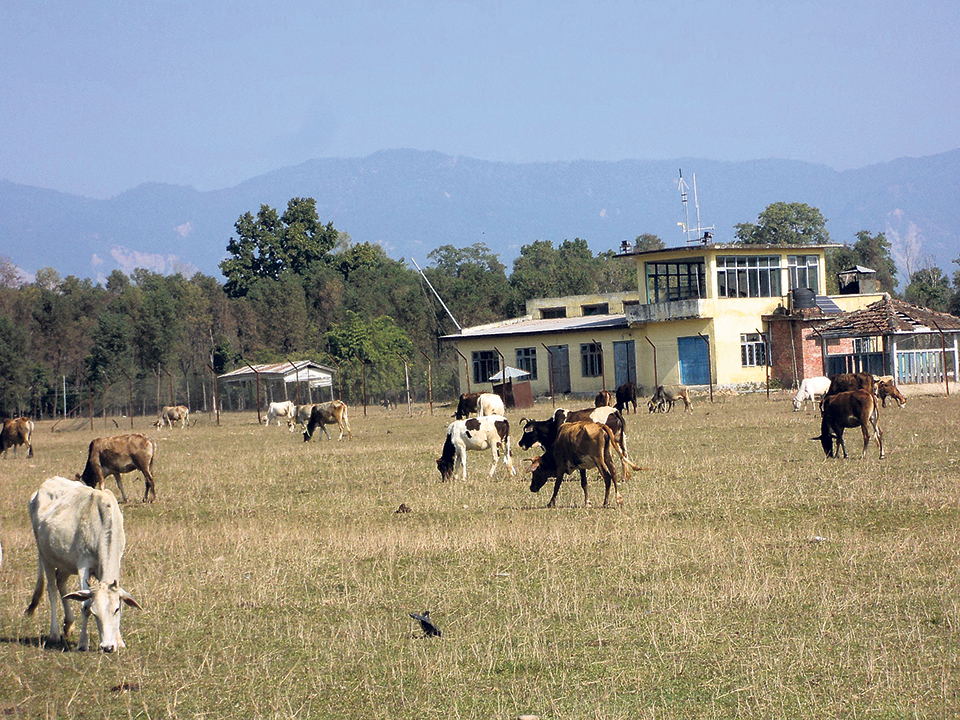 MAHENDRANAGAR, Sept 18: What can be found in an airport? The simple answer is aircraft. But the answer is incorrect for airports in the far-western part of the country. Instead of a place for aircraft, the airports have become grazing lands for animals and playgrounds for children for years.

Mahendranagar Airport is a fitting example. It has been 1.5 decades since an aircraft landed in the airport. The runway has turned into a grazing land for animals and playground for children. Neither has the service been resumed, nor has the airport been taken care of.

Besides Mahendranagar, the airports in Gokuleshwor of Darchula district, Patan of Baitadi district, Dipayal of Doti district, Chainpur of Bajhang district, and Sanfebagar of Achham district are not in operation for years. Only Geta Airport in Kailali district is operating regular air services in the far-west.

The air service was put in halt two decades ago because of lack of passengers as the expansion of road took place along with the construction of highway. The airports in Mahendranagar, Gokuleshwor of Darchula and Patan of Baitadi have remained shut since 1999, 1994 and 1985, respectively. Similarly, the airports in Doti and Achham have not been operating for long. The locals have been using road transportation to travel after the air service was put to halt. The passengers have been suffering every year as the roads are damaged due to landslides in the hilly districts.

Jung Bahadur Malla, president of Kanchanpur Chamber of Commerce and Industry, said that their repeated pleas for re-operation of the airports have been neglected. He said that the leaders belonging to that region of the country have not paid any attention to re-open the airports. "Considering the tourist destination of the far-west, the air service should be resumed even if it is for few days a week."

A tourism entrepreneur, Pramananda Bhandari, said that the access to touristic destinations like Kailash Mansarovar, Khaptad, Api, Nampa, Saipal, Byasrishi Himal, Badimalika, Shuklaphanta National Park, and the suspension bridge of Mahakali would be easier is the airports were brought into operation.

Bhandari who has started a cottage business focusing on tourists visiting the place said that the airway in comparison to roadway will make it easier for tourists to reach their destinations.

Locals have been drawing attention of the concerned authorities to resume the operation of the airports. Delegations from the districts have requested the concerned bodies. A member of the team, Rajendra Chand, said: "We have been putting our best efforts. We have received positive response."

Surendra Bista, mayor of Bheemdutt Municipality, said: "The government will deploy a technical team to bring the airport into operation by the next month, the minister expressed commitment for that. If the operation of the airport is assured, the municipality is ready to allocate more budget for the airport."

KATHMANDU, Feb 16: Mahendranagar Airport in Kanchanpur which has remained closed for long is to be re-opened. All three tiers... Read More...