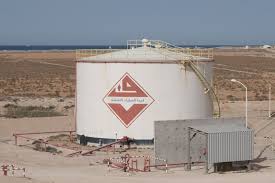 TRIPOLI, April 28: Air strikes hit the Libyan capital late on Saturday as eastern forces loyal to Khalifa Haftar pursued a three-week campaign to take Tripoli and also confirmed for the first time they had dispatched a warship to an oil port.

The Libyan National Army (LNA) force of Haftar, which is allied to a parallel government, has repeatedly flown air strikes since starting an offensive three weeks ago to take the capital held by the internationally recognized government.

The offensive has exacerbated chaos in Libya since the toppling of Muammar Gaddafi in 2011, threatens to disrupt oil supplies, boost migration across the Mediterranean to Europe and scupper U.N. plans for an election to end rivalries between rival administrations in east and west.

The Tripoli forces have pushed back the LNA on the ground in some southern suburbs in recent days. A suspected drone could be heard for almost one hour and half followed by at least eight loud explosions, witnesses said. Anti-aircraft fire could be heard.

Reuters was unable to establish with certainty whether an aircraft or drone was behind the strikes though residents reported a humming sound similar to unmanned aircraft.

Supporters of the Tripoli government had blamed a UAE drone for previous air strikes. The United Arab Emirates and Egypt have helped Haftar, a former Gaddafi general, in the past with air strikes when he was gradually taking control of the east.

Both countries have in past years provided the LNA with military equipment such as helicopters, even building an air base, previous U.N. reports have said, helping Haftar turn into a major player in Libya.

The air strikes came before the LNA had sent a warship to the eastern Ras Lanuf oil port, after days of unconfirmed rumors of a foreign navy ship having been sighted.

LNA spokesman Ahmed Mismari told reporters his forces had sent the Alkarama patrol vessel to Ras Lanuf in Libya’s key Oil Crescent region as part of a “training mission” to visit the operations room and to secure oil facilities.

The LNA last year had received the patrol vessel, which was previously owned by a firm with a postal address in the United Arab Emirates (UAE), according to U.N. report monitoring violations of an arms embargo on Libya.

A port engineer said the navy ship’s berthing had not affected oil exports which were going normally. It was not immediately clear whether the ship had left.

State oil firm NOC said several Libyan warships had used the oil port, while military personnel had also entered the nearby Es Sider terminal, located in the east of the OPEC producer in trouble since the toppling of Muammar Gaddafi in 2011.

It did not say who was responsible for this but the two terminals, Libya’s biggest oil export ports, are controlled by the LNA.

The LNA controls eastern oil ports and the county’s oilfields but had technically left state firm NOC to run them as foreign buyers of oil only want to deal with NOC, which they have known for decades.

NOC is based in Tripoli and has sought to stay out of the conflict between the two governments, handling the oil and gas exports, Libya’s lifeline.

The export proceeds are given by NOC to the Tripoli central bank which mainly works with the Tripoli government but also pays some public servants in LNA-controlled eastern Libya.

Haftar is allied to a parallel administration which has set up its own state oil firm and repeatedly sought to take over oil exports from NOC Tripoli.

NOC condemned in a statement the use of its facilities for military purposes without mentioning the LNA or naming who was behind the acts.

“Incidents recorded by NOC include: The seizure of the Es Sider airstrip for military use, military personnel entering the port of Es Sider as well as attempts to requisition NOC tug boats, the berthing of warships in the Ras Lanuf terminal and its use by Libyan military vessels.”

The NOC also said revenues rose to more than $1.5 billion in March, up 20 percent from the previous month, but that fighting posed a serious threat to production.

“The latest outbreak of hostilities ... poses a serious threat to our operations, production and the national economy,” said NOC Chairman Mustafa Sanalla.

Separately, the Tripoli-based interior ministry said it had seized an Iranian ship “carrying a mysterious shipment” in Misrata, a western city allied to Tripoli forces.

TRIPOLI, July 2: While Libya’s oil lies at the heart of three months of fighting over Tripoli and years of... Read More...

Oil falls as non-OPEC yet to pledge concrete output steps