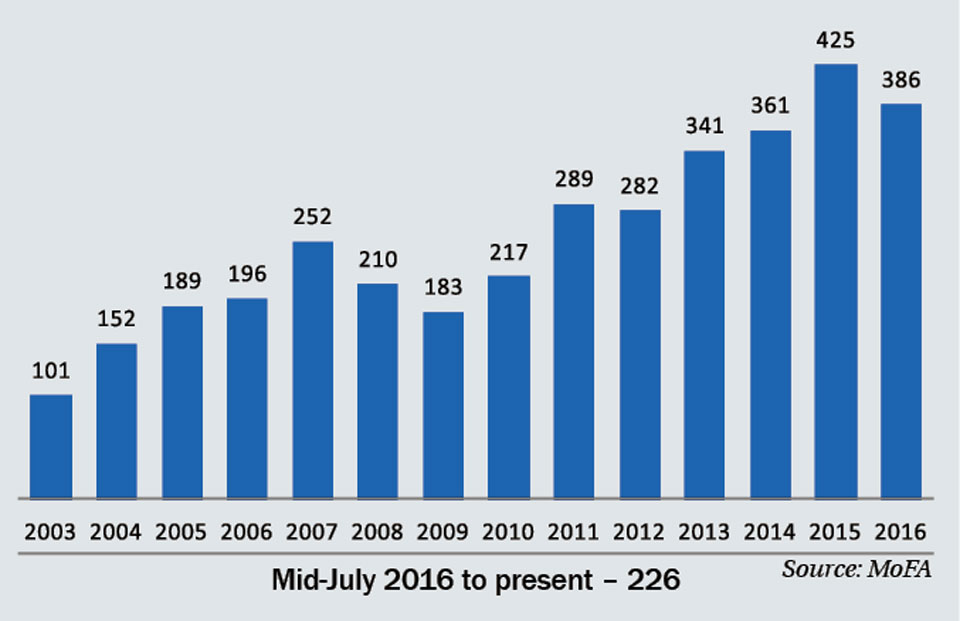 KATHMANDU, July 6: For Nepali migrant workers, Malaysia has nearly everything to make them feel at home. The climate in the Southeast Asian country is far more pleasant than the searing heat of the Gulf. Malaysians, whether native Malay or minority groups of Chinese and Indian origin, have familiar facial features, food habits and cultures. Like in Nepal, rice and curry are widely popular across Malaysia.

Yet, why are Nepalis  dying at a far higher rate in Malaysia than in the Gulf countries? This question  has troubled Nepali stakeholders for long. Fresh efforts now by the Ministry of Labour and Employment might take us closer to some answers.

A delegation of Nepali officials including medical doctors is currently in Kuala Lampur, the Malaysian capital, to study the deaths of Nepalis in Malaysia, the largest work destination country for Nepal’s migrant workforce with an estimated 550,000 Nepalis working there. The delegation, which comprises Dr Kedar Baral, registrar of Patan Academy of Health Sciences, Dr Raamesh Koirala, Sanad KC and Raju Pokharel of the Ministry of Health and Arjun Khanal of  the Ministry of Labour and Employment, is expected to come up with suggestions to bring the death rate down.

The rate at which Nepalis have been dying in Malaysia is shocking. Since 2003, at least 3,800 physically and mentally fit Nepalis have lost their lives while working in that country, according to data obtained by Republica from Nepal’s Ministry of Foreign Affairs and further verified with the embassy in Kuala Lampur.

The rate is far higher than recorded in any other of  the 110 countries identified as work destinations by the Nepal government, and almost double  than in Qatar.

An analysis of postmortem reports issued by Malaysian hospitals attributes most of the deaths to sudden cardiac arrest and heart attack. Sudden cardiac arrest, a medical condition wherein the heart suddenly and unexpectedly stops beating, is  mostly blamed for deaths that occur during sleep, according to officials at the Nepali mission.

The rest of the deaths have been attributed to other causes including workplace accident, road accident, suicide, physical assaults and chronic disease like tuberculosis, kidney failure and pneumonia.

But the reliability of the postmortem reports has always been debated among Nepali stakeholders and rights groups. As Malaysian employers are not obligated to pay compensation and insurance claims to the families of workers dying of causes other than road and workplace accident, this might be the reason why so many deaths are attributed to heart attack and cardiac arrest, say Nepali officials and experts.

Officials at the Ministry of Foreign Affairs said they hope the field study will find previously unknown facts related to migrant deaths.  One main objective of the study, they said, is to develop plans, policies and programs to reduce the number of deaths.

So far, the government has not done much to reduce migrant deaths except providing pre-departure orientation  that informs workers about the culture, climate and traffic rules in the destination countries.

Experts slam the government’s failure  to address the problems that workers face aboard. Rights organizations including Amnesty International and Human Rights Watch claim that a large number of Nepali workers are forced to work in hazardous conditions without  access to decent accommodation, healthcare, food and water.

KATHMANDU, July 19: Study Plus is organizing the tenth Malaysia Education Fair in Nepal with the support from the Embassy of... Read More...