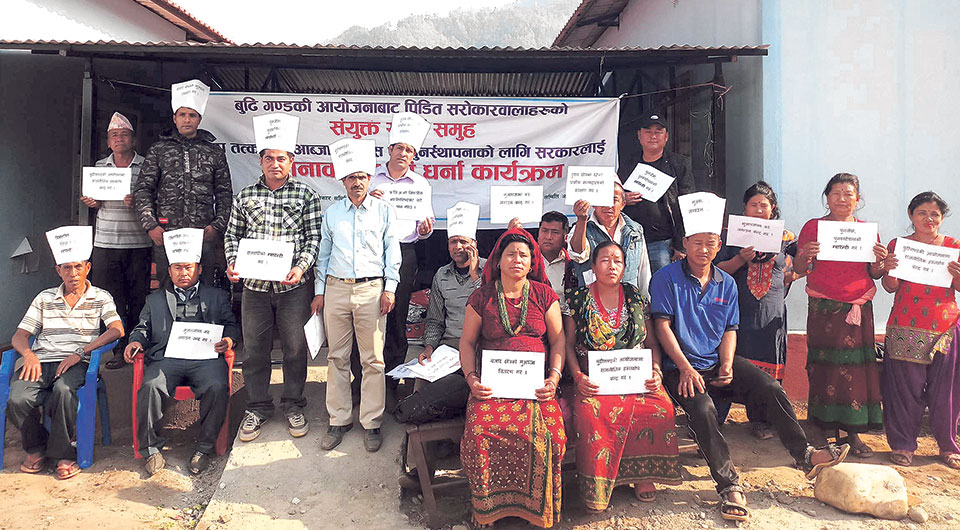 Project-affected locals protest against the Budhigandaki hydroelectric project in front of the project office.

GORKHA, March 8: Fed up by slow work progress and change in project development modality with the change in government, locals of Dhading and Gorkha districts affected by Budhigandaki Hydroelectric have started a sit-in at the project’s office located in Ghyalchowk, Siurenitar, of Gorkha.

“Unstable governments and their contradicting decision have affected implementation of the project,” said Navaraj Dhakal, leader of a struggle committee formed by the locals, said.

The struggle committee has concluded that irresponsible decisions taken by the compensation fixation committee and the project development committee during land acquisition process have seriously affected the project affected locals.

Members of the stakeholders say that they were saddened by the indifferent attitude of the government, concerned ministry, political parties, and local representatives toward their woes.
The sit-in will continue till Saturday, according to Manohar. He added that locals of three VDCs each of Gorkha and Dhading are participating in the sit-in.  Locals of project affected 13 VDCs of Dhading and 14 VDCs of Gorkha will participate in the protest.

Meanwhile, the project development committee has said that compensation has already been distributed in three VDCs of each district. “Process is underway to distribute compensation in three other VDCs each in both the district,” Project Chief Krishna Karki said. “Along with collection of application for compensation, we are also working on land verification.”

The process of distributing compensation was affected for some months due to confusion regarding budget, modality and the distribution process.

The government has not implemented development programs like building schools, irrigation and drinking water projects, roads, health posts and other facilities in the past few years, saying that the area will be submerged by the project reservoir.

The project development committee blocked transaction of land in affected area in 2015. A year later, it decided compensation for land to be acquired for the project. However, the process to distribute compensation is not gaining pace. Moreover, the locals are worried as they do not know who is going to build the project.

GORKHA, March 7: Fed up by slow work progress and change in project development modality with the change in government, locals... Read More...

BARA, Dec 5: A group of 60 youth, who had started a long walk to Kathmandu on Friday to pile pressure... Read More...

KATHMANDU, July 27: Locals of Budhigandaki Hydroelectric Project have demanded that the resettlement plan should be finalized before fixing compensation... Read More...