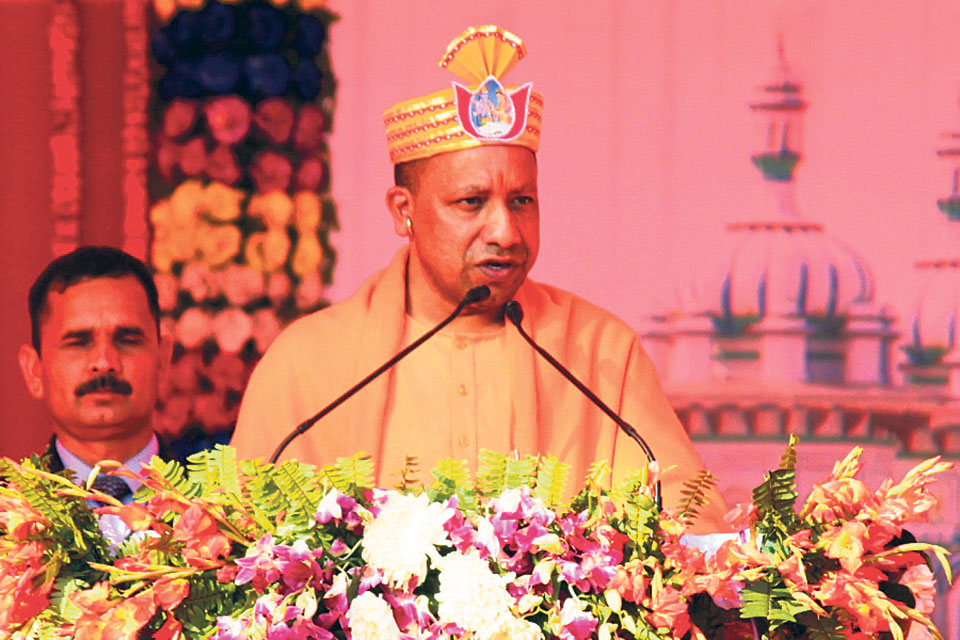 Yogi Adityanath, the chief minister of India's Uttar Pradesh state, addresses a Vivaha Panchami celebration function in Janakpur on Wednesday. He was on a day-long visit to Janakpur. Photo: Suresh Yadav/Republica

The annual festival has an important bilateral significance as Lord Ram of India's Ayodhya married Goddess Sita of Mithila, as described in the ancient Sanskrit epic Ramayana.

Adityanath arrived at Janakpur Airport at

10:40 am and headed straight to the Janaki Temple. He spent around 30 minutes offering prayers and worship.

He then headed to Madhes Bhawan and held a meeting with Province 2 Chief Minister Mohammad Lalbabu Raut and Governor Ratneshwar Lal Kayastha before attending a religious ceremony at Ranghabhumi Ground.

During the visit, Adityanath talked about the importance of the Buddhist Circuit and the Ramayana for the two countries. Likewise, he also stressed that bilateral cooperation between Nepal and India has sent a positive message for tourism development in both countries.

“The government of Uttar Pradesh has started construction of a four-lane road in order to shorten the distance between Janakpur and Ayodhya,” said Adityanath while addressing the Vivaha Panchami ceremony in Janakpur.

“This will make big contributions in the development of tourism and the economies of both countries. At the same time, it will also preserve our common culture and traditions dating back thousands of years,” he added.

Yogi also congratulated the residents of Province 2 over the newly- demarcated province under the country's federal model and assured that the government of Uttar Pradesh was ready to provide any type of help and support if the province asked for it.

While welcoming Yogi, Province 2 chief minister Raut said his government was committed to promoting Maithali culture and beautifying the century-old Janaki Temple that stands as a symbol of friendship between the two countries.

Adityanath returned to India at around 4 pm.