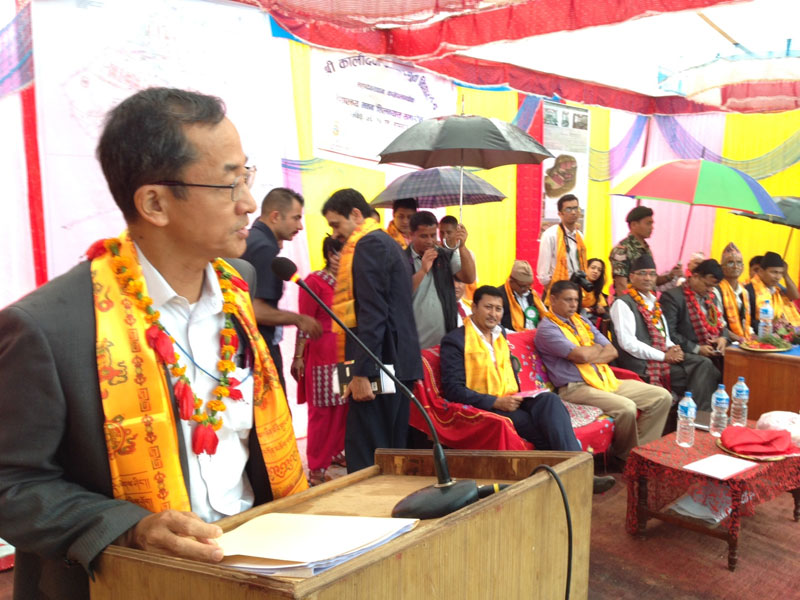 This marks the launch of the start of reconstruction of schools destroyed and damaged by the 2015 earthquakes in Nepal under the Earthquake Emergency Assistance Project (EEAP) jointly financed by ADB and the government.

The earthquake damaged 7,923 public schools in 31 districts, rendering over 33,131 classrooms useless and leaving another 14,297 partially destroyed.

Speaking at the launch, Poudel said the reconstruction of schools would provide an enabling environment in which students will be able to learn better with no fear in the back of their minds.

“The government is committed to rebuilding all the schools by 2018, as this is linked directly to the future of students and the country,” Poudel said.

“Under this project, the schools will be rebuilt to be earthquake-resilient should another similar tragedy occur. They will also have more learning space, furniture, and education material so education facilities are also improved,” Yokoyama.

The reconstruction of schools under the ADB project in eight of the 14 districts worst-hit by the tremors will increase school attendance which fell after the earthquakes.

The reconstruction of Shree Kali Devi Primary School is taking place under the $232 million EEAP to rebuild schools, strategic and district roads, and district government buildings. $200 million comes from ADB and $32 million from the government.

“We are prepared to provide more funds for school reconstruction once implementation gains momentum at the field level,” Yokoyama said.

Established 28 years ago, Shree Kali Devi Primary School was hit by the earthquakes that destroyed five classrooms and the toilet block. The school will be rebuilt by November 2017 at a cost of Rs 28 million.

The EEAP has already designed and completed the bidding documents for 34 other primary and secondary schools.

SINDHUPALCHOWK, June 20: Even the government authorities lack the exact details of the reconstruction of quake-damaged houses in Sindhupalchowk, the... Read More...