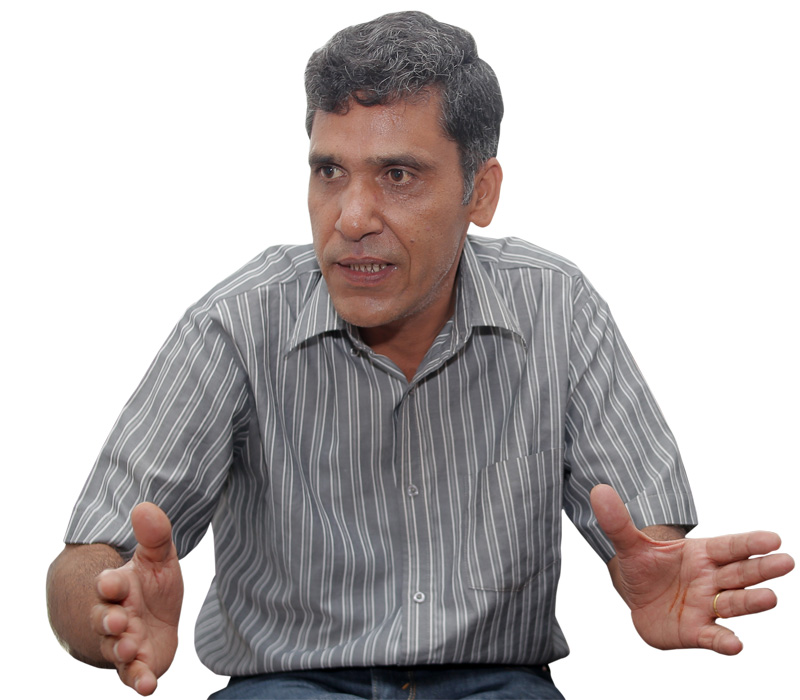 The National Climate Change Impact Survey (NCCIS) report released by the Central Bureau of Statistics (CBS) last week showed how climate change is badly affecting our agriculture, forests, biodiversity, water resources and energy security. Is the impact of climate change really that serious for Nepal? If so, what can we do to cope, as a country and as individuals? Laxmi Dutt Bhatta, a climate and ecosystem management expert with the International Center for Integrated Mountain Development (ICIMOD), shared his views with Republica’s Mahabir Paudyal and Kosh Raj Koirala.

To start with, how severe is the impact of climate change on Nepal?
We have to look into changes brought about by climate change holistically. Our research has found that climate in Nepal has been changing since the 1980s. The changes manifest most visibly in changing patterns of rainfall. We have noticed erratic rainfall in the past 30 years. You have a lot of rainfall in the dry season and little of it during the rainy season. This is happening not only in Nepal but across the Himalayas. The recent reports by CBS and our own studies support this.

Climate change has had visible impact on agriculture, biodiversity, forestry and availability of water resources. All this has changed our agriculture pattern, which is directly linked to food security.  Cumulatively, this has led to many disasters as well. Take the recent Mungling landslides. We have seen the rise of diseases, insects and invasive species that were not seen previously. These invasive species are changing our ecosystem. Our forests are not the same as they were in the past. The invasive species outnumber productive and useful plants. Our infrastructure development has added to the woe. We construct roads in hilly areas without proper survey and without taking into account disaster risk of those areas. This leads to soil erosion. You may not call it a direct result of climate change but climate has definitely accelerated this. They are interlinked.

What will be the situation in the next 20 or 30 years if climate change continues at this rate?
Experts have made projections about the availability of water resources for the next 20 or 30 years. Our findings suggest total amount of water may not change but pattern of rainfall will completely change. Monsoon will be more delayed after 30 years and our agriculture productivity will suffer. We will have to change our cropping cycle. More invasive species will appear in our forests. All this will impact agricultural productivity, biodiversity, crop production and our farming system, which in turn will hinder our efforts to ensure food security and development. Geological pattern of the Himalayas will change. But it could also have some positive impacts. For example, with the rise of the temperature in the Himalayas, agricultural activities will be possible even in higher elevations and more space will be available for agriculture. But this is not a happy prospect. This cannot be taken as a blessing in disguise.

Overall, how vulnerable is Nepal to climate change?
You can say we are one of the most vulnerable countries in this region as our country lies mostly within the fragile Himalayas. Vulnerability is measured in terms of ability to cope with climate induced disasters, poverty status, technicality of climate change, and forest and geography and biodiversity. If people are poor, they won’t be able to cope with climate change impacts. And if the country is poor it won’t be able to help its people cope with that impact. But there is no reason for alarm as well. For the last decade or so Nepal has been doing rather well in terms of adaptation. There have seen good intervention efforts by the government as well as by various non-governmental actors. In fact, Nepal is leading the adaptation process globally. Nepal was rated as the best country last year in one climate change negotiation. Ministry of Population and Environment was also awarded for this. Our efforts are much better compared to other countries in South Asia. We are ahead of India, for example.

It is often argued that small countries like Nepal are at the receiving end of climate change because of actions of industrialized countries.
There is a lot of global politics involved. But based on the Paris Agreement, I can say developed countries have committed to supporting developing and poor countries to combat climate change impact. It is up to developing countries like Nepal how to best utilize the grants and support pledged by developed countries. If the grants they provide do not meet our need, we should be able to say to them, ‘we don’t need your grants’. We need to be able to streamline their grants and support for adaptation and development. On climate change, you cannot draw a clear dividing line between the local and the global. Climate change is a cumulative effect of global and domestic activities.

US President Donald Trump has withdrawn American support for Paris Agreement. How will it affect adaptation initiatives in countries like Nepal?
We cannot say whether this decision is good for America and bad for rest of the world or vice versa. But as a country that led the climate change initiative, I believe the US won’t stay away from it for long. Yet I also don’t think the US disowning climate agreement will have huge effect in terms of funding because the US is only one stakeholder. China and European countries are also providing financial support.

What can Nepal do on its own to minimize the negative impacts of climate change?
Adaptation should be Nepal’s priority, not mitigation as we do not emit much carbon. Our consumption of fossil fuel is much lower compared to developed countries. We have already adopted National Adaptation Plan (NAP), which has identified eight key areas like agriculture, food security, forest and biodiversity, water resources and energy. We need to work to keep these areas immune from climate impact or find ways to adapt. It is crucial to work on those areas as our country’s development hinges on these factors. Second, we have to reach out to the communities on the ground. We have discussed climate change a lot from our comfort zones in Kathmandu.

We need to get to the ground to understand how climate change affects livelihood of the poor and vulnerable communities like Mushahars of Rautahat and Tamangs of Sindhupalchok and Dolakha; how they are suffering and coping with the challenges. Thus we should reach out to local communities. We have had actions plans, we have worked on policy and legal issues in Singha Durbar but still failed to reach out to the people who are suffering.  The CBS report says 49 percent of people are not aware about climate change.  This is because we have kept our efforts limited to Kathmandu. We have not been able to raise awareness on the ground.

We need to work with new local governments across the country. We need to take actions to revitalize availability of water resources at the grassroots. Now is the time for some action. We also need better coordination among institutions working on climate change and other governmental and nongovernmental bodies working on infrastructure development. In other words, we need a holistic approach.

How can common people contribute to protecting our environment from climate change?
In many ways. I would say all actions to minimize climate change impact need to start at local level. What we do at the local level contributes to accumulation of carbon in the atmosphere at the global level. Let me illustrate this with an example. Shifting cultivation was rampant in Nepal until recently. People would clear forest areas, let the felled trees dry and then burn them to cultivate on the area thus cleared. This process would go on and on. This is a dangerous practice because while burning you emit more carbon. Around 22 percent emission of green house gases is from agriculture and forestry residue. If we change our way of doing farming it will significantly reduce carbon in the atmosphere.

After we harvest paddy and corn, we burn the residues in the field, which again adds carbon in the air. If instead we let them rot on the ground, the soil would absorb carbon and it would get natural fertilizer. Likewise, we can avoid using and burning plastic bags.

We use more than one million plastic bags in Kathmandu, and more than 90 percent of them are burned. Now imagine 50,000 families in Kathmandu stopping the use of plastic bags, and its impact on the climate. These are simple, effortless and doable things that nonetheless will have huge impact in minimizing carbon emissions. Thus what we do at the local or individual level can have many positive impacts.

Along with the start of monsoon, we have been getting reports of landslides from around the country, causing death and destruction. What can be done to mitigate damage?
There are 22 or 24 districts that are highly vulnerable to landslides and soil erosion in Nepal—most of them in hilly areas. Hilly part of Dang, Dolakha and Myagdi are most vulnerable. The problem is that we do not take into account the findings of vulnerability studies before we plan vital infrastructures like roads. Or those who do research fail to convince planners and policy makers.

For example there has been enough research on geology and soil type of Munglin area. The findings of such research seem to have fallen on deaf ears of our development stakeholders.  Areas with sandy soil are more prone to landslide and erosion. We tend to think areas covered by forest are not vulnerable. But it does not work that way all the time. Some plants stabilize soil, others do not. We need to plant deep-rooted, not shallow-rooted, trees that stabilize the soil in landslide prone areas. Early warning system should be installed. We have been able to install such systems in flood-prone areas. We need to be able to do so for soil erosion and landslides as well.

The measures you suggest may take time. What can be done to save lives from landslides and floods immediately?
We have district level disaster management committee headed by the Chief District Officer (CDO) in each district. It is their job to find out which parts of the district are susceptible to floods and landslides. They need to go the people living in those areas and make them aware. They need to relocate them if necessary. In fact, they should have done so by April, before the arrival of monsoon. They could have used vegetation embankment, taken measures to stop siltation or used bamboo fence to destabilize flow in flood-prone rivers. Our problem is that we spring into action only when landslides ravage the hills or floods inundate Tarai villages. We discuss prevention measures only after lives are lost. We fail to execute even easy plans to save lives. The immediate responsibility of saving people’s lives falls on the district level disaster management committees.

MUSTANG, June 19: The existence of the mesmerizing Dumba lake located at Jomsom – 9 is in peril. ... Read More...