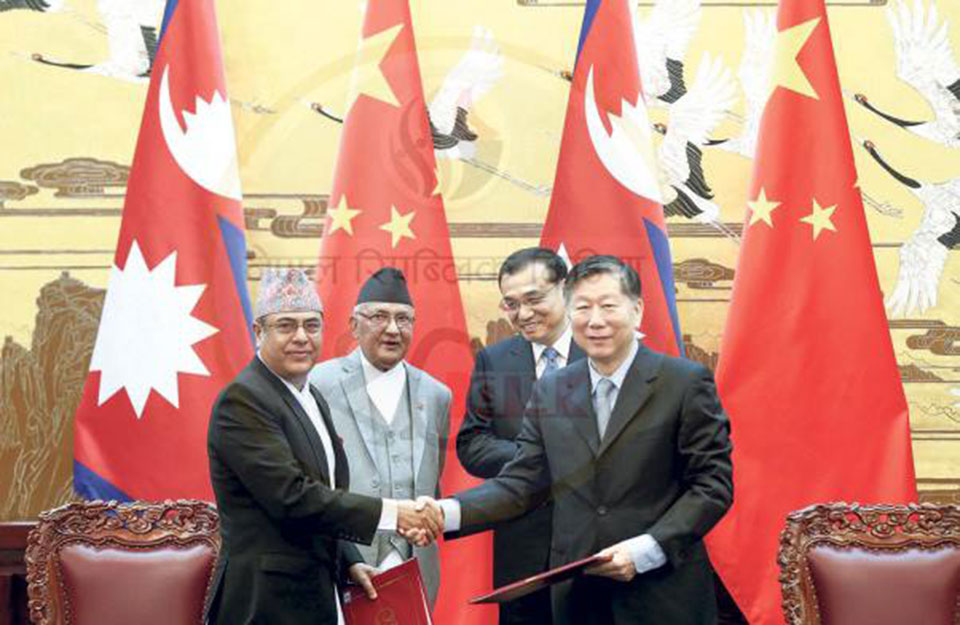 Nepal and China signed the agreement in March 2016. File Photo.

KATHMANDU, Sept 7:  Nepal will now be able to use all dry ports of China to ferry goods from China's border points, according to an agreement reached between government officials from Nepal and China.

The agreement is important as it provides an alternative for Nepal with India's transit points. Nepal will be able to use sea ports at Tianjin, Shenzhen, Lianyungang, Zhanjiang and dry ports including those in Lanzhou, Lhasa, Xigatse.

Rabi Shankar Sinju, joint secretary at the Ministry of Industry, Commerce and Supplies said that the agreement was important as it would help to reach new market areas. "With the agreement, we can now reach to North East Asian countries like Japan and Korea," he said as he said Nepal had required additional ports.

Sainju added that the agreement would help to connect to China's Belt-Road Initiative and provided that Nepal could cash in well, it could make profits.

However, he cautioned that much rested into setting up required infrastructures. "We have been working rigorously since the agreement was signed in March 2016," he said as he pinned hopes that Nepal could use the ports in a month or two's time, "probably before a high level visit from China that is being expected by Nepal."

A consultative meeting between the two countries had started yesterday. China has a 10-member delegation led by Director General of Department of Transport under the Transport Ministry while Nepal has 11 members in the delegation.

The Ministry further said the Nepali delegation has the representatives from various other ministries and department including Ministry of Foreign Affairs, Finance Ministry, Ministry of Physical Infrastructures and Transport, Ministry of Law, Justice and Parliamentary Affairs. The second consultative meeting was held in Beijing in June.

Total exports growing, except to China

KATHMANDU, June 23: Though the total exports of Nepal has been on a rising trend, albeit slowly, the case is... Read More...

Arniko Highway neglected after closure of trade route with China

SINDHUPALCHOWK, Sept 18: The Barhabise-Tatopani section of Arniko Highway, which once served as a major trade route of Nepal linking it... Read More...