Absence of league results in scarcity of players 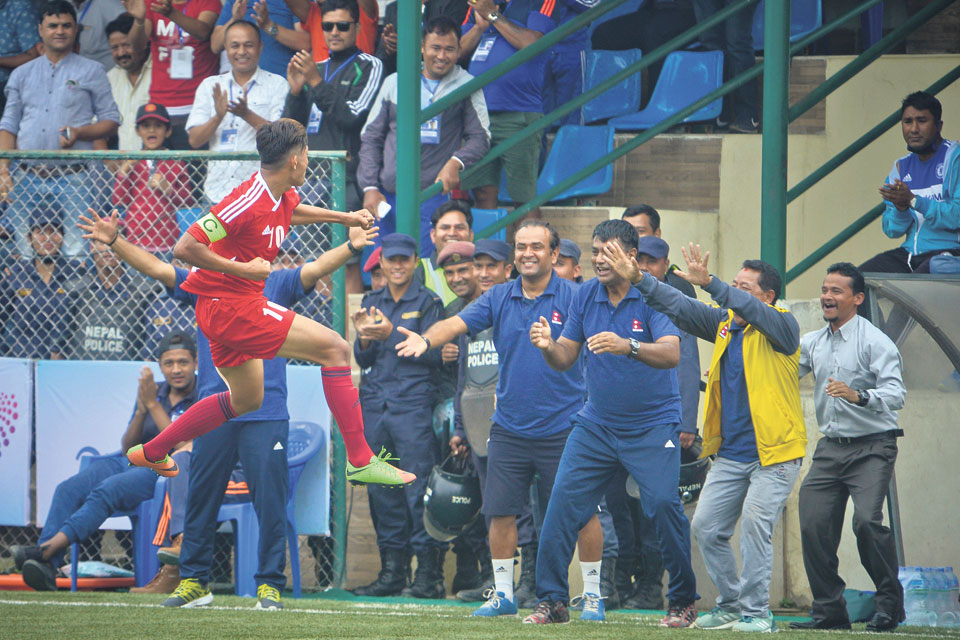 KATHMANDU, July 23: Nepal U-23 football team had traveled to the United Arab Emirates (UAE) in order to take part in the AFC U-23 Championship 2018 Qualifiers after a -month long training and a friendly against Bangladesh U-23 team.

Nepal's preparation for the continental age group tournament was limited to closed camp training at ANFA Complex and a friendly match against Bangladesh played at same venue just two days before its flight to the Gulf country.

With such a poor preparation, Nepali youth team under head coach Raju Kaji Shakya was going to face comparatively tougher opponents like UAE, Uzbekistan and Lebanon in Group D matches of the qualifiers at Tahnoun bin Mohammed Stadium, Al Ain.
Meanwhile, home team UAE, a quarterfinalist of the 2016 championship, had played series of friendly matches against strong teams including Bahrain and Saudi Arabia as part of its preparation for the qualifiers.

Likewise, Uzbekistan also came into the qualifiers with strong preparation having played with Kyrgyzstan and Qatar while Lebanon had played a friendly match against Bahrain.
Head coach Shakya and team captain Bimal Gharti Magar had rued over the lack of enough friendly matches against strong teams before leaving for the UAE.

DEFENSIVE MISTAKES
Nepal began the qualifying campaign with humiliating 5-0 defeat against the UAE and faced identical 2-0 losses against Uzbekistan and Lebanon in the remaining two matches. All three matches had similarities, which were costly defensive mistakes from Nepali defenders.

Nepali players playing in their own half to invite the pressure from opponent attackers and failing to mark them properly, attempting stupid fouls in the danger zone to concede penalties were the major reasons behind conceding nine goals.

“All the goals we conceded were the outcome of our own mistakes. In many occasions, my players invited the pressure by themselves playing the ball in their own half which helped the opponents snatch the ball to make attack,” said head coach Shakya.

“Opponents were physically stronger than us. My players couldn't mark them properly and lost the air balls in many occasions,” added Shakya. “The physical fitness of my players also was very poor, maybe that was because of short training.”

Meanwhile, Shakya pointed out the hot temperature of the UAE as one of the reasons behind his players failing to play up to the mark. “Since we don't have habit of playing in such hot temperature my players found it difficult against the opponents who are habitual to it,” added Shakya. He also said that conducting preparation in places with hot temperature would have helped Nepali team.

NO LEAGUE, LIMITED OPTIONS
All Nepal Football Association (ANFA) had called up 40 players for the preliminary squad but only 28 including members of the national team turned up for the training. Most of the players were known faces having played with Nepal's national team and under-age sides in different international competitions.

Since the ANFA has been failing to organize league from last three years, the production of players has been stalled leading to the scarcity of new players for the national team and U-23 team.  As head coach Shakya was compelled to choose the players from a small pool, the members of the national team were repeated in the U-23 team as well.
“If the country had regular league, we would have got more options regarding the selection of players. Due to absence of the league, we are compelled to select the players from small pool,” said Shakya.

Absence of league perturbs not only players, but also coaches: Nabin Neupane

KATHMANDU, Dec 13: In modern football, a player’s ability of playing in numerous positions is regarded as his biggest asset. Whenever a... Read More...