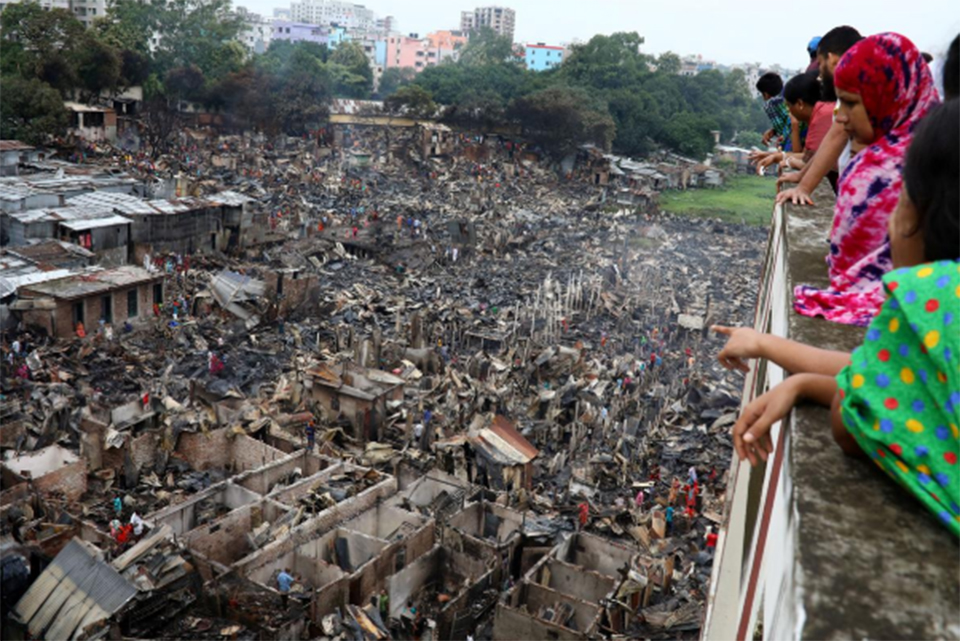 People look on to the slum that burnt out in Dhaka, Bangladesh, August 17, 2019. REUTERS/Mohammad Ponir Hossain

DHAKA, Aug 18: About 3,000 people in Bangladesh were left homeless after a massive fire consumed several hundred shanties in a slum on the northern outskirts of the capital city of Dhaka, government officials said on Sunday.

Three people were injured in the blaze that struck a congested slum in Mirpur town on Friday night.

Video footage showed heavy plumes of smoke billowing all around the slum area, just a few kilometers from the country’s main cricket stadium.

“According to our investigation committee 1,200 shanties were damaged and out of this 750 shanties burned totally,” said Enamur Rahman, junior minister for Disaster Management and Relief.

There were no fatalities as most residents were away celebrating the Muslim festival of Eid al-Adha, officials said.

Rahman said the government will initially provide a total of 500 tonnes of rice and 1.3 million taka ($15,476) for everyone affected and authorities were looking into the reason for the fire and to assess the extent of the damage. He rejected some news reports that said many more homes were destroyed.

Fires at factories, slums and markets are common in Bangladesh. At least 25 people were killed in March this year when fire broke out in a 22-storey commercial building in Dhaka’s upscale area of Banani.

DHAKA, Feb 21: The death toll from a fire in a centuries-old area of the Bangladesh capital, Dhaka, jumped dramatically... Read More...

A traitor like Madhav Nepal has no space in the party: UML Chairman Oli
10 hours ago
Only 16 percent of construction of Kathmandu-Terai expressway completed in past four years
10 hours ago