A Dalit settlement awaits land ownership for over four decades 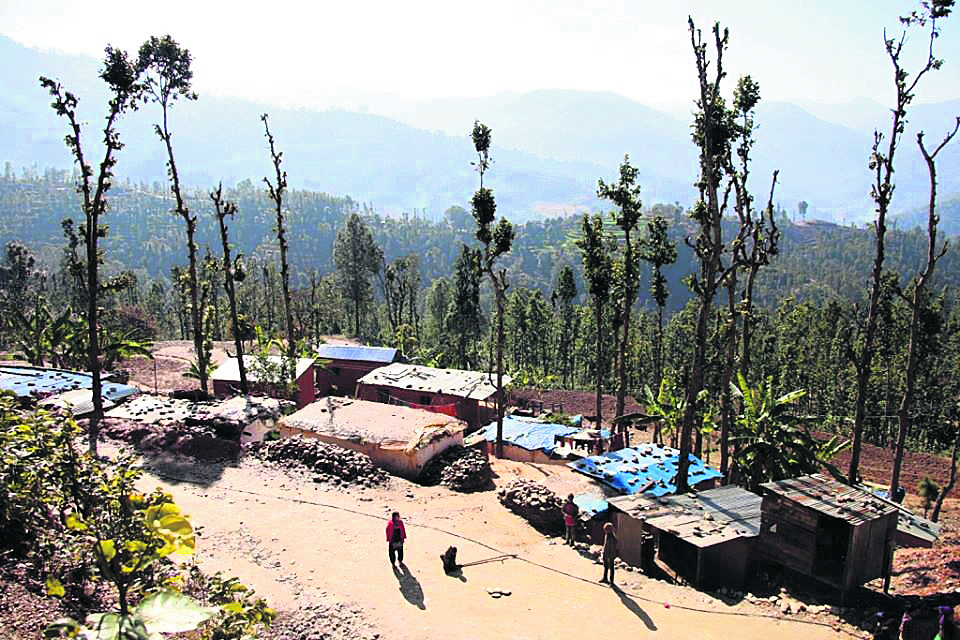 Govinda KC/Republica Huts of Dalits in Ratimate village of Dailekh. Sixteen Dalit households here do not have land ownership certificates.

DIALEKH, Feb 12: It has been around 47 years since Lal Bahadur Nepali of Narayan Municipality-1, Ratimate, has been making rounds of various government authorities and the houses of political leaders seeking an ownership certificate of his land but to no avail.

Despite decades of futile efforts, he and his family still have a ray of hope that they will one day be able to live freely in their land without the fear of being kicked out. Sixteen Dalit households of Ratimate do not have the ownership certificate for their land. During each election, political leaders and representatives assure to solve their problem but they hardly show up after being elected.

In these almost five decades, dozens of governments have been formed but the Dalit community of this village is still dealing with their old problem. Villagers here are deprived of state services due to the lack of land ownership certificates. This has also been a major reason why these people have not been able to uplift their living standard in all these years.

Ramu Nepali of the same community wandered from places to places to find a way out to his problem. He urged every possible leader and authority to provide him with the ownership certificate of his land but he always returned home disappointed. He laments that people like him are deprived of the land ownership certificates because they do not have a connection with high-level authorities and leaders. By building their homes on empty lands, these people started living here years ago. However, they accuse the other locals of co-operating with the Land Survey Department and trying to evacuate them from their land by blaming that they are living on forest land.

Recently a concerned committee was formed under the coordination of the ward chief to provide these people land ownership certificates. However, the committee is yet to start its work. "Though our issue has become the agenda of each political party during elections, our problems remain to ourselves at the end," said another victim Lal Bahadur Nepali.

Due to the lack of land ownership certificates, these people do not even have access to drinking water, electricity and other amenities. Though these people have been conserving and protecting the Shreesthan forest, they are not allowed to use its resources. Earlier, an organization named Fiyan Nepal advocated for five years the rights of these people. Following which, Narayan Municipality has forwarded a work plan to identify the real victims through investigation and provide them with land ownership certificates.

Social activist Bishal Sadashankar stated that these 16 households have been intentionally excluded from the list of property owners as many other people living in the same land have ownership certificates. "Those belonging to the so-called high castes have land ownership certificates but these people don't," said Sadashankar, adding, "These Dalits are not living in the forest area. They deserve the ownership of their land."

Rs 28.8 million plus revenue exempted as women register land plots in their names

KATHMANDU, August 5: The District Land Revenue Office, Tanahun, has waived off more than Rs 28.8 million in the fiscal... Read More...

Guthi land in Dang changing hands with simple paper accord

RUPANDEHI, Jan 27: In each election, land ownership certificates for the people of Rudrapur village in Rupandehi district becomes a... Read More...

1,051 people infected with dengue in a single day
31 minutes ago