A sense of déjà vu 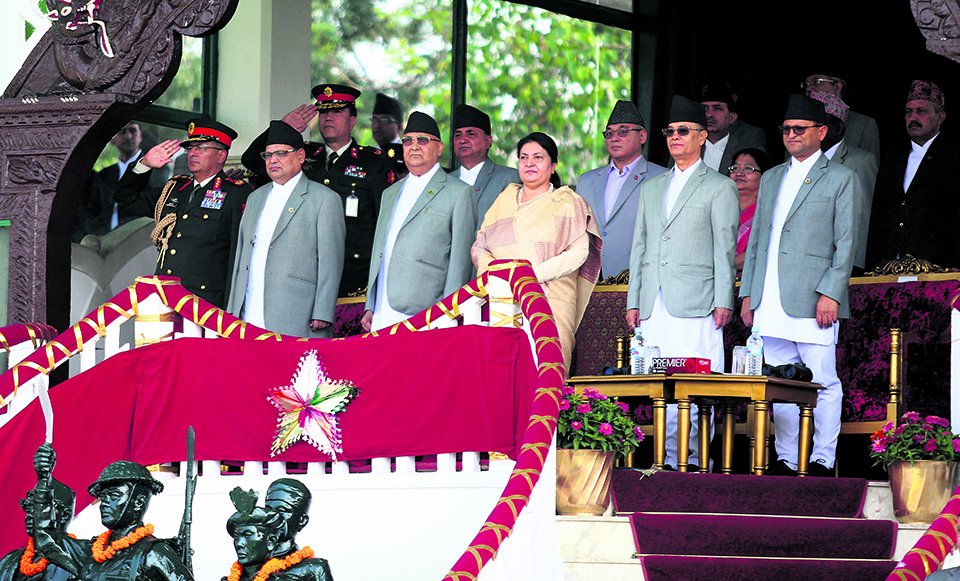 This Republic Day passed just like all the other days that we designate to commemorate important national milestones, with the sort of lukewarm remembrance that borders on indifference. Apart from presenting the budget of the government, by the government, and for the government, there wasn’t a whole lot that happened during the day. Well, we all got a message from Nepal Telecom too, on behalf of our government wishing our families a Happy Republic Day but that was it.You could be forgiven for thinking that Republic Day wasn’t all that important given the complete absence of activity to reflect on what the leaders had us believe was an important cornerstone of the new Nepal.

Our remembrance was limited to Madam President – the very symbol of our republicanism – taking part in yet another inauguration. Mercifully, this time it wasn’t a lift but an entire chunk of open space called Freedom Park on the grounds of the Narayanhiti Palace Museum, a park which ideally should have been opened to the public a couple of years ago. Anyway, better late than never and we have one more open space in the capital where people can go and relax but which, in all probability, will be taken over by broke and desperately frisky lovers engaging in not so private displays of affection like they do in Sheetal Mahal.

Anyway, at the start of this week, while our government was busy planning nothing for our hard won republicanism and everything to please everyone in the budget – from civil servants with their salary increase to lawmakers with the hike in their constituency development fund – one disgruntled man was thinking of brewing up some old fashioned terror. Biplav and his cadres  were busy cooking up a plot before incompetence and some bad luck ensured a tragic end for some of his followers and a more than successful ‘banda’ the next day.

This government (or at least the Maoist faction of it) has traditionally shown reluctance to deal with one of their own – whether it is their maneuverings in the case of Bal Krishna Dhungel, assorted Maoist combatants and now Netra Bikram Chand.  This halfhearted rhetoric and the measures taken to deal with him is emboldening him and giving him more publicity.

The two options to dealing with him are pretty straightforward – either call him for talks or go on ahead and capture him. I mean, if diplomacy, some tact, and concessions can work for an eccentric (for lack of a better word) secessionist like CK Raut, it would be fair to assume that Biplav could be malleable with the right sort of give and take. But our government has chosen the third option of pulling the wool over our eyes – which basically entails a lot of rhetoric and posturing along with some token arrests and branding his party a terrorist outfit.  But a lot of analysts and seasoned political observers suggest, this is all too convenient – it suits the Maoist faction of the ruling party to have an armed faction on the outside – unencumbered by any rules of engagement or political compulsions.

For the foreseeable future, we are going to have to live in some amount of fear as he is basically given free rein to surface here and there and carry out his so called ‘subversive’ activities even while our politicians talk the tough talk on him. And in the most laughable and richly ironic statement of the year, our very own Chairman of the Nepal Communist Party, Prachanda has stated in a response that political objectives cannot be fulfilled by terrorizing people and spreading terror.

I’m not sure if he does sarcasm or not but that was quite the statement from a person who rose to prominence doing, well, exactly that! Well, I think he and his friends are still under the impression that the decade long conflict was a ‘people’s war’ and all that was done was for the people. I guess for people like Biplav, the people’s war – which no one really wanted in the first place – never really ended.