A day at the Golden Temple 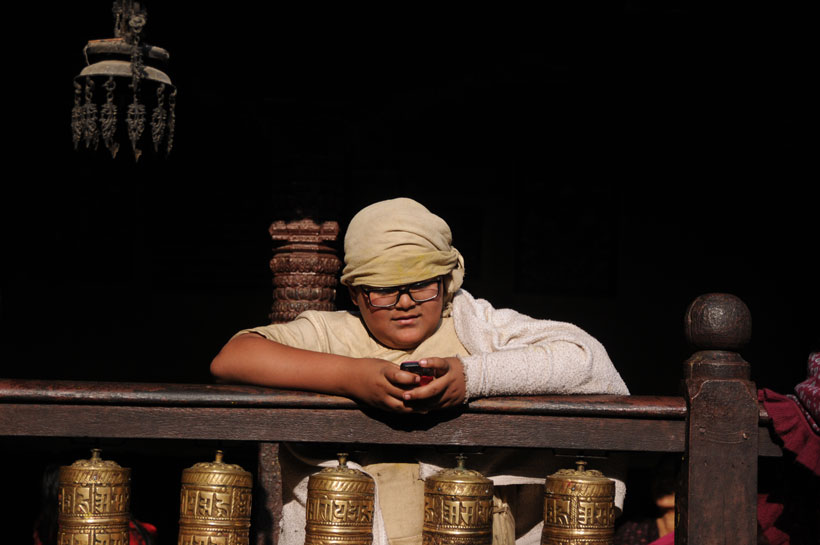 Hiranya Varna Mahavihar or Golden Temple is only a five-minute walk from Patan Durbar Square in Lalitpur. Yet many people in the immediate neighborhood and Kathmandu don’t know about it. Though named Golden Temple, it is actually a Buddhist monastery with gilded metal plates covering most of its frontage. The monastery has a ticketing service of fifty rupees for foreigners. When asked what about the Golden Temple appeals to them, a foreign couple said, “We are fascinated by the architecture of this closed courtyard Buddhist monastery which is unique. The carvings have a lot of detail. And, it is so peaceful.”

This three-roof monastery was built in the 12th Century by King Bhaskar Verma and is adorned with a golden facade, four large gateways, a clock tower, and two lion sculptures. The main priest here is only twelve years old, replaced after a month of service. The place is a serene getaway from the hustle and bustle of the busy Patan alleys. It is clean with seating spaces to relax and to forget about your worries for a bit while marveling over the temple’s deep cultural significance and intricate architecture.

The secretary of Golden Temple, who had also served his term as a principal priest, Lok Nath Shakya sheds light on the history and uniqueness of the place. Hiranya Varna Mahavihar’s name hiranya, which means mouse, comes from the myth of a golden mouse that chased cats. Its entrance doorway has two wooden struts carved with two important Hindu gods, Shiva and Vishnu who safeguard the place. And, the entrance door of the temple when closed pictures a carved Bhairab that is believed to safeguard people from any bad happenings.

The second door has carvings of Buddha depicting the path of practicing paramita to achieve Bodhisattva. Shakya says that the first step begins by loving others. The third door has a carved statue of the God of three yans – Śrāvakayāna, Mahāyāna and Vajrayāna, and it leads to the main courtyard. The main courtyard is the place where all the ceremonial worships take place. The wings lead to gumbas and rooms for conducting ritual feasts. The gumbas includes a wheel of life, giving off a very ‘Doctor Strange’ effect.

The principal priest of Shakya descent should be under twelve years old. Shakya says that male children of such age are deemed suitable as the Panchasheel is maintained at that age – a child doesn’t kill, tell lies, steals, has corrupt thoughts, and drinks or smokes. You will most often find the priest dressed like a ‘Bhikchhu’ and using his phone while basking in the sun when not wrapped up in his religious duties. When asked about his experience, he said he felt free. “It is difficult as I have to purify myself by bathing even when I go to the toilet. But, I feel free because nobody scolds me or makes me cry. I don’t have to do any work and I’m loved by everyone because God loves the principal priest,” he explains. The little priest even says that God often comes in his dreams and tells him to show the mirror. When asked about the mirror symbolism, Shakya says that early in the morning the priest shows the mirror to the main deity and after that the mirror is shown to all the devotees present at that moment. It is meant as a symbolism for people to get rid of all evil thoughts, anger, and selfishness.

The temple is much bigger from the inside than it seems from the outside, especially given that one enters it through a narrow lane. The tiers make for great viewing from an architectural perspective. The artwork is intricate and very detailed, and will make you wonder how such fine craftsmanship is even possible.

There are seating spaces or ‘falcha’ along the passages around the temple. Many locals seeking for a day’s rest, a quiet time or a good bask in the winter sun come here. The monastery is also filled with tourists with camera slung around their necks. Guides accompanying them will be in deep conservation revealing the meaning behind the cultural practices and architectural symbols.

Tourists who want to read or just love to write can be seen dotting the premises as well. The place is really quiet despite the coming and going of devotees and ongoing ceremonies. The spinning of prayer wheels, the butter lamp offerings, sights of devotees putting on red tilak and smell of incense lend the place a calm and meditative tranquility.

The Golden Temple and magical experience

YES I made it! This year I visited The Golden Temple in Amritsar, Punjab, India. Not on purpose but there... Read More...

A year and half on, quake-damaged Golden Temple awaits reconstruction

Bolt holds on to win 100 metres at final Golden Spike

Our government was overthrown with the help of reactionaries: Oli
13 hours ago
Finance Minister Sharma looks to announce new budget for FY 2021/22
11 hours ago