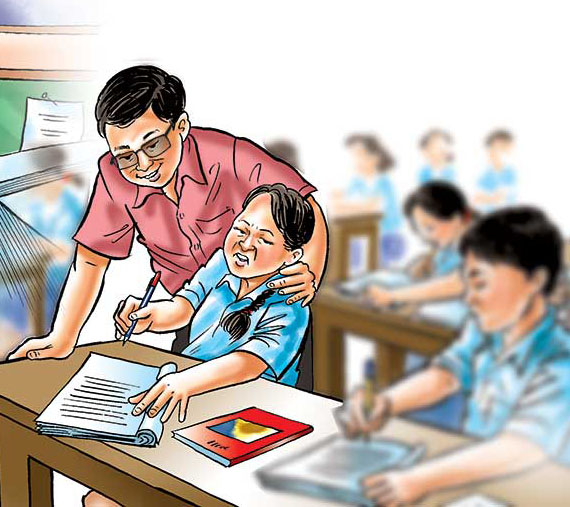 Kathmandu, March 9: In the four months of the current fiscal year, a total of 98 incidents of sexual harassment to children have been recorded in the country.

The Central Child Welfare Board maintained this recorded with continuous monitoring the data brought forth by the various media. Among these, 97 victims were the girl children who were raped, while a boy child was sexually abused by a foreign national.

The revelation has alarmed the wider stakeholders because it becomes a commonplace crime despite continued advocacy against it.

A Swiss national named Peter made acquaintance with a child through Facebook and finally abused the boy. Legal action has initiated against him.

Board's Information Officer Ram Bahadur Chand shared that among these violence, 12 girls were the victims of gang rape. Two such girls have now developed mental problems.

Further segregation of data showed that 36 girls were raped by the relatives, 19 by neigbours, 11 by unidentified persons, 6 by teachers, 4 by house owning members, and 3 by government employees.

Moreover, 17 are the cases of incest, among which father is the rapist in 9 cases. Among the perpetrators, 15 are boys and the people over 60 have raped seven girls, added the Information Officer.

Central Child Welfare Board's former executive director Tarak Dhital says it is primarily the responsibility of the parents to protect their children from harmful practices and atrocities as violence, abuse, exploitation, discrimination, kidnapping, neglect and bullied.

The youngest victim is from Mahottari. The perpetrators kidnapped an eight-month-old girl and killed her after rape in Mahottari. The highest numbers of victims are mostly girls of the age group of 11 years to 14 years.

Among the incidents, the rape and murder of 13-year-old Nirmala Panta of Kanchanpur is the most talked about case. The facts and truth behind this rape and murder have not come in public and police investigation is still on in this connection.

Not only the girl child is sexually abused, they are also the victims of rape, child marriage, murder, child labour, trafficking, abduction and physical and mental torture.

There is need of collective and concerted efforts from the side of the state, civil society and parents for reducing the growing incidences of all forms of abuse against children and for ensuring protection of the rights and wellbeing of children. RSS