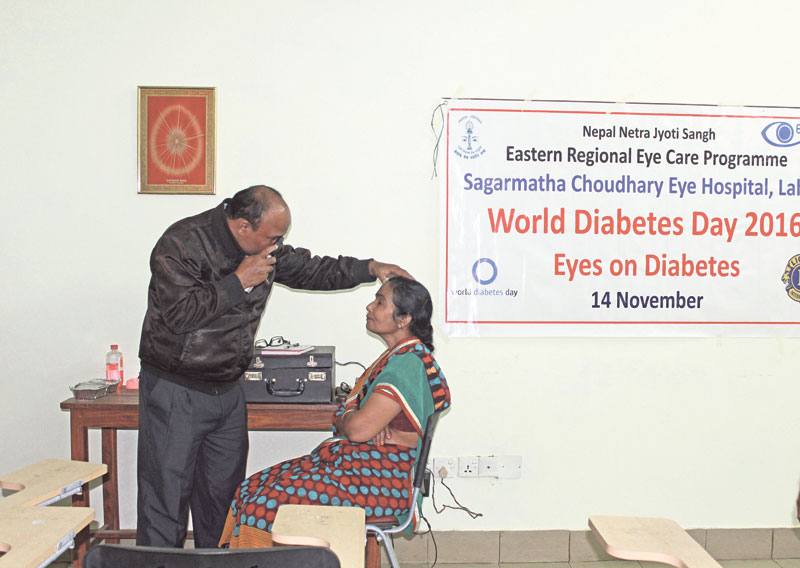 Eye specialist Dr Puja Rai Gautam states that retina of an eye is among the sensitive areas of body where high level of sugar can easily harm. In initial stages, the retina gets swollen and then if not treat on time, the retina could get damaged. “When retina starts to swell, the patient should seek medical treatment. If ignored and higher level of sugar persists in the body, retina starts bleeding,” she said adding that due to lack of awareness about the illness and its symptoms many diabetic patients loose eyesight.

Dr Gautam was speaking at an eye camp organized at the Sagarmatha Chaudhary Eye Hospital (SCEH), Lahan on Monday to mark World Diabetes Day as part of the worldwide ‘vision 20 / 20’ eye care campaign.

“People have some awareness about cataracts but diabetic retinopathy is a new topic to most. As more and more people are suffering from diabetes, we need to be very much careful about eyes,”

According to her, sedentary lifestyle and consumption of unhealthy, packaged food are some of major factors behind health problems. “When you are suffering from higher level of sugar, and you don’t seek treatment on time, you are likely to develop problem with eyesight,” she said while counselling a group of patients. She added that people suffering from higher level of sugar are more prone to have eye-related problems.

Doctors at the program stated that over one million people in Nepal are estimated to be suffering from diabetes. And most of them suffer from eyesight problems. They informed that diabetic patients often come late for treatment because of ignorance.  “Diabetic patients seek medical help only when problem gets severe. This makes it difficult to treat their eyes,” said Gautam. “Once retina is seriously damaged, it is hardly possible to recover the eyesight.”

When a person is suffering from higher level of sugar, he or she is likely to have blur vision. If instant medical attention is sought, cure becomes easy, the doctor said. “Sometimes patients are not aware that they are suffering from diabetes. Everything seems normal for them until diabetes affects eyesight and blurs vision.”

Abhishek Roshan, manager at the SCEH, informed that diabetic retinopathy is fifth among the reasons of blindness in the world. “If intervened on time, eyesight could be fully recovered through laser therapy. However, if patients fail to seek medical help on time, they might lose their eyesight,” he said adding that even in developed countries across the world, where people are relatively better informed about the disease, diabetic retinopathy prevails.

According to the data of World Diabetes Organization, 382 million people in the world suffer from diabetes. Doctors suggest diabetic patients to have eye check up in every three months. “Most of the patients do not go for checkup unless the suffering does not become acute. Because of this tendency numbers of diabetic patients losing eyesight to diabetic retinopathy across the country are increasing day by day,” he said.

“A club has been established to raise awareness among people. What to eat, what not to eat, what kind of exercise to follow and how to notice changes in health. These are important things people should understand. Even a little knowledge or tip can make a great difference,” he said. “Losing eyesight just due to lack of awareness is very unfortunate.”

He informed that 315 of the 2151 eye patients that sought treatment at the hospital were suffering from diabetic retinopathy. And added most of them were not aware of being diabetic.

On Monday, six of the 40 eye patients were diabetic. “These patients had no idea that they were having eye problem because of high sugar. They visited hospital because they begun to have blur vision and someone suggested them to seek medical help.”

‘With more mountaineers, Everest is losing its dignity’

KATHMANDU, June 2: A freelance rescue pilot in the Mount Everest has said the world’s tallest mountain is losing its dignity... Read More...

GULMI, Jan 26: Most of the candidates who contested the parliamentary and provincial elections of December 7 have submitted the details... Read More...