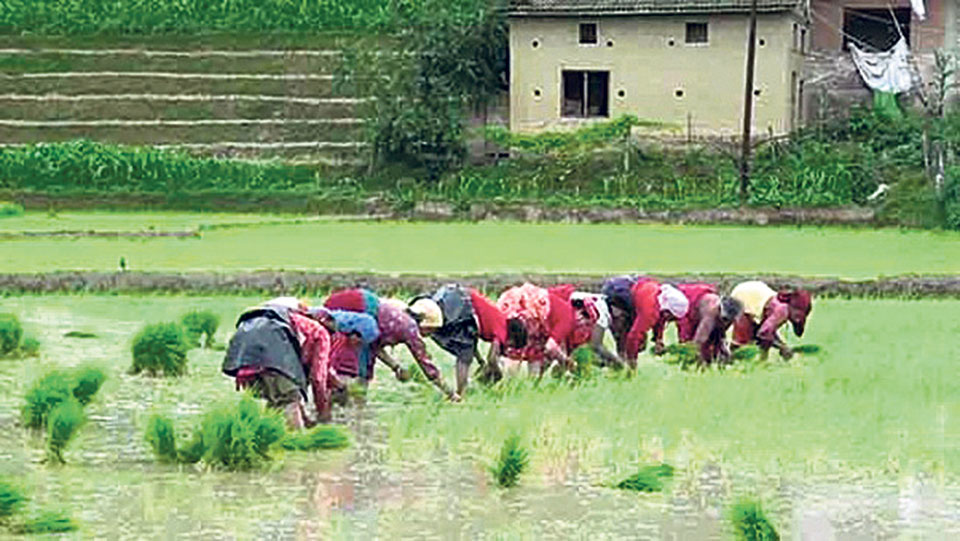 KATHMANDU, Aug 9: Paddy plantation across the country has almost been completed, with 92.24 percent of the country's 1.6 million hectares of paddy field already planted as of Monday. The plantation was expected to be completed by the end of July.

The erstwhile far-western Dev region has the most plantation, with 99.02 percent of the 176,560 hectares of land planted with paddy. Two districts in the region -- Kailali and Kanchanpur -- have completed 100 percent paddy plantation.

The lowest plantation has been seen in the erstwhile western Dev region, with just about 85.37 percent of the 445,938 hectares completed.

Paddy, a staple crop, accounts for one-fifth of the total agricultural output of the country. About one-third of the paddy acreage of over 1,420,169 hectares is completely dependent on rain water. According to the ministry, the amount of rainfall this year has been appropriate for paddy harvesting.

A projected 5.4 million metric tons of paddy products will be yielded this fiscal year. If plantation gets ruined due to any reason, the country will suffer a great loss like it did in the Fiscal Year 2015/16 when it had the lowest yield of the past four years. However, the ministry expects the crop yield this year will be higher than in the previous years.

Shankar Sapkota, deputy spokesperson for the ministry, said: “We are excited about the yield this year as plantation has been better than in the previous year.”

The ministry is hopeful that paddy production this year will reach a total of 5.23 million tons. According to Sapkota, as plantation is done until the end of August, the yield is likely to further go up.