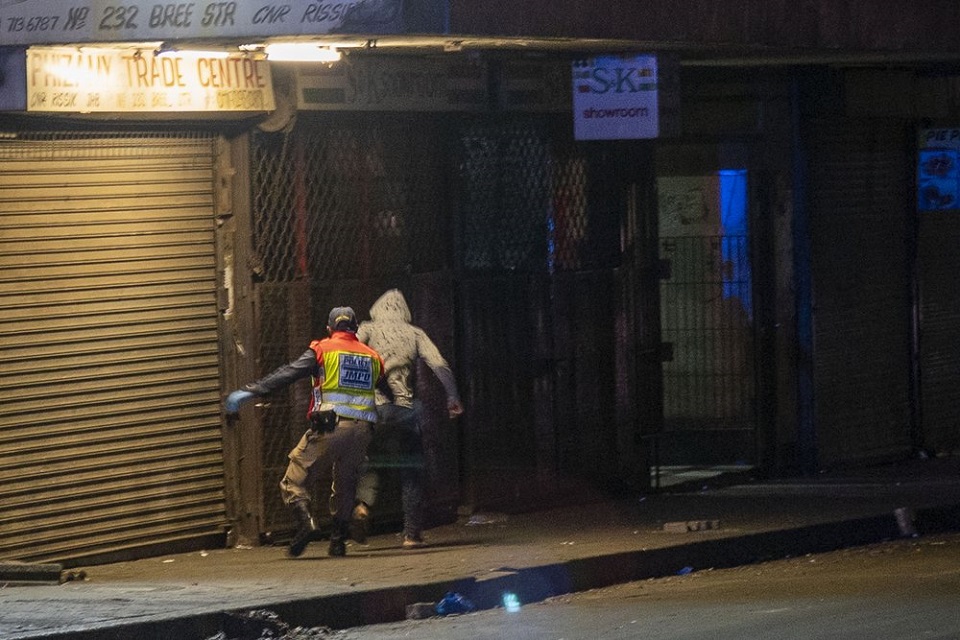 A police officer chases a man who violated the lockdown downtown Johannesburg, South Africa, Friday, March 27, 2020. Police and army started patrolling moments after South Africa went into a nationwide lockdown for 21 days in an effort to mitigate the spread to the coronavirus. The new coronavirus causes mild or moderate symptoms for most people, but for some, especially older adults and people with existing health problems, it can cause more severe illness or death.(AP Photo/Jerome Delay)

JOHANNESBURG, March 27: South Africa on Friday announced its first two deaths from the coronavirus as the country’s cases rose above 1,000 and a three-week lockdown began.

The health minister in a statement said the deaths occurred in Western Cape province, home of Cape Town. South Africa has the most virus cases in Africa, where cases across the continent are now above 3,200.

South Africa’s military was in the streets helping to enforce measures that include bans on alcohol sales and dog-walking. Concerns are high about water supply and social distancing in crowded, low-income townships.

People are meant to go outside only to obtain essentials such as groceries or medical care or to provide essential services. Public transport with limits on passengers is operating only during the usual rush hours, but complaints quickly were reported of operators charging double the price.

JOHANNESBURG, Oct 6: Fifteen clinical trials of COVID-19 vaccines are underway across the African continent, according to a comment published... Read More...

China counts 106 virus deaths as US, others move to evacuate