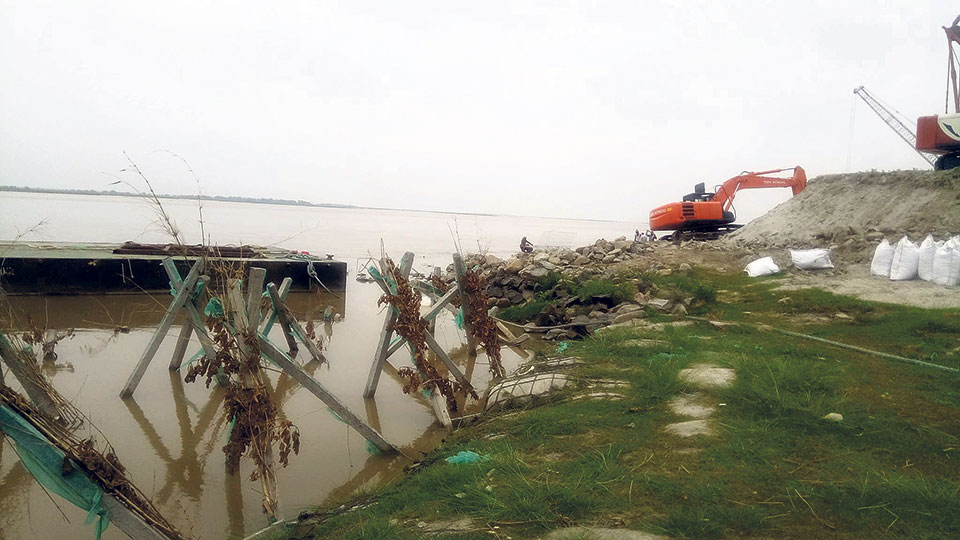 Excavators on the eastern bank of Koshi River diverting the flow of the river from the Indian territory on Saturday. Photo: Jitendra Kumar Jha/Republica

RAJBIRAJ, May 26: At least 90 families in Gobargadha of Saptari district have been trapped by the Koshi River after the Indian side diverted its water to the western side on Friday.

Local authorities said  about 300 people are now encircled by the Koshi, the biggest river in the country. The Indian side released water from a pilot channel built along the western side of the river despite protests by the locals.

With water suddenly released from the 17 km pilot channel built on the western side of Gobargadha  Friday evening, the riverside village has turned into an island,  trapping the local residents .

Hanumannagar Kankalini Municipality Mayor Sailesh Kumar Sah said  rescue efforts for the trapped locals have been started and telephone links with some of them restored. “Locals should have been informed prior to releasing water . But the Indians  released it without any notice, and hence the  disaster,” Sah told Republica. “If prior notice had been given we could have evacuated our citizens to  safer ground.”

Ward No. 12 of the municipality lies along the riverbank but was not inundated so far as most of the water used to flow along the eastern side of the river . Koshi water overflowing the channel has swept away half a dozen boats including two emergency boats belonging to the municipality, firewood, timber and livestock, according to locals.

“If the situation continues we cannot rule out a disaster and loss of life in the trapped settlement,” Mayor Sah said. He also vented ire against the Indian ‘monopoly’ over the Koshi  embankment.

“The Indian side should have worked within the territory  mentioned in the Koshi accord but they have built the channel three kilometers west of the land they leased through the Koshi accord, which is against  international practice,” Sah said.

The local government has claimed that the District Administration Office, the Home Ministry and the Prime Minister’s Office were informed five months ago about the construction of the pilot channel by the Indians.

The Koshi had breached its eastern embankment, inundating hundreds of Nepali and Indian villages, in 2008. After that, while repairing the damaged embankment, India tried to divert the Koshi  flow more toward the western side adjoining Saptari district.

Locals have accused India of trying to divert the Koshi  to save Indian settlements while putting Nepali villages at risk of inundation.

“Indian strategy has posed a threat of displacement to half a dozen settlements on the Nepal side and increased the risk to the western embankment,” said Ghanashyam Jha, who has been advocating for  Koshi victims. “India has been taking the benefit as our government remains mum on this issue.”

India  invested more than 1.5 billion Indian rupees after 2010 to save  the Indian settlement on the eastern side of the river. With the Koshi flow diverted toward the western side, a dozen villages including Bhardaha, Yoginiya, Hanumannagar, Inaruwa, Rampura, Gobargadha and Tilathi  have been at risk of inundation during the monsoon.

The Koshi flood on the Saptari side  inundated nearly 1,000 houses for nearly three weeks in the last monsoon.

LAHAN, Oct 20: The water level in the Koshi River has crossed the danger level, prompting the authorities to turn... Read More...